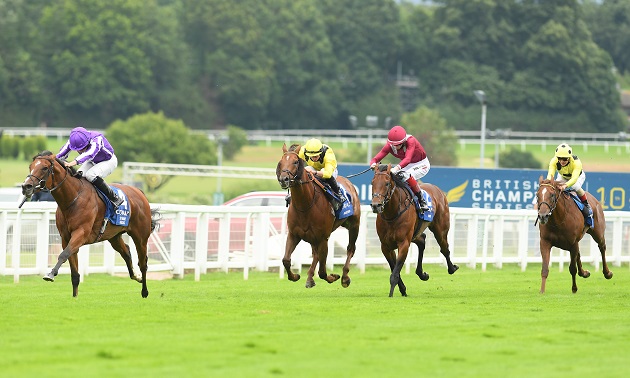 The Coral-Eclipse (15:35) at Sandown on Saturday is available as a free Race Pass, which means logged-in customers can view all our premium comments and ratings.

Only six runners are set to go to post for this year's Coral-Eclipse (15:35), one of the most prestigious races of the summer, but there is plenty of quality on show with five previous Group 1 winners and the runner-up from the Prince of Wales's Stakes making up the field.

The five-year-old Mishriff (135) sets the standard on Timeform's weight-adjusted ratings as he tries to better his third-place finish in this race 12 months ago. Mishriff is a top-class performer on his day, as he showed when winning last year's Juddmonte International at York, quickening clear in the final two furlongs to land the spoils by six lengths. A repeat of that form will give him every chance here, though there is a chance he might need the run on his first start since flopping in the Saudi Cup in February.

Mishriff is joined in the line-up by stablemate Lord North (128) – they are both trained by John and Thady Gosden, who have the 'Hot Trainer' Flag to denote that their yard is in rude health. Lord North was below form when finishing last of five in the Prince of Wales's Stakes at Royal Ascot last time, though he had valid excuses as he started very slowly after his rider took an age to remove the blindfold. He is better judged on his previous efforts this season (including when dead-heating in the Dubai Turf at Meydan in March) which show that he still retains a very smart level of ability at the age of six.

Bay Bridge (131p) ran creditably when filling the runner-up in the Prince of Wales's Stakes, passing the post just a length behind the winner, State of Rest, despite leaving the impression he wasn't fully letting himself down on the ground. That performance earned him the 'Horse In Focus' Flag and he could be worth another chance to confirm the promise of his victory in the Brigadier Gerard Stakes over this course and distance in May. The manner of that win suggests he may yet have a bigger effort in the locker now back on good ground for Sir Michael Stoute, who also has the 'Hot Trainer' Flag.

Alenquer (129) had the likes of State of Rest and Lord North behind him when gaining a first Group 1 success in the Tattersalls Gold Cup at the Curragh six weeks ago, showing a willing attitude to get the verdict by a neck. A versatile sort and seemingly an improved model as a four-year-old, he should continue to be a force at this level for William Haggas, another with the 'Hot Trainer' Flag.

The pick of the two three-year-olds in the field looks to be the French raider Vadeni (132p), who could hardly have been more impressive when winning the Prix du Jockey Club at Chantilly last time, showing a smart turn of foot to win by five lengths in decisive fashion. That was a high-class performance and he has the 'Horse In Focus' Flag to denote that he is very much one to keep on the right side. He is certainly open to more improvement and it will be interesting to see what he can do here after he was supplemented at a cost of £50,000 on Monday.

The field is completed by Native Trail (132), who was Timeform's highest-rated two-year-old in 2021. He registered his third Group 1 success in the Irish 2000 Guineas at the Curragh last time, winning by a length and three-quarters without needing to improve on the form he showed when filling the runner-up spot behind stable companion Coroebus in the 2000 Guineas at Newmarket. Those two runs have seemingly exposed his limitations at a mile, but it's not impossible that the step up in trip today could eke out a bit more improvement, lining up for Charlie Appleby who also has the 'Hot Trainer' Flag.

None can be ruled out in a fascinating Eclipse yet it's hard to side against Vadeni who was a sparkling winner of the Prix du Jockey Club and can reward connections' decision to supplement him for £50 000 in the week. Bay Bridge saw his winning spree ended at Royal Ascot but shouldn't be written off provided ground conditions remain with some ease, while high-class miler Native Trail can't be discounted now he steps up in trip and it would come as no surprise to see Mishriff bounce back.