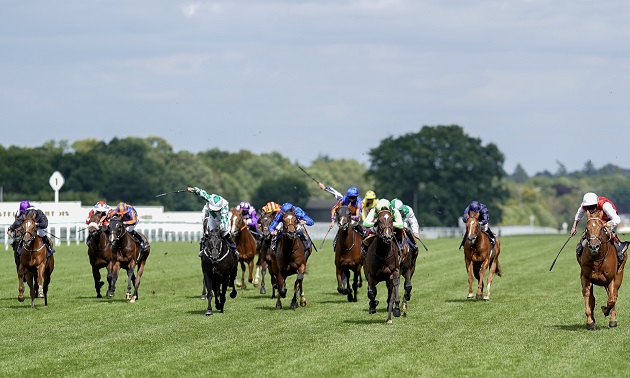 The Commonwealth Cup at Royal Ascot on Friday is available as a free Race Pass, which means you can view all our premium comments and ratings.

The Commonwealth Cup (15:40) has quickly become one of the highlights of the meeting since it was added to the Royal Ascot programme in 2015. There have been some high-class winners of the race, including Muharaar and Caravaggio, and this year's contest promises to be a cracker with 21 slated to head to post.

Timeform's weight-adjusted ratings are headed by the French filly Suesa (133p), who has won all four of her starts at Chantilly, including a pair of Group 3s this season. She had little trouble brushing aside a subsequent listed winner last time, impressing with how readily she put the race to bed, and the 'p' attached to her rating denotes that she is likely to improve further.

Method (125p) is the only runner in the line-up with the Horse In Focus Flag. The Flag is awarded to runners who shaped so well that they are likely to be of interest next time, and Timeform's reporter was clearly impressed by how Method moved through much of the race on his return at Haydock. He ended up finishing fifth, but he was still upsides over a furlong out before fading in the style of a colt who would come on for his first start for seven months.

Happy Romance (120), Lipizanner (118), Saint Lawrence (124) and The Lir Jet (126) all have the Horses For Courses Flag, highlighting that they are effective on courses that provide a similar test.

The other Flag worth noting is the Sectional Timing Flag awarded to Diligent Harry (121p) for his power-packed finish on AW Championships Finals Day. Diligent Harry stormed home to land the 3-Year-Old final, bringing his career record to three wins from four starts, and the time he clocked inside the final couple of furlongs suggests that he could have even more to offer.

SUESA has passed each of her 4 Chantilly assignments with flying colours and is every inch a Group-1 filly in the making, so she can take this prize across the Channel for Francois Rohaut. Fellow overseas raider Campanelle landed the Queen Mary at this meeting a year ago and 6f looks her ideal trip so she is feared most, with Method interesting of the home contingent.

Just click here to view the full card and Timeform analysis for the Commonwealth Cup at Royal Ascot on Friday. You can subscribe to Race Passes to access every race here.