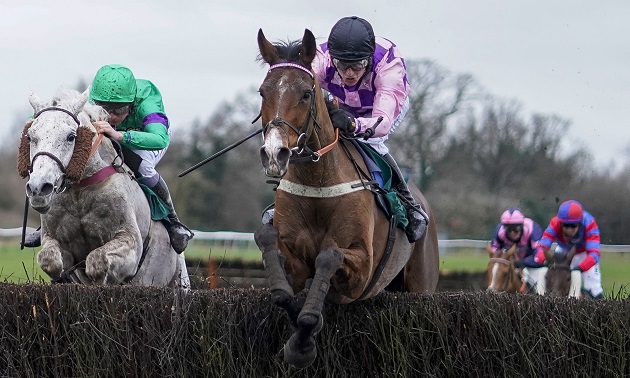 The Classic Handicap Chase (15:00) at Warwick on Saturday is available as a free Race Pass, which means you can view all our premium comments and ratings.

This looks like a strong renewal of the Classic Handicap Chase (15:00), featuring a mix of progressive young chasers and seasoned handicappers.

Timeform top-rated Gericault Roque (156p) falls firmly into the first category as he has only recently turned six and is still looking for a first win over fences. Gericault Roque may have been beaten on all three starts since going chasing but he is progressing well and has simply been unlucky to bump into a pair of well-handicapped rivals the last twice.

At Chepstow Gericault Roque was runner-up to Pats Fancy, who has since defied a 10 lb higher mark, and at Newbury he filled the same position behind an improving young rival who was completing the hat-trick. The way Gericault Roque went through that race at Newbury, jumping fluently and travelling powerfully, suggested that he is a progressive handicapper to keep on the right side, and that performance earned him the Timeform Horse In Focus Flag, identifying him as one to consider closely next time.

The other runners here with the Horse In Focus Flag are Corach Rambler (150p), Padleyourowncanoe (153) and No Rematch (154p).

Corach Rambler is arriving in search of a hat-trick having won novice handicap chases at Aintree and Cheltenham. He was strong in the betting at Cheltenham last month and he justified that support with more in hand than the two-length margin would suggest as he idled badly on the run-in after he tanked his way to the front. An 8 lb higher mark demands more, but he has been winning in the style of a chaser with a bigger effort in his locker.

The lightly raced No Rematch is another who hasn't shown everything that he has to offer. He was ultimately pulled up on his reappearance at Exeter last month, but he looked like a major threat for much of the way before the 10-month absence told. He had been a comfortable winner of a strong novice handicap chase at Chepstow on his only previous start over fences so it would be little surprise were he to prove better than this mark.

Padleyourowncanoe is another who is entitled to come on for his reappearance, which in his case was his first run for 15 months and first start since joining Dan Skelton. Padleyourowncanoe was a useful handicapper during his time with Colin Tizzard and he made an encouraging start for Skelton when third in a three-mile handicap hurdle at Haydock last month.

Notachance (?) came into last year's race on an upward curve and he got the better of a battle with Achille (155) to score by half a length, earning both the Horses For Courses Flag. Notachance was pulled up on his three starts following the Classic Chase, but he took a step back in the right direction when sixth in the Tommy Whittle last time.

Achille has been in better form as he shaped like a well-handicapped horse for much of the way when fifth in the Becher Chase and he then ran with credit to finish fourth in the Welsh Grand National. He is a 12-year-old now but is clearly holding his form and is still on a good mark.

A good mix of progressive and seasoned staying chasers. Gericault Roque fits into the former category and he looks tailor-made for this test judged on his excellent effort at Newbury. Corach Rambler is another who is firmly on the upgrade, while Notachance and Achille had an epic battle when first and second in this last year and could well figure again off the same marks.

Just click here to view the full card and Timeform analysis for the 15:00 at Warwick on Saturday. You can subscribe to Race Passes to access every race here.