Adam Houghton looks ahead to the three key novice hurdles at the Cheltenham Festival, utilising Timeform data from the last 10 years to see how the 2020 crop measure up at this stage.

The Supreme is the traditional curtain-raiser to the Cheltenham Festival and has produced some memorable moments in recent seasons, not least Altior’s demolition of Min and Buveur d’Air in one of the deepest renewals for many years in 2016.

Champagne Fever (165 in 2013) and Douvan (162 in 2015) may have produced efforts of similar quality to provide Willie Mullins with two of his six wins in the race, but the range of ratings achieved by Supreme winners in the last decade is greater than for any other novice hurdle at the meeting, with Menorah’s winning performance (145 in 2010) coming in fully 21 lb inferior to that of Altior.

Several of this season’s novices have already run to a higher level than Menorah managed at Cheltenham, but all bar Envoi Allen (152P) – the clear leader in this division who is perhaps more likely to run in the Ballymore anyway – will need to improve around 10 lb to match the 10-year average.

Envoi Allen’s stablemate Abacadabras (146p) is currently in pole position among the chasing pack, along with the Colin Tizzard-trained pair of Master Debonair (145p) and Fiddlerontheroof (144p), while others to consider include Janidil (145p) and Shishkin (143P). The former has gone under the radar slightly since winning a Fairyhouse handicap in December, while Shishkin showed plenty of ability when winning a Newbury novice in eye-catching fashion on Wednesday and remains open to significant improvement with that experience under his belt.

Unbeaten in three starts over hurdles, Envoi Allen is already at a level good enough to win an average renewal of the Ballymore, and, like Shishkin (who also has the option of lining up here), the large ‘P’ attached to his rating denotes that he remains capable of much better. 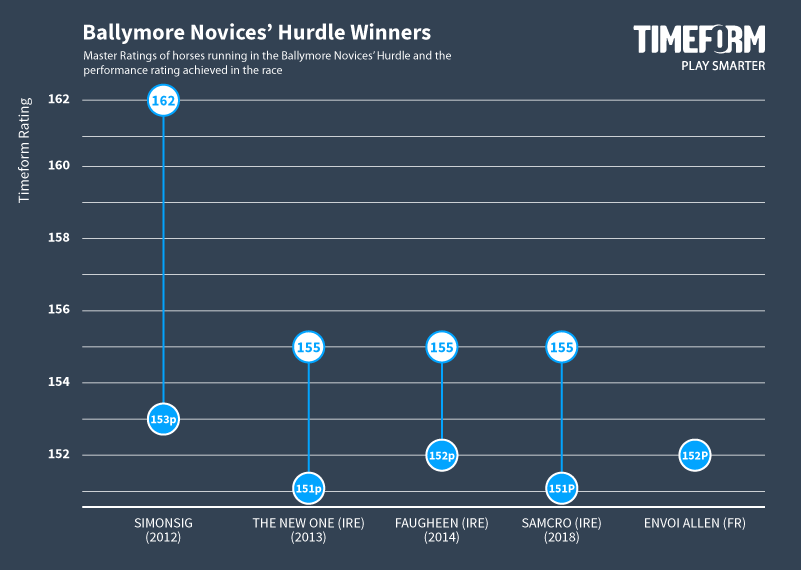 In terms of what that quartet had achieved prior to their Cheltenham date, Envoi Allen is tracking at the right level to suggest that he too has the potential to enter that elite bracket, and it’s easy to see why he is already trading at very short odds for this contest.

Away from those already discussed for the Supreme, Easywork (145p) rates a smart prospect after winning impressively over this sort of trip at Limerick on Boxing Day, while another Colin Tizzard-trained novice, The Big Breakaway (135P), could be anything after a pair of wide-margins wins at Newbury.

The Albert Bartlett generally takes less winning than the other novice events at the Festival, but it has still proved a good guide to the future in recent years, with the two best winners in the last decade, Bobs Worth and Penhill, both going on to enjoy further top-level success at this meeting.

A race that can develop into a gruelling test for young horses, it is potentially significant that seven of the last 10 winners came into the Albert Bartlett with at least four previous starts over hurdles to their name, and it would be no surprise if we see plenty of the leading contenders for this year’s renewal out again before the big day.

The pick of the main ante-post fancies on Timeform ratings is the Challow Hurdle winner Thyme Hill (144p), who has already run to the same level as Unowhatimeanharry and Kilbricken Storm did when winning lesser renewals of this race in 2016 and 2018, respectively. Admittedly, Philip Hobbs’ charge has made only three starts over hurdles and looks set to go straight to the Festival, but any concern about his inexperience for this race is largely offset by his considerable potential.

Meanwhile, Fury Road (137p) and Latest Exhibition (141) are two of the more interesting contenders from Ireland after winning graded events on their most recent starts. The latter stayed on strongly to beat subsequent Grade 2 winner Andy Dufresne at Navan last time and looks sure to relish this longer distance, while Fury Road was value for extra when extending his winning sequence to three at Limerick over Christmas (in control when blundering at the last).