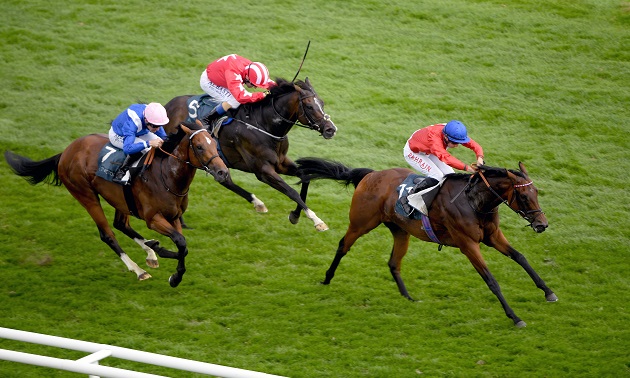 The Thoroughbred Industry Employee Awards Challenge Stakes (15:00) at Newmarket on Friday is available as a free Race Pass, which means logged-in customers can view all our premium comments and ratings.

Eight runners are set to go to post for Friday's Thoroughbred Industry Employee Awards Challenge Stakes (15:00) at Newmarket, a Group 2 run over seven furlongs for horses aged three and above.

The William Haggas-trained Sacred (127) tops the field on Timeform's weight-adjusted ratings having returned to form with an emphatic victory in a listed race at Newbury three weeks ago. She had a standout chance at the weights and duly capitalised on the drop in grade in the manner of a filly right at the top of her game, easing clear in the final furlong to land the spoils by six and a half lengths. This has been the target since and another big run seems assured in her follow-up bid for Haggas, who has the 'Hot Trainer' Flag to denote that his yard is in top form.

Haggas also saddles the three-year-old Purplepay (118), who has a 3 lb penalty to carry having won at this level in the Prix de Sandringham at Chantilly in June. She is clearly a smart filly on her day, but this demands more against older rivals and she wasn't at her best when last seen finishing only fifth in the Kilboy Estate Stakes at the Curragh in July. This is also the shortest trip she has run over since early in her two-year-old season.

The main danger to Sacred is likely to be Pogo (125), who made the breakthrough in Group company earlier this season with wins in the John of Gaunt Stakes at Haydock and Criterion Stakes on the July Course. He proved at least as good as ever when filling the runner-up spot in the City of York Stakes last time, passing the post just a length and a quarter behind the subsequent Group 1 winner Kinross and having the disappointing Sacred down the field behind him in sixth.

Sacred is likely to prove a different proposition today, but there is no reason why Pogo shouldn't give another good account at a track which lends itself well to his style of racing. Indeed, he has the 'Horse For Course' Flag following a series of good efforts on the Rowley Mile during his career, including when chasing home Happy Power in this race two years ago.

Jumby (122) had Pogo behind him when winning the Hungerford Stakes at Newbury in August, but he needs to bounce back having finished down the field in both starts since. Similar comments apply to Misty Grey (121), who followed a good effort in the Supreme Stakes at Goodwood (beaten just a head into second) with a disappointing display in the Park Stakes at Doncaster (beaten five lengths into fourth).

That just leaves Umm Kulthum (121), who proved her stamina for this trip when beaten just a neck in the Sceptre Stakes at Doncaster last time, and Oscula (119) and Internationalangel (120), who were separated by just a head when they met in the Oak Tree Stakes at Goodwood in July.

A tough and consistent filly, Oscula has continued to run well in the interim for George Boughey – who also has the 'Hot Trainer' Flag – including when registering her second Group 3 success in the Prix de Lieurey at Deauville in August. However, she might struggle to uphold the form this time with Internationalangel, who is 5 lb better off at the weights and ran another sound race when last seen filling the runner-up spot in the Prix Quincey at Deauville.

Sacred got firmly back on track when routing 6 rivals in listed company at Newbury 3 weeks ago and is very much the one to beat. Pogo is rock solid at this trip so he seems sure to go well again, with Internationalangel perhaps the pick of those at longer odds.