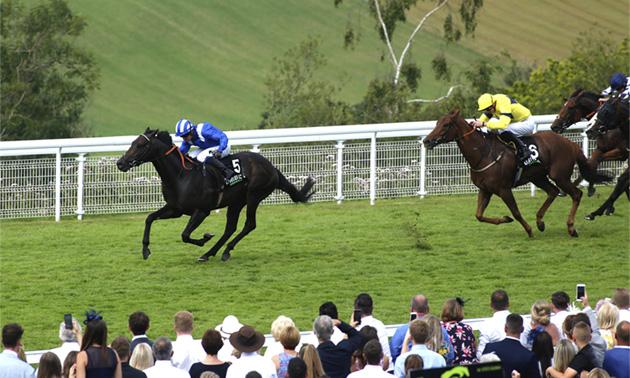 The Cathedral Stakes at Salisbury on Sunday is available as a free Race Pass, which means you can view all our premium comments and ratings.

The feature race on Sunday’s card at Salisbury is the Cathedral Stakes, a listed race over six furlongs for horses aged three and older.

The leading contender according to Timeform’s weight-adjusted ratings is Khaadem (124), who should find these conditions more suitable than when well held on heavy going at Haydock last time. That was his second below-par effort in succession after also struggling on his reappearance at Meydan, but he is clearly a smart sprinter on his day, as he showed on his only two starts last season, finishing fourth in both the Diamond Jubilee Stakes at Royal Ascot and July Cup at Newmarket. He should be closer to that form now back on faster ground with a couple of runs under his belt, so this looks a good opportunity for him to resume winning ways before stepping back up in grade.

Mums Tipple (122) is fancied to emerge as the chief threat after rediscovering his best form on the all-weather earlier this year, notably winning a seven-furlong listed race at Wolverhampton in March. He ran at least as well in defeat when second in a similar event back on turf at Leicester last time, keeping going well to be beaten just a length and a quarter behind Pogo, who was getting 3 lb. Once again, Mums Tipple must concede at least 3 lb to each of his five rivals here, but he clearly arrives in a rich vein of form and is unlikely to be inconvenienced by the drop back to six furlongs. Richard Hannon also has the ‘Hot Trainer’ Flag to denote that his yard is in rude health as he seeks a third success in this listed heat since 2014.

The other older horse in the line-up is Shine So Bright (119), who looks held by Mums Tipple on these terms given that he was beaten nine lengths when last of four in that listed contest at Leicester. He showed he still retains a smart level of ability when going down only narrowly from a BHA mark of 100 in a handicap at Lingfield in March, but his record has been rather hit-and-miss since recording his last win in the Group 2 City of York Stakes back in August 2019. The balance of his form suggests he simply isn’t the force of old.

The pick of the three-year-olds in the line-up could be Cairn Gorm (109), who completed a hat-trick on his first three starts last season, culminating with a win in the Group 3 Prix de Cabourg at Deauville. He struggled when stepped up in grade subsequently but should be more at home at this level on his first start after eight months on the sidelines. He acts well on good to firm going and three-year-olds have a good record in this race of late (four winners since 2013), so it will be interesting to see how he measures up under champion jockey Oisin Murphy, who can boast an excellent 21% strike rate at Salisbury in recent seasons.

The field is completed by Chocoya (114) and Line of Departure (108). Line of Departure was a useful two-year-old in 2020 and could have more to offer as a half-brother to the Commonwealth Cup winner Golden Horde, while Chocoya has race fitness on her side and has already taken her form up another notch this season. She will be suited by the return to six furlongs after failing to get home in a seven-furlong listed race at Musselburgh last time, while the form of Hugo Palmer, who also has the ‘Hot Trainer’ Flag, gives cause for further optimism.

KHAADEM has some smart form to his name, and whilst he's run well below form on his last two runs, he could be excused both. Returning to a sounder surface with a run under his belt, he should be too good for this field. Mums Tipple is very good on his day though and he should make a race of it. Cairn Gorm also isn't out of it if he can find his best form on his favoured surface.

Just click here to view the full card and Timeform analysis for the Cathedral Stakes at Salisbury on Sunday. You can subscribe to Race Passes to access every race here.