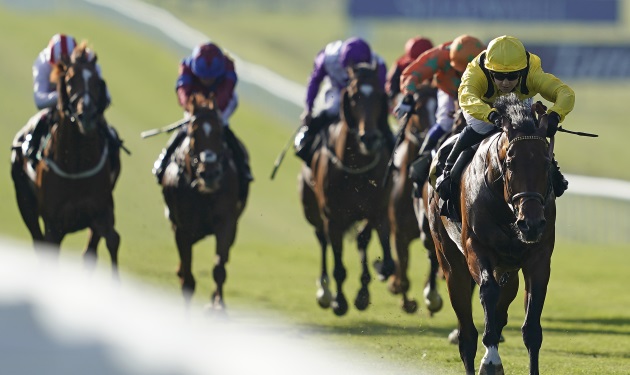 Andrew Asquith previews the Ayr Gold Cup on Saturday and fancies one at a double-figure price to bounce back to form.

The Ayr Gold Cup is one of the most competitive sprint handicaps in the racing calendar, and this year’s renewal looks no different, with bookmakers currently going 10/1 the field in the ante-post books.

At the head of the betting, the market is struggling to separate Mr Lupton, Nahaarr and Danzeno, who are all priced similarly. The first-named confirmed the promise of his eye-catching run in the St Wilfrid at Ripon when winning a valuable 22-runner handicap at the Curragh on Sunday with something to spare. He proved at least as good as ever to record his first win since May 2019 – which came in a Group 2 over the same course and distance – and there was plenty to like about his performance, for all the low-drawn numbers did have something of an advantage on the day. Mr Lupton was well beaten in this race 12 months ago, but that came from a 7 lb higher mark, and there is plenty to like about his chances under a 5 lb penalty.

Mr Lupton is back!

The William Haggas-trained Nahaarr has a more unexposed profile to the majority of these, successful in four of his five starts last season, and looking a future pattern-class performer when resuming winning ways in a handicap at Newbury in July. He was sent off a well-backed 3/1 favourite in the Stewards’ Cup at Goodwood 13 days later and, for all he wasn’t disgraced, he was unable to justify strong support, lacking his usual flair and zip. The quick turnaround, and the unique track at Goodwood are possible excuses, and he is worth another chance to prove himself ahead of his mark.

The now nine-year-old Danzeno is holding his form incredibly well this season, again finishing placed when runner-up in the Portland Handicap at Doncaster on Saturday. He was strong in the betting that day with top apprentice Ray Dawson in the plate, and Danzeno ran a cracker behind Stone of Destiny, pulling clear of the remainder but finding the well-handicapped winner too strong in the closing stages.  A repeat of that performance will see Danzeno bang in the mix again if turned out quickly here.

Stone of Destiny had fallen 4 lb below his last winning mark, and found the intermediate trip of the Portland and the big field bringing out the best in him, looking as good as ever to record just his second win for the yard. His performance was impressive on the day, tanking along in the rear before being asked to challenge a furlong from home, displaying a notable turn of foot to assert from the remainder in the closing stages. It is worth noting that he is the type of horse who needs everything to fall right, and the circumstances don’t always allow him to showcase that sort of performance. Nonetheless, he is well treated under a 5 lb penalty, and will be a danger to all if in the same form.

Trainer Andrew Balding also has another interesting type towards the head of the betting in the shape of King’s Lynn. The form of his win in a valuable sales race at Doncaster on his final start last season worked out well, and he shaped well when runner-up to the very progressive Starman on his return back on Town Moor last month. That was his first start for 11 months, and he lacked the sharpness of the winner, who has since proven himself a very smart performer when winning again in a listed event at York. King’s Lynn travelled as well as any that day, and he should be very competitive from an opening mark of 94, provided he gets in the race.

Brando carried top-weight to success in this race in 2016 and Summerghand will have to concede at least 8 lb to all of his rivals if he is to emulate him. He put up a mighty effort to defy top weight in the Stewards’ Cup at Goodwood last month, belatedly landing the big handicap his record so deserved, having missed out by a nose in the Wokingham at Royal Ascot earlier in the year. He was beaten only a neck in listed company on his next start, and wasn’t disgraced in the Sprint Cup at Haydock last time, just ultimately finding the step into Group 1 company too competitive. Summerghand’s style of racing lends itself well to these big-field handicaps and it would be folly to ignore his chances.

Air Raid is another worth mentioning after returning to form when last seen at Hamilton in July. He was very progressive in handicaps last season, winning three times, and his third-place finish at Hamilton last time suggests he has more to offer. That form looks solid enough, and this prominent runner isn’t without a chance, though his claims would be strengthened if there was cut in the ground.

In summary, this is a typically difficult puzzle to solve, and it could be worth giving another chance to Nahaarr, who didn’t give his proper running at Goodwood last time. The switch back to a more conventional track will suit this strong-travelling type, and based on his Newbury win, he is more than capable of defying this mark when conditions allow it. If King’s Lynn gets a run (needs several to come out) then he will undoubtedly be a danger making his handicap debut.

Back Nahaarr in the Ayr Gold Cup on Saturday