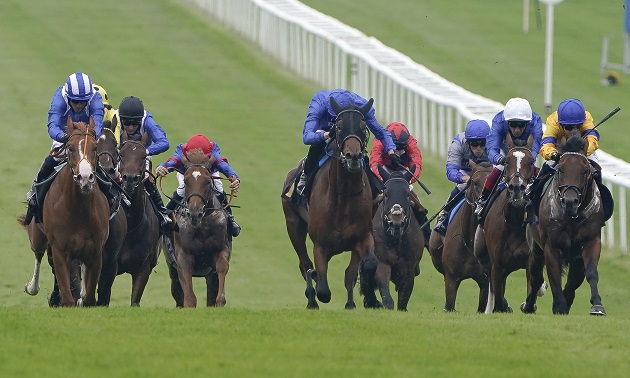 Timeform provide a tip for each of the eight meetings taking place in Britain and Ireland on Saturday.

This doesn’t look a strong edition of the Sweet Solera Stakes and Novakai arrives with the most compelling claims. She wasn’t strong in the betting, and got worked up beforehand (unseating her rider), but did nothing wrong in the race itself, always travelling well and displaying a sharp turn of foot to settle matters from two furlongs out when making a winning debut at Doncaster. There should be any amount of improvement in her now for a yard that has a good crop of juveniles and she brings lots of potential to the table.

This looks a cracking renewal of the Phoenix Stakes and the Archie Watson-trained Bradsell is expected to uphold Coventry form with Persian Force and Blackbeard. Both of those rivals have come out and won in pattern company since and Bradsell looked in a different league at Royal Ascot, the turn of foot he showed to shoot clear two furlongs from home proving the difference.  He is strongly fancied to prove himself one of the best juveniles around now by landing this prestegious Group 1.

Hamaki is very much bred to excel over middle distances and he beat another progressive three-year-old with a bit in hand in a moderately-run race at Haydock last time, proving very strong at the finish. That points to more progress now he is stepping up even further in trip and his run style suggests he is the type to stay ahead of the handicapper for some time. A 5 lb rise in the weights is more than workable and it will be a surprise if there isn't even more to come, especially now moving up even further in trip.

Whitebeam has contested each of her three starts at Newbury so far, building on the promise of her debut to win the last two, and she remains a horse to be positive about now moving into handicaps. She didn't need to improve to defy a penalty last time, but she left the impression she was only doing what was required once hitting the front, and she is the type who will pull out more when the circumstances allow. That was over a mile, but the drop back to seven furlongs isn't a concern, and an opening mark of 91 seems fair.

Glory And Honour was well backed on handicap debut after being allotted a lenient mark based on his hurdles form, but he wasn't seen to best effect in a slowly-run race. He proved up to the task at Catterick and Thirsk the last twice, though, where he has been seen to better effect in more truly-run races. Both of those were over a mile and a half, but he will have no problem returning to this longer trip on that evidence, and he will remain of interested turned out quickly under a double penalty.

Ford Madox Brown is yet to win for this yard, but he arrives in good form having only narrowly been touched off the last twice, and he has been left on the same mark for both of those efforts. He attempted to make all the running last time and was only caught one the line by a well-backed rival, but the pair pulled a little clear of the remainder, and he may be harder to catch at this venue where his record reads well (1283). He is drawn well and Marco Ghiani knows him well, so another bold bid is expected.

Chief Seattle showed improved form to open his account over hurdles at Ballinrobe last month and he ran well returned to fences when third at Roscommon last time without being seen to best effect. He was given too much to do on that occasion, still having plenty of ground to make up early in the straight but staying on well. This should be run at a stronger gallop and he can prove himself on a good mark.

Water of Leith has returned to form since rejoining Jim Goldie, finishing runner-up over course and distance earlier this month, and going one place better to end a losing run dropped to the minimum trip also at this track last time. He impressed with the manner in which he travelled through the contest that day, having no problem with the drop in trip, and well on top inside the final furlong. Water of Leith is wisely turned out under a penalty and he remains well treated on the pick of his form, so there is plenty to like about his chances.