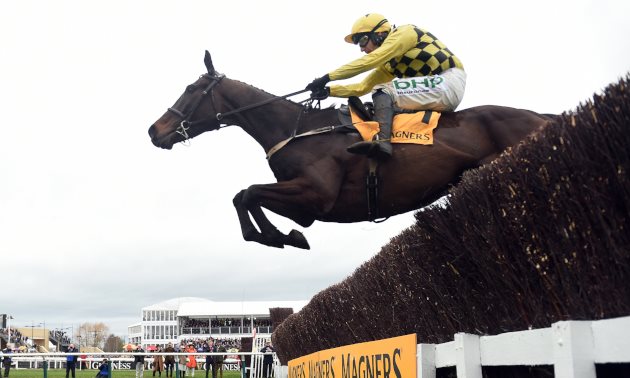 Adam Houghton puts Al Boum Photo under the spotlight ahead of the 2020 Cheltenham Festival and considers his prospects of winning the Gold Cup for the second year in succession.

Al Boum Photo ran out a decisive winner of last year’s Cheltenham Gold Cup to provide trainer Willie Mullins – who had previously saddled the runner-up on six occasions – with his first win in the race.

Admittedly, several of the market principals failed to meet expectations that day, but it was still the performance of a top-class chaser, and, with less than four weeks to go now until the big day, Al Boum Photo is currently as short as 7/2 to defend his crown. Can he become the first back-to-back winner of the blue riband since Best Mate?

The case for Al Boum Photo

In a career over fences spanning only 10 races, Al Boum Photo has quickly proven himself to be a chaser out of the very top drawer, one who has yet to finish out of the first two on the seven occasions he has completed. The eight-year-old remains relatively unexposed so far as staying trips are concerned, too, with only four of his starts in this sphere having come at three miles or further.

He certainly relished the increased emphasis on stamina when landing last year’s Gold Cup, staying on strongly over a trip two furlongs further than he had ever faced before to win by two and a half lengths. There has been the odd exception over the years, but you typically need deep reserves of stamina to win a Gold Cup, and it’s good to know that there are no concerns on that front for Al Boum Photo, unlike market rivals such as Clan des Obeaux and Kemboy.

The defending champion will also arrive at the Festival fresher than most after an identical preparation to last season, making just the one appearance in a Grade 3 event at Tramore on New Year’s Day. He looked on excellent terms with himself, too, giving 11 lb and a six-length beating to the 153-rated Acapella Bourgeois.

The case against Al Boum Photo

Al Boum Photo may appear to have plenty in his favour as he bids to repeat his 2019 success, but the same could also be said of many other returning heroes over the years, and yet Best Mate remains the only horse since L’Escargot in 1970/71 to land back-to-back renewals.

It is clearly no easy task and there have been better horses than Al Boum Photo to have tried it, with the likes of Kauto Star (who did eventually regain his crown, of course), Denman and Long Run all coming up short in this century alone. Three of the four Gold Cup winners before Al Boum Photo didn’t even make it back to Cheltenham, which just goes to show how difficult it is keep these staying chasers operating at such a high level.

It’s also worth pointing out that this year’s renewal looks likely to be a deeper Gold Cup than the one Willie Mullins’ charge won last season, when a performance rating of 167 proved good enough to land the spoils. Admittedly, Al Boum Photo himself is capable of better than that – he ran to 171 when second behind Kemboy (173) in last season’s Punchestown Gold Cup – but so too are six other horses in the potential line-up at Cheltenham.

With just 5 lb covering that septet on Timeform’s weight-adjusted ratings, much could depend on other factors on the day such as luck-in-running and jumping – a department that Al Boum Photo hasn’t always convinced in during his chasing career (fell twice as a novice and still tended to make the odd mistake last term).

Jockey Paul Townend (after Al Boum Photo’s Tramore win): “It's brilliant to have him back and he couldn't have done it any better.

“He's not always as clever as that, but I got into a good rhythm on him early and hopefully he can go on to bigger and better things again this year.

“It worked last year, and hopefully it will work this year.”

It clearly won’t be easy for Al Boum Photo to retain his Gold Cup crown, but one thing in his favour is his preparation, which has been all about giving him the best chance of doing just that. His season has revolved around one day and there was certainly plenty of encouragement to be taken from his Tramore win, when he dispatched inferior opposition with the minimum of fuss.

Admittedly, it wasn’t a vintage Gold Cup he won in 2019, but he still ranks behind only Kemboy – who has been operating below his best so far this season – on our weight-adjusted ratings for this year’s renewal, and he is unlikely to give up his title without a fight.