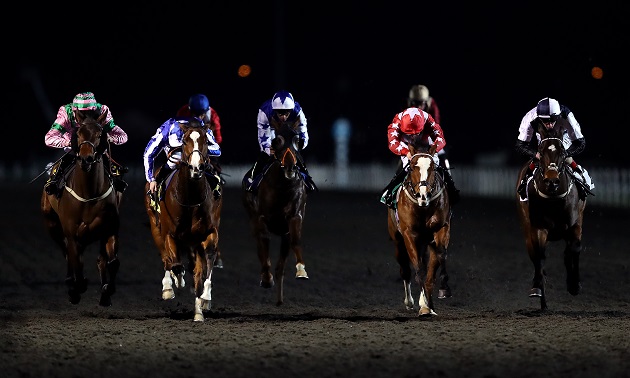 The 20:00 at Kempton on Wednesday is available as a free Race Pass, which means logged-in customers can view all our premium comments and ratings.

There's £80,000 in prize-money up for grabs in the London Stayers' Series Final (20:00) at Kempton on Wednesday night and it's unsurprisingly a competitive affair with a maximum field of 14 declared.

Timeform's weight-adjusted ratings are narrowly headed by Bascule (110) based on the form he showed at Chelmsford last December when getting up close home to complete a four-timer on the all-weather.

He wasn't quite at that level on his return to a synthetic surface over this course and distance last month, but he ran creditably to be beaten a neck in second by Juan Bermudez and he is 1 lb better off with that rival here. Blinkers replace cheekpieces here.

The lightly-raced Juan Bermudez (104) showed an excellent attitude to fend off Bascule here last month, but he enjoyed the run of the race on that occasion, setting a steady tempo, and it will be harder to dominate in a field of this size.

Another who arrives on the back of a win over course and distance is Duty of Care (108). That was his first attempt at the trip and he relished it, putting up a career-best effort to score by three and a half lengths, proving strong in the finish and earning the Horse In Focus Flag. He has a 5 lb penalty to carry for that success last week, but he was well on top at the finish and remains completely unexposed over staying trips. He was chased home last week by Motazzen (106+), Sashenka (105) and Pons Aelius (104) in that order.

Two that are prominent on Timeform's weight-adjusted ratings are Imperium (109) and Withhold (109+) - they are both trained by Harry and Roger Charlton and contested a course-and-distance handicap won by Rainbow Dreamer in which Island Brave (106) and Bandinelli (107) also competed.

Withhold was fourth on that occasion but he shaped better than he had been doing on turf and he wouldn't have been suited by the modest tempo. He's not done much racing on the all-weather since landing the Northumberland Plate in 2018 and has slipped to a fair mark.

Imperium was a place behind Withhold at Kempton and he too left the impression that he would have benefitted from a stronger gallop. He's entitled to have come on for that first run since April so could be sharper here.

The winner of that race, Rainbow Dreamer (105+), was better placed than most in that steadily-run contest and has a 3 lb rise in the weights to deal with in a more competitive event here. He was a smart performer at his best, though, and has a fine record over course and distance so another bold showing cannot be ruled out.

Several to consider in this competitive handicap, with Duty Of Care the most appealing of them. He relished the step up to this trip when striking over C&D last week, beating 3 of these rivals in the process, and it's likely that he has more to offer as a stayer. Bascule was touched off by Juan Bermudez here last time but Richard Hughes's charge is taken to turn the tables this time. He is second choice ahead of stablemates Withhold and Imperium, while Rainbow Dreamer also enters calculations.