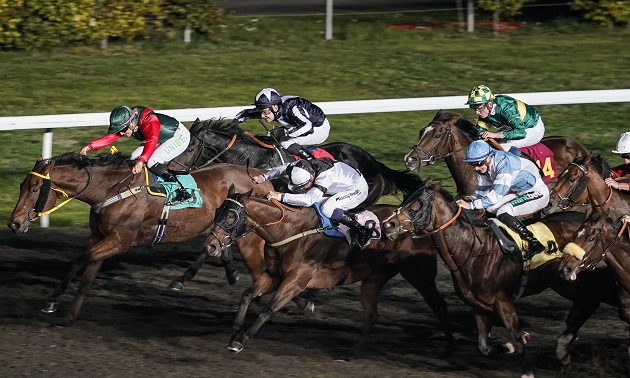 The 19:30 at Kempton on Wednesday is available as a free Race Pass, which means logged-in customers can view all our premium comments and ratings.

Eight runners are set to go to post for the ebfstallions.com Conditions Stakes (19:30), the most valuable contest on Wednesday's evening card at Kempton with nearly £13,000 on offer to the winner.

Mutafawwig (122) tops the field on Timeform's weight-adjusted ratings. He achieved a smart level of form when filling the runner-up spot in a similar event at Meydan in March, keeping on well to pass the post just a length and three-quarters behind stable companion Storm Damage. Admittedly, he failed to match that effort when last seen finishing down the field in the Al Quoz Sprint at the same venue, but it will be no surprise to see him bounce back on his return from six months on the sidelines. Still low mileage for a six-year-old, Mutafawwig is trained by Saeed bin Suroor, who has the 'Hot Trainer' Flag to denote that his yard is in top form.

First Folio (121) is likely to emerge as the chief threat for James Ferguson, who also has the 'Hot Trainer' Flag. First Folio proved better than ever as he resumed winning ways in a handicap at Yarmouth last time, only winning by a length but looking value for a bit extra having drifted left well inside the final furlong. That was a smart effort to defy a BHA mark of 97 and a repeat of that form will give him a good chance of following up on these terms.

The Ed Bethell-trained Regional (121) had First Folio down the field behind him when finishing third in the Stewards' Cup at Goodwood in July, doing well to be beaten just a length and a half having come from further back than the others to make the frame. He proved a disappointment in another competitive handicap at York last time, but that was a rare below-par effort and he is the type to bounce back quickly.

Shine So Bright (120) is the highest-rated horse in the field, but he has work to do on these terms given that he must concede at least 4 lb all round. It was good to see him back to his best with a couple of handicap wins at Newmarket in the spring, but he then spent four months on the sidelines before returning to action with an underwhelming display in a listed race at Newbury last time, passing the post seven lengths behind the winner in third. This will be just his fourth start on the all-weather and he needs the return to this surface to spark a revival.

Shine So Bright is trained by Andrew Balding who, like Saaeed bin Suroor and James Ferguson, has the 'Hot Trainer' Flag to highlight that his team is in rude health. That comment also applies to Charlie Hills, who saddles Royal Commando (114), a useful sprinter on his day. However, he hasn't been seen in competitive action since finishing last of the three runners in a similar event at Salisbury in July, leaving him with a bit to prove on his first start on the all-weather.

Acklam Express (119+) is another all-weather debutant who arrives here on a losing run stretching back to August 2020. He clearly has the ability to win a race of this nature when everything falls right, though, as he showed when finishing third (beaten four and a half lengths) in the King's Stand Stakes at Royal Ascot in June.

The field is completed by the useful handicappers Willem Twee (116) and Ayr Harbour (115). The progressive three-year-old Willem Twee completed a hat-trick over this course and distance in August and is not one to write off despite failing to meet market expectations at Ascot last time, whereas Ayr Harbour is fairly exposed at this stage and simply doesn't look up to this level.

Plenty in with a shout and it may just pay to side with the returning Mutafawwig. A very lightly raced 6-y-o, he displayed smart form in defeat at Meydan earlier in the year, and with a low-mileage AW profile to call upon, it would come as no surprise to see him go well. First Folio and Regional head up the dangers.