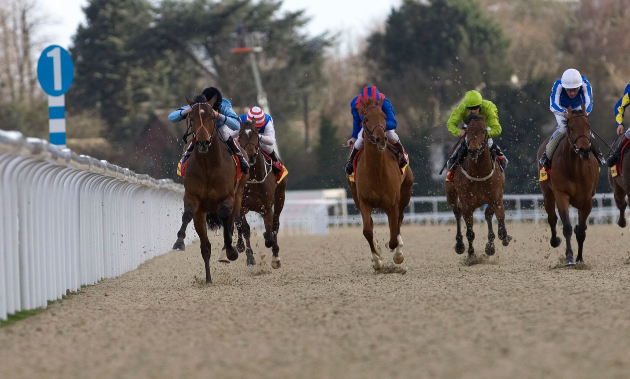 The 19:15 at Kempton on Monday is available as a free Race Pass, which means you can view all our premium comments and ratings.

The best contest on Kempton’s evening card is the fillies’ handicap over seven furlongs (19:15) in which none of the six runners can be safely ruled out. Heading the weights is the only four-year-old in the line-up Cry Havoc (102) who is also top on Timeform weight-adjusted ratings.

Raced mainly on all-weather tracks, Rae Guest’s filly was a course winner at two and won twice at Chelmsford last season, including a class 2 handicap. She can be forgiven her final run last year when a mile proved a bit too far for her in a listed contest at Kempton and, having won after an absence before, she’s respected on her first start since last November.

Divine Magic (95) shouldn’t be far away either for ‘Hot trainer’ Marco Botti. She got off the mark in a handicap at Leicester in May before being beaten at shortish odds on her next three starts but returned to winning ways at Sandown last time in a race which set up nicely for her from off the pace after the leaders probably got racing a bit too far out.

Michael Bell is another trainer with the ‘Hot trainer’ flag. His runner Great Vibes (93) hasn’t run for a year but looks interesting on her stable debut. She was highly tried on her final start at two for George Scott in the May Hill Stakes but prior to that had beaten some useful fillies who have performed well since in listed company in a nursery at Newmarket. There could be more to come from her for her new yard.

Roger Charlton is also a ‘Hot trainer’ at present and is represented by the Juddmonte filly Beheld (98). The daughter of Frankel made a winning debut at Newbury last season and probably has a better performance in her, but she’s been beaten at short odds in all four outings this season and, in another small field, her tendency to race too freely could be a worry again.

St Leger-winning jockey William Buick takes the ride on Flame of Freedom (96) for Eve Johnson Houghton. The partnership was successful over this trip at Epsom last time but Flame of Freedom came off a strong pace to lead on the post there and gives the impression further will suit her ideally.

The field is completed by Sealed Offer (98) whose first start on joining Kevin Philippart de Foy late last year was a winning one at Lingfield. Lightly raced this term, she ran her best race since when a keeping-on third over the same course and distance last time when a stronger pace would have helped her.

Great Vibes had some now useful sorts behind her when winning a Newmarket nursery last summer. She hasn't been seen since finishing well held in the May Hill a year ago but is interesting on her return for a new yard which could easily get more out of her. Cry Havoc has won after an absence before and has a good all-weather record so she's feared most ahead of recent Sandown scorer Divine Magic.

Just click here to view the full card and Timeform analysis for the 19:15 at Kempton on Monday. You can subscribe to Race Passes to access every race here.