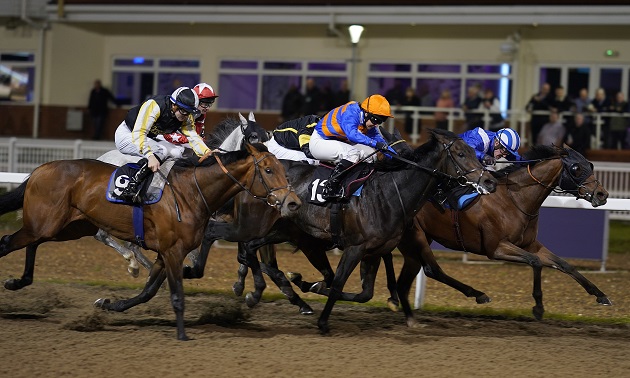 The 19:00 at Chelmsford on Thursday is available as a free Race Pass, which means logged-in customers can view all our premium comments and ratings.

Only five have been declared, with Timeform's weight-adjusted ratings narrowly headed by Intuitive (114). He showed smart form on the all-weather on occasions last winter, notably when landing a conditions event at Lingfield in November on his first start for nearly eight months. His form proved patchy after that, but he did run to a similar level when runner-up in a couple of handicaps at Lingfield, including on his penultimate start in March when he was beaten just a neck off this mark. He was disappointing when last seen at Kempton in April, but he has a good record when fresh and is on a fair mark so cannot be ruled out. Connections have elected to swap his usual visor for first-time cheekpieces.

Excel Power (113) also needs to bounce back from a disappointing effort last time, but it's easy enough to forgive him for his latest effort at Wolverhampton as an awkward start from a poor draw meant he was unable to adopt his customary prominent position. He had proved better than ever when winning at Lingfield on his penultimate start, albeit in a race where he was well positioned and abe to quicken away at just the right time in a steadily-run race. Even so, a 4 lb rise in the weights for that victory leaves him on a fair mark, and it's worth noting he has run well on two of his three previous starts at this venue.

Baldomero (112) is another who wasn't at his best on his latest start at Kempton in September, failing to quicken when asked, but he ran well on his penultimate start at the same venue when runner-up in the valuable London Mile Series Final. He found only an unexposed rival too strong on that occasion and has a generally solid profile on the all-weather.

Darwell Lion (112) makes his first start for John Butler having previously been with David O'Meara. He won two of his four starts for O'Meara after joining from Ellmarie Holden, and was a comfortable winner of a Lingfield handicap when last seen in January. He received an astute ride from Jason Watson on that occasion, making a decisive move around three furlongs out, but he was well on top at the finish and a deserved winner. He reappears for his new yard off an 8 lb higher mark in a better race, but was going the right way for his former yard and may not have reached his limit. He has been gelded since last seen.

The field is completed by likely pace-setter Azano (106+) who took a step back in the right direction at Lingfield last time, for all he finished last again. He at least showed up well for a long way, offering some encouragement of a return to form, but others hold stronger claims.

Excel Power couldn't land a blow after an awkward start at Wolverhampton last week and is taken to resume winning ways. Darwell Lion is feared most.