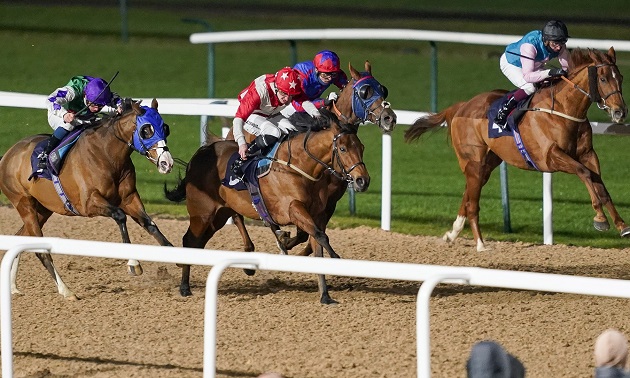 The 18:50 at Southwell on Tuesday is available as a free Race Pass, which means you can view all our premium comments and ratings.

The most valuable event on Southwell’s twilight card is the seven-furlong handicap at 18:50. The 0-95 contest brings together seven runners with just 9 lb between top and bottom weights. In fact, it’s the pair at each end of the handicap who look the most interesting.

Topping the Timeform weight-adjusted ratings is Tadleel (111) who looks on a good mark for Richard Fahey at the foot of the weights. He won a couple of races on the tapeta at Newcastle early last year before going on to contest some of the top handicaps at this trip on turf over the summer, including when fifth in the Bunbury Cup at Newmarket. Now back below his last winning mark, he signalled a return to form back at Newcastle when placed on his last two starts last year and was beaten only a head by thriving rival Spartan Fighter in the second of them.

All five of Mohareb's (106) wins have come on the all-weather and the latest of those, which came at this course last week, has earned him a 5 lb penalty here. He found plenty to account for Temple Bruer by a length and a half, and while that was over six furlongs, he’s just as effective over this slightly longer trip.

Lord Neidin (108) is worth a look on his first start for Stuart Williams. Sold out of Alan King’s stable for 10,000 guineas last autumn, he raced mainly over a mile for his former yard and won at Pontefract last June. He’s fitted with a tongue tie for the first time and has his first run since October when underperforming over a mile and a quarter.

Eagleway (108) began last season for Ivan Furtado by finishing second in a typically competitive Victoria Cup at Ascot and ended the year in good heart too with placed efforts over a mile at Southwell and Kempton though was unsuited by the way the race developed when third of five to Animal Instinct at the latter track. He wears cheekpieces again as he did for those last two runs.

On A Session (109) is by no means handicapped out things but has gone a long while since his last win in Ireland in 2019. Now with David Barron, he was down the field in both the Victoria Cup and Bunbury Cup but showed useful form when making the frame on several other occasions last year. He finished in front of Eagleway when a close fourth in a good race at Musselburgh in October and can be excused his final start last year at Wolverhampton.

Soundslikethunder (101) is the least exposed of these after just five races and is another who starts the year with a new stable after joining Sam England from Richard Hannon’s for 13,500 guineas. He won a novice at Doncaster last March but has been off since finishing fourth in a handicap at Nottingham in July and still looks a little high in the weights.

The field is completed by Chief Little Hawk (104) who won a couple of times as a two-year-old for Aidan O’Brien in 2020. He started at long odds in all three of his runs in handicaps for Jamie Osborne last summer and is another who needs a bit of respite from the handicapper.

Tadleel is lurking on a dangerous mark and he showed his turn can't be far away when just touched off at Newcastle last month. He looks the one to side with here. Mohareb did it well over six furlongs here last time and has to be feared under a penalty. Lord Neidin is also worth a look on his first start for Stuart Williams.

Just click here to view the full card and Timeform analysis for the 18:50 at Southwell on Tuesday. You can subscribe to Race Passes to access every race here.