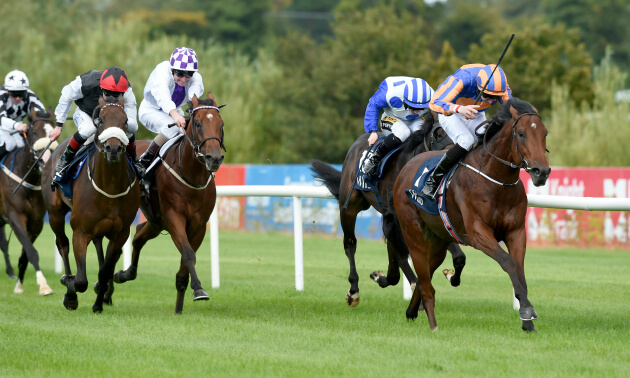 The Ballyroan Stakes (18:15) at Leopardstown on Thursday is available as a free Race Pass, which means logged-in customers can view all our premium comments and ratings.

There's Pattern-race action on Thursday evening as Leopardstown stages the Group 3 Ballyroan Stakes (18:15). Narrowly heading Timeform's weight-adjusted ratings for the mile-and-a-half contest is the progressive Cleveland (119p), who makes his first start for Joseph O'Brien having previously been with Aidan O'Brien.

Cleveland, an impressive winner of a maiden on his final start at two, failed to make it to the course last season but he shaped with promise when fifth in a ten-furlong listed race on his belated return at Naas in March and built on that to win the Chester Cup over a mile further.

The Chester Cup runner-up Coltrane franked the form by winning the Ascot Stakes but later on that Royal Ascot card Cleveland had to settle for second behind the thriving Get Shirty in the Copper Horse Handicap. Cleveland was unsuited by the tactical nature of the race in that mile-and-three-quarter contest and, with that in mind, shaped with plenty of encouragement, earning the Horse In Focus Flag.

This further drop in distance is the obvious concern, but Cleveland's form is strong (Get Shirty subsequently won the Old Newton Cup) and he is going the right way, so he looks the one to beat.

The other runner in the line-up who earned the Horse In Focus Flag last time, identifying him as one to be interested in, is the lightly-raced Beamish (115p).

Beamish has won all three starts and did well to score by half a length in a listed race at Roscommon last time as he had to make up a fair amount of ground on the runner-up who briefly slipped clear early in the straight. Beamish, like Cleveland, has the 'p' attached to his rating to indicate that further improvement is likely.

The only penalised runner in the line-up is Layfayette (115) who carried an extra 5 lb for his Group 2 success in the Mooresbridge Stakes at the Curragh in May. That smooth success, achieved with more in hand than the winning margin of three-quarters of a length would suggest, completed a hat-trick for Layfayette, who has proved better than ever this season.

His winning run came to a halt in the Hardwicke Stakes at Royal Ascot, but the fast ground can be put forward as a plausible excuse and he appeals as the type to quickly bounce back to form, for all his penalty makes things tricky.

Dermot Weld won this race last year with Tarnawa and has two representatives this time around with Falcon Eight (118) and Duke de Sessa (113). Falcon Eight, who failed to fire over hurdles at the Galway Festival last week, is usually campaigned over much further than this but is a smart type on his day, as he showed when winning the Chester Cup last year.

Another smart type who features prominently on Timeform's weight-adjusted ratings is Gear Up (117), now a stablemate of Cleveland. Gear Up capitalised on a drop in grade to land a conditions stakes at Gowran Park in June and he proved as good as ever when runner-up in the Curragh Cup last time, even though he did enjoy the run of the race from the front.

The field is completed by Licence (113), Manu Et Corde (113) and Sandhurst (110?) who all need to improve, though Licence has only had three starts so could yet do better.

Cleveland maintained his progressive profile when second at Royal Ascot and he makes obvious appeal back in Group company on his first start for Joseph O'Brien. Beamish is an obvious danger and Layfayette is likely to bounce back quickly from a lesser effort.