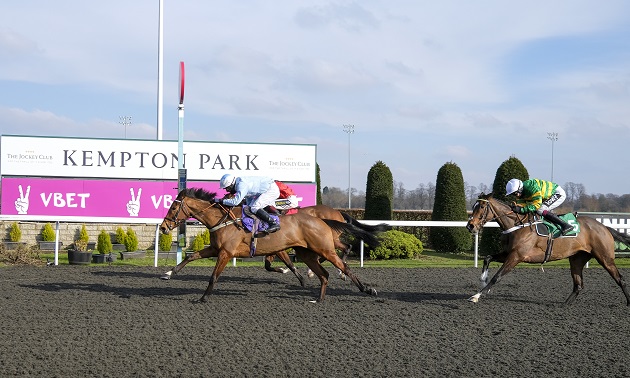 The 17:30 at Kempton on Wednesday is available as a free Race Pass, which means you can view all our premium comments and ratings.

The highlight on Kempton’s card is the Wild Flower Stakes, a listed contest over a mile and a half at 17:30, with eight declared to run.

Most of these are older horses whose abilities are pretty well established but Godolphin three-year-old Siskany (Timeform weight-adjusted rating: 127p) has a different profile, coming here at the end of a year when he’s not only shown almost constant progress but also better form than any of his rivals. He’s proven on this surface, too, having got off the mark at Kempton on his final start last year, and has developed into a very smart performer for Charlie Appleby this season, winning a novice at Windsor and a handicap at Sandown earlier in the season.

After a couple of good runs in defeat at Royal Ascot and Goodwood, after which he was gelded, Siskany ran his best race yet when carrying top weight to victory in the valuable Old Rowley Cup at Newmarket in October, finding plenty to run out the winner by two and a quarter lengths from Farhan who went on to win the November Handicap at Doncaster. Siskany was odds on to make a successful transition to Group company in the St Simon Stakes at Newbury a couple of weeks later but almost certainly found that race coming too soon, while the heavy ground probably didn’t help either. All in all, it’s easy to forgive that run and he looks well up to resuming his progress here.

Among Siskany’s smart older rivals is Alignak (118) who will be having his first start for Jamie Osborne. He’s another with winning form on Kempton’s polytrack and won a listed race at Chester on his final start last season. However, he has been well below his best in two starts this term after 12 months off the track and was tailed off in heavy ground in the Cumberland Lodge Stakes at Ascot last time. Sold from Sir Michael Stoute’s stable for 82,000 guineas since that run, Alignak has place claims if reviving for his new yard.

Fox Tal (120$) is another with the form to pick up place money if in the right mood and comes from the in-form yard of Andrew Balding who has the ‘Hot trainer’ flag. The ungenuine Fox Tal isn’t a betting proposition for win purposes, though, for all that he ran well over this course and distance when a close third behind Hamish and Hukum in the September Stakes. The hood is back on here after his usual headgear was left off last time.

Fourth in the September Stakes was Outbox (120) who has to give weight away all round after his listed success against the former St Leger winner Logician at Newmarket in June. He hasn’t been in quite the same form in recent starts, including when sixth in another listed race over this course and distance a month ago. Irish mare Tartlette (115) finished just in front of Outbox when fourth in that contest and while she has a good record at home on the polytrack at Dundalk, she’s likely to need a career-best effort to make more of an impact back here.

James Tate’s filly Garden Paradise (112) steps up markedly in grade after winning two of her last three starts in handicaps, and while she won with plenty in hand at Wolverhampton last week after five months off, she faces much better rivals here, as well as a drop back in trip. The two others in the line-up, Aced It (106) and Pretty Sweet (105), are two more handicappers in form, though both have been beaten in recent starts from BHA marks in the 80s – Pretty Sweet was turned over at very short odds at Wolverhampton on Monday – so they look very much up against it at this level.

Siskany is undoubtedly the class act and will be hard to beat if back to anything like the sort of form that saw him take apart a useful field at Newmarket in October. He won here last year so the surface won't be an issue and is the type to rate even higher. Alignak could be interesting if reviving for his new yard, while the frustrating Fox Tal must have place claims at least again.

Just click here to view the full card and Timeform analysis for the 17:30 at Kempton on Wednesday. You can subscribe to Race Passes to access every race here.