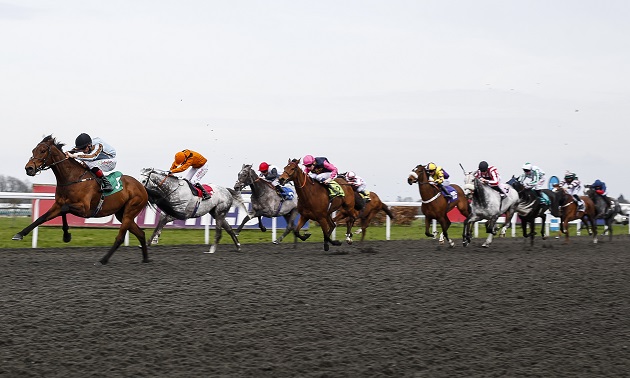 The British Stallion Studs EBF Hyde Stakes (17:15) at Kempton on Monday is available as a free Race Pass, which means logged-in customers can view all our premium comments and ratings.

The British Stallion Studs EBF Hyde Stakes (17:15) is the feature event on Monday's nine-race card at Kempton, a one-mile listed heat for horses aged three and above.

The three-year-old Dhabab (125+) tops the field on Timeform's weight-adjusted ratings. He returned from over a year off the track (gelded and had a breathing operation in the interim) with an impressive victory on his handicap debut at Lingfield last month, proving better than ever as he finished strongly from mid-division to get the verdict by a neck. He is back up in grade today, but that was borderline very smart form he showed at Lingfield and just a repeat of that effort might be good enough for him to follow up.

The main danger is likely to be Cash (122p), who shaped well amidst greenness when last seen filling the runner-up spot in the Classic Trial at Sandown in April, doing his best work late on to pass the post just a short head behind the subsequent Irish Derby winner Westover. That is clearly smart form and Cash has the 'Sectional' Flag which highlights just how strongly he finished his race. He also has the 'Horse In Focus' Flag to underline that he remains one to be positive about and there should certainly be more to come from him, though it won't necessarily be today as he drops back in trip after seven months off.

Tinker Toy (118) is another to consider having produced a career best when last seen winning at this level at Wolverhampton in March, hitting the front a furlong out and keeping going well from there to land the spoils by three quarters of a length. That was a smart performance and it didn't come entirely out of the blue from one with his impeccable breeding (by War Front and out of the Moyglare Stud Stakes winner Cursory Glance). He is still low mileage for a five-year-old and should go well again if fully wound up after eight months off.

The field is completed by The Wizard of Eye (113) and Ranes (107). The Wizard of Eye has been highly tried all year and needs the application of first-time cheekpieces to spark some improvement for him to have any chance of ending his losing run, while Ranes also arrives here with plenty to find on her debut for Rae Guest having shown just fairly useful form when trained in France by Pascal Bary.

Lots to like about the top three in the betting here, with preference for Dhabab. The Gosdens' gelding made the frame on a couple of occasions at two and returned from a lay-off with an impresssive victory at Lingfield last time. Cash, last seen chasing Westover home, is an exciting prospect for middle distances, whilst Tinker Toy was a rapid improver last winter.