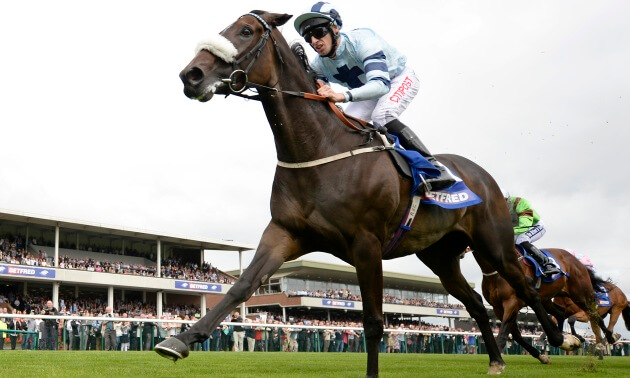 The 17:15 at Haydock on Sunday is available as a free Race Pass, which means logged-in customers can view all our premium comments and ratings.

Haydock hosts the next round in the Sky Bet Sunday Series with some competitive class 4 handicaps, including the mile and a quarter contest at 17:15 with a field of twelve.

Ed Bethell’s unexposed three-year-old Rich King (99) heads the Timeform weight-adjusted ratings thanks to a course-and-distance win in May which has worked out particularly well. He made smooth headway from off the pace to beat Tamilla by a short head, the pair finishing clear of the rest, with the runner-up one of no fewer than four among the beaten horses to win next time out. Rich King had excuses when fourth at Southwell last time returning from a ten-week break, shaping a bit better than the distance beaten suggests, and still looks on a good mark.

Ed Walker’s American Flag (97p) looks interesting making his handicap debut after just three starts and has been gelded since the last of them. He started off in the Wood Ditton at Newmarket and ran his best race stepped up to a mile and a quarter last time when two and a quarter lengths third to odds-on favourite Asaassi, a useful winner since, in a maiden at Salisbury. American Flag shaped as though in need of a stronger pace than he got there and he remains open to improvement.

Miramichi (98) represents ‘Hot Trainer’ Tom Dascombe and he also has the ‘Horses For Courses’ flag having gained two of his four wins last year over course and distance. He’s yet to win this season but has been in good form this summer with a string of place efforts, and while he wasn’t at his best last time when second of four at Newmarket, he came up against a smart and progressive three-year-old in Francesco Clemente there.

Award Dancer (93) completes the short-list having won both his starts since joining Grant Tuer from Joseph O’Brien last season. He got off the mark in a handicap at Newcastle last autumn and made a successful turf debut after eight months off when a ready winner at Musselburgh in June, earning the ‘Horse In Focus’ flag. Award Dancer kept on well for both those wins over a mile so should prove as effective over this trip.

Bottom weight Forgivable (95) is going the right way for Tim Easterby as he showed when getting off the mark upped to a mile and a quarter at Redcar last time, making the running and holding on gamely with Bringitonboris (93) back in fourth. The latter, in a change of headgear (cheekpieces instead of visor), makes less appeal for Keith Dalgleish, being of more interest over a shorter trip on the all-weather. Easterby’s other runner Jewel Maker (96) is another better at shorter, though is in good heart at present, having won at Carlisle last month and is turned out quickly after going down by a head at Pontefract on Wednesday.

Richard Fahey’s runner Solar Joe (92) is a lightly-raced four-year-old and another who’s been running well lately, coming off a strong gallop to get off the mark at Pontefract in July and running creditably at Hamilton last time when runner-up to Jean Baptiste who got a well-judged ride from the front.

Charlie & Mark Johnston’s Luminous Light (95) should find this less competitive than the hot three-year-old handicap he contested at Goodwood last week and the drop back in trip should suit this front runner too. He’s still looking for a first win since a successful debut last season, however.

Anythingtoday (95) carries top weight and is now back with his former trainer Roger Fell who has the ‘Hot Trainer’ flag. He’s been with George Boughey for the last year or so and won his first two races for that yard last summer whilst also shaping well on occasions this term.

Lady Caroline (88) won a novice at Chester last season for Tom Dascombe but hasn’t shown much in a couple of handicaps for Hugo Palmer this season, while Sucellus (92§) for Oliver Greenall and Josh Guerriero is one to treat with caution. His last three wins have all come at Haydock, the last of those in June, but they’ve all been at shorter trips and he ran poorly last time.

An intriguing handicap with the vote in favour of Rich King. Off the mark in a course-and-distance handicap that has worked out well, Ed Bethell's three-year-old had excuses on his latest outing at Southwell and he gets the nod to confirm his present mark is still a workable one. American Flag's form in maiden/novice events is also working out well and he's of interest on the back of being gelded. Miramichi and the hat-trick seeking Award Dancer complete the shortlist.