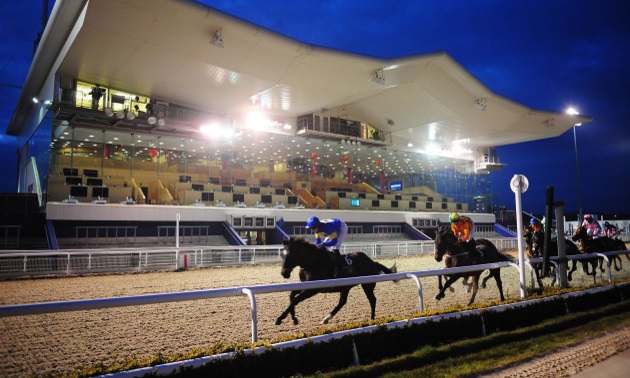 The 16:40 at Dundalk on Monday is available as a free Race Pass, which means logged-in customers can view all our premium comments and ratings.

The Irish Stallion Farms European Breeders Fund 'Red God' Premier Handicap (16:40) is the most valuable race at Dundalk on Monday with a purse of €50,000 and as you would expect it has a competitive feel to it.

It is Juyush (107), whose last win came over at mile at this course in December 2020, who tops Timeform weight-adjusted ratings. All three of his wins since moving over from France have come over the same course and distance, so he is worth a second look now returned to this venue for the first time since. Juyush wasn't at his best on his latest start at Naas two weeks ago, but he ran well on his previous start, and this longer trip is worth exploring.

One of the most interesting runners in the field is Saraqael (100p), who is by far the least exposed after just three starts, and arrives after producing a career-best effort to open his account at Galway last month.

His previous form also reads well, finishing third in an above-average maiden the time before, and there was plenty to like about the manner of his victory last time. Saraqael travelled with purpose and his jockey had to hold fire when becoming short of room two furlongs out, but the turn of foot he displayed once in the clear was impressive. He was readily on top at the line and appeals as the type who will win more races now handicapping, still open to more improvement as the 'p' attached to his rating suggests. Very interesting despite a wide draw.

However, three-time course and distance winner Bowerman (106) will be a big challenger from this sort of mark. His last win in a handicap came from 10 lb higher and he has a good record on an artificial surface - his record at this course now stands at four wins from eight starts. Bowerman has been contesting stronger races than this for the most part of his career and he should get a good pace to aim at here like the Timeform pace map suggests (strong). He is well drawn and it would be no surprise if he bounced back to form returned to this venue.

Ger Lyons won this race with Ides of August (103) 12 months ago and he is expected to launch another bold bid. He is yet to trouble the judge in a handful of starts on turf so far this season, but he has been keeping better company than this, and it is interesting that he now goes in first-time blinkers. Ides of August is now 5 lb lower in the weights than he was in this race last year and it would be folly to ignore his claims back on the all-weather, especially for a yard that continue in fine form, highlighted by the Hot Trainer Flag.

Top-weight Isle of Sark (103) is a lightly-raced four-year-old who may show more now returned to the all-weather. He made a winning debut at this course over seven furlongs as a juvenile and has finished third and second on his other two starts at this track. The latest of those came when beaten a nose by Bowerman over course and distance in February. Isle of Sark is 3 lb worse off at the weights now, but arguably has more potential, and can't be ruled out.

Joseph O'Brien is also represented by Dances With Stars (101), who has recorded all three of his career wins over a mile and a half at this course. He has run respectably on turf on his last three outings, the latest coming in listed company, so he should find this easier provided he copes with this drop back in trip.

Another to consider is Snag It (100), who recorded his first win on these shores over nine furlongs at Tipperary 10 days ago. That was a career-best performance on just his fifth start for this yard, well positioned given how the race panned out but was still readily on top at the finish. He should launch another bold bid back on the all-weather.

Saraqael has improved with each of his three starts, most recently landing a big-field Galway maiden in ready fashion, and there could be more to come from this unexposed 3-y-o now upped in trip for this handicap debut. He earns the vote ahead of Bowerman, who has been operating below his best in recent months but is now 5 lb lower than when scoring over C&D in February and is 7-15 on the all-weather.