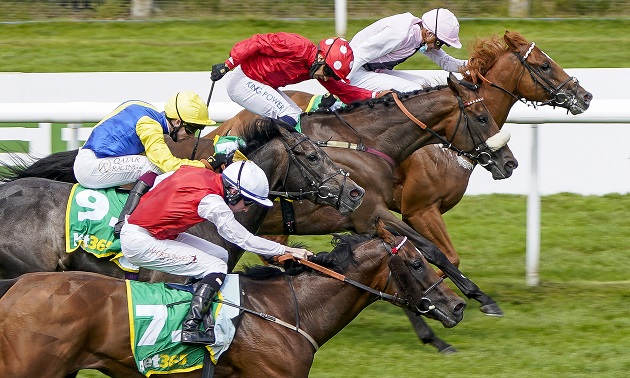 The 15:45 at Newmarket on Thursday is available as a free Race Pass, which means logged-in customers can view all our premium comments and ratings.

The most valuable event at Newmarket on Thursday is the seven-furlong handicap (15:45), which has prize-money of £25,000 up for grabs. Timeform's weight-adjusted ratings for the six-runner event are headed by Dream Show (107), a lightly-raced three-year-old who shared the spoils at Newbury last time.

Not much went right for Dream Show on his handicap debut and reappearance at Goodwood - he was hampered at the start and then raced freely - but he was a different proposition at Newbury last time. Dream Show settled better after being allowed to bowl along up with the pace and he dug deep under pressure, earning a share of the spoils with another progressive rival.

That three-year-old handicap should prove to be solid form, so a 5 lb rise in the weights looks lenient, especially as ace apprentice Harry Davies is able to claim 5 lb to offset the burden.

The other three-year-old in the line-up is Deodar (103p), an unexposed sort who still has the Timeform 'small p' attached to his rating to indicate further improvement is likely.

Deodar made a successful start at Newbury in September, getting the better of a useful sort in a six-furlong maiden, and he produced an even better effort in defeat when runner-up in Listed company at Doncaster, finding only Flaming Rib (subsequently finished placed in Group 1 company) too strong.

Deodar didn't need to show anything like his best form to comfortably justify 1/12 favouritism in a six-furlong novice at Doncaster on his return in May and he now goes handicapping and steps up in trip with the scope to do better.

The three-year-olds look to have the edge in this handicap, but the best of the older brigade could be Lord Rapscallion (104). He is on a long losing run that stretches back to August 2020, so will be vulnerable against the progressive three-year-olds, but he has been given a chance by the handicapper and turned in his best effort of the season when runner-up at Epsom last time.

Cliffs Of Capri (106) is another on a long losing run that stretches back to 2020 - in his case February of that year - but he has also been given a chance by the handicapper and is 1 lb below his last winning mark. Cliffs Of Capri was a good seventh in the ultra-competitive Bunbury Cup last year on his only outing at this track, shaping better than the result would suggest after leading home his group, and he finished runner-up on his only outing on the Rowley Mile. He has the Horses For Courses Flag to highlight his effectiveness here.

Dream Show cranked his form up a notch when dead-heating in a solid-looking 3-y-o handicap at Newbury 3 weeks ago and a 5 lb rise looks pretty lenient. He can follow up, perhaps at the chief expense of Deodar and Lord Rapscallion.