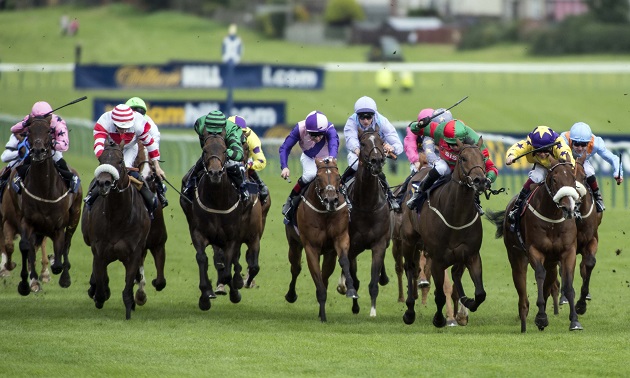 The Ayr Gold Cup (15:40) on Saturday is available as a free Race Pass, which means you can view all our premium comments and ratings.

The Timeform weight-adjusted ratings for the 2021 running of the Ayr Gold Cup (15:40) are headed by a couple of Horses In Focus running under a penalty.

Just Frank (123) and Great Ambassador (122p) both impressed Timeform's analysts with the style of their recent victories. Just Frank had run a number of solid races in defeat over seven furlongs this season, but he benefited from the return to six furlongs at Thirsk last month, putting up a career-best effort on the figures as he made all to win by two and a quarter lengths, never looking like being reeled back. That was a smart performance, backed up by a decent time, and he is clearly still on a competitive mark.

Great Ambassador has already gone close in a fiercely competitive handicap this season, shaping well when third in the Stewards' Cup. He was arguably unlucky not to win at Goodwood as he was disadvantaged by racing in the smaller group towards the far side, and he backed up that positive impression by bolting up at Newmarket on his next outing. That stylish victory earned Great Ambassador a shot at listed company at York two weeks ago and he made no mistake, taking another step forward to win by a length and a half. He has thrived since joining Ed Walker and may not have finished improving yet.

The other Horse In Focus is Ostilio (121+), who caught the eye when fourth in the Beverley Bullet last month, shaping like a sprinter about to take advantage of a falling mark. He has yet to fully fire since joining Paul Midgley, but his effort at Beverley was certainly a step in the right direction and he is well handicapped based on the form he showed for Simon & Ed Crisford. Ostilio finished powerfully over five furlongs at Beverley and the step back up in trip is in the favour of a horse who has won at up to a mile.

There are three runners with the Horses For Courses Flag, highlighting their effectiveness at this venue. Those runners are Bielsa (121), Mr Wagyu (121) and Snazzy Jazzy (113).

Arguably the most interesting of that trio is Bielsa. Like Great Ambassador, he wasn't well drawn in the Stewards' Cup and he shaped better than the result in sixth after cutting out his own running down the centre of the course. There may have been a few hard-luck stories in behind in the Stewards' Cup, but Commanche Falls still deserves credit for his fourth win of the season. He is on an upward curve and, in the care of Michael Dods, is with a yard that excels with such types.

Paul Midgley has few peers in the sprinting sphere and his Ostilio, who really caught the eye when a fast-finishing fourth in the Beverley Bullet, is taken to capitalise on a very handy mark now he reverts to 6f. Great Ambassador arrives on a hat-trick and is feared most under a 5 lb penalty, with Stewards' Cup hero Commanche Falls and resurgent Thirsk scorer Just Frank also firmly in the picture.

Just click here to view the full card and Timeform analysis for the 15:40 at Ayr on Saturday. You can subscribe to Race Passes to access every race here.