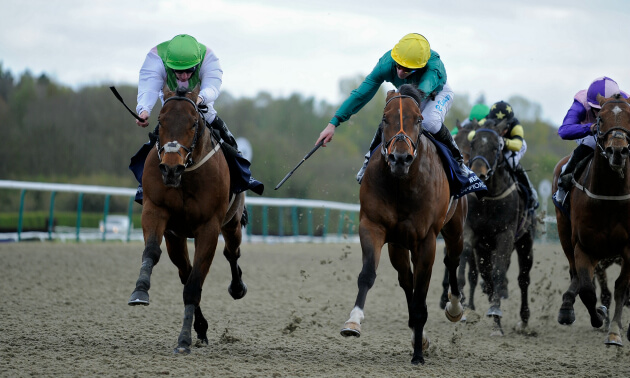 The 15:25 at Newcastle on Tuesday is available as a free Race Pass, which means you can view all our premium comments and ratings.

Five runners are set to go to post for this conditions event (15:25), the most valuable race on Tuesday’s card at Newcastle and a Fast-Track Qualifier for the three-year-old contest on All-Weather Finals Day next April.

The William Haggas-trained Canonized (113) sets the standard on Timeform’s weight-adjusted ratings, a tough filly who has achieved a useful level of form during a busy two-year-old campaign. She has won four races and ran right up to her best when successful in a listed event at York earlier this month, overcoming a troubled passage to win comfortably by three quarters of a length.

Canonized deserves credit for holding her form so well and she is seemingly versatile with regard to conditions (won on good to firm and soft going), so the switch to tapeta is unlikely to be an issue. She looks sure to give another good account for Haggas, who has an impressive 30% strike rate at Newcastle since the start of the 2017 season.

Sam Maximus (112) is likely to emerge as the chief threat. He has shown up well in pattern company since making a winning debut at Haydock in May, producing his best effort when third, beaten just a neck behind Lusail, in the July Stakes at Newmarket. He was below form when fifth in the Round Tower Stakes at the Curragh last time, but this represents a significant drop in grade. He too makes his tapeta debut and there is no doubt he has the ability to give Canonized plenty to think about.

The least exposed horse in the line-up is Space Cowboy (102p), who left his debut form well behind when getting off the mark in a maiden at Wolverhampton last month, making all to win by two and a half lengths in decisive fashion. He remains open to more improvement and it will be interesting to see what he can do up against a couple of rivals who have already shown useful form.

The small but select field is completed by Eldrickjones (107) and Taj Alriyadh (98). Eldrickjones has had his limitations exposed since finishing second in a substandard edition of the Coventry Stakes at Royal Ascot in June, finally getting off the mark against inferior rivals at Pontefract in September but then failing to make the most of another good opportunity at Nottingham last time.

Taj Alriyadh lines up for Karl Burke, who has won this race twice since 2017 and also has the 'Hot Trainer' Flag to denote that his yard is in rude health. Taj Alriyadh won his first three starts but lost his unbeaten record quite tamely when down the field in a listed race at Ripon last time. Even his best form leaves him with plenty to find, particularly as he must concede at least 3 lb to each of his four rivals.

Assuming that they both take to this surface, Sam Maximus and Canonized are likely to emerge as the chief protagonists. The latter is a thoroughly likeable filly and she is greatly respected on the back of her York listed success, but Sam Maximus boasts a couple of pieces of solid Group-race form and he is marginally preferred. The unexposed Space Cowboy is best of the rest.

Just click here to view the full card and Timeform analysis for the 15:25 at Newcastle on Tuesday. You can subscribe to Race Passes to access every race here.