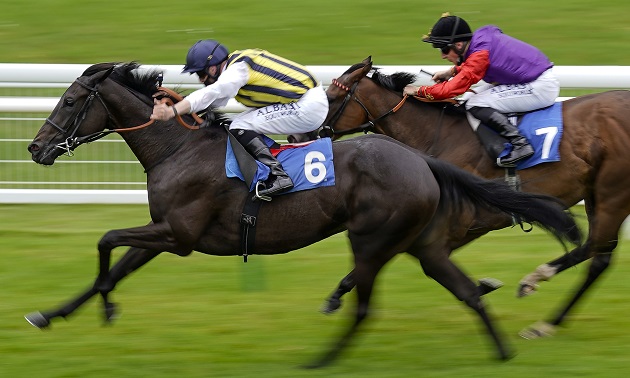 The 15:10 at Leicester on Tuesday is available as a free Race Pass, which means logged-in customers can view all our premium comments and ratings.

Nine runners are set to go to post for this 10-furlong handicap (15:10), the most valuable contest on Tuesday's eight-race card at Leicester with a total prize fund of around £15,000.

Just Fine (106) tops the field on Timeform's weight-adjusted ratings as he seeks a first win of the season. He ran respectably when last seen finishing sixth in a competitive handicap at Doncaster's St Leger Festival, just lacking a change of gear late on as he passed the post around four and a half lengths behind the winner. He is 2 lb lower in the weights today and this is the weakest race he has contested for a while, so it could be a good opportunity for him to get his head back in front for Sir Michael Stoute, who has the 'Hot Trainer' Flag to denote that his yard is in a rich vein of form.

Jean Baptiste (103) also features on a good mark and is the type to bounce back quickly from a below-par effort at Newcastle last time. He trailed in last of the 14 runners on that occasion, shaping as if amiss, but it's far too soon to be writing him off. After all, he's otherwise been a model of consistency since his reappearance this season and the manner of his victory at Hamilton in July suggests a BHA mark of 85 is far from insurmountable.

Kenzai Warrior (102) has been struggling for form recently and looks vulnerable despite being eased slightly in grade from a falling mark, while Matchless (102) was last seen finishing fifth in the Newcastle handicap in which Jean Baptiste flopped. He was beaten just a length and a half there and a repeat of that form will give him solid each-way claims once again.

Meanwhile, Noble Mark (101) looks the pick of the three three-year-olds in the line-up for Arc-winning trainer Sir Mark Prescott. He ran right up to his best after eight weeks off when filling the runner-up spot at Epsom last time, ultimately passing the post a length and a half behind the winner having raced freely at the head of affairs. He can line up from the same mark today and should be thereabouts once again if his rider can get him to settle over this longer trip.

The three-year-old challenge is completed by Mr Professor (100) and Sea The Casper (98). Mr Professor didn't appear to have any excuses when fourth (beaten two and three-quarter lengths) at Yarmouth last time and clearly needs more to defy this mark, while Sea The Casper showed signs of temperament when ninth (beaten six lengths) on his latest outing at Newbury. That wasn't a bad run in form terms, but the way he carried himself under pressure was a bit disconcerting, particularly for a horse who had looked potentiially smart in winning three of his four previous starts.

Sea The Casper is trained by Simon and Ed Crisford who, like Sir Michael Stoute, have the 'Hot Trainer' Flag to highlight that their team is going well. That comment also applies to Richard Spencer, who saddles The City's Phantom (98), a wide-margin winner on his seasonal reappearance at Yarmouth in April. Though below form in three subsequent starts, he clearly goes well when fresh and could bounce back now fitted with first-time cheekpieces after 10 weeks on the sidelines.

That just leaves Met Office (?), who is probably best watched under the circumstances. Formerly trained in France by Henri-Francois Devin, he will be making his British/handicap debut for John Butler and this is his first start of any kind since finishing down the field in a listed race at Deauville in October 2020.

This represents a good opportunity for Just Fine to belatedly get his head in front this season. He has been mixing it in stronger company than this and is now 6 lb lower than when finishing a highly creditable sixth of 22 in the valuable John Smith's Cup at York in July. Noble Mark arrives here on the back of a solid effort at Epsom and should be on the premises once again, while Jean Baptiste will be a danger to all if on-song and Matchless makes each-way appeal.