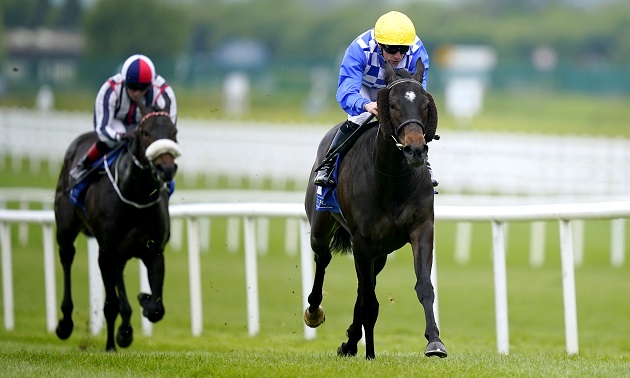 The Coolmore Stud Irish EBF Fillies Sprint Stakes (14:45) at Naas on Sunday is available as a free Race Pass, which means logged-in customers can view all our premium comments and ratings.

Seven runners are set to go to post for the Coolmore Stud Irish EBF Fillies Sprint Stakes (14:45), the most valuable contest on Sunday's card at Naas with over €40,000 on offer to the winner.

Matilda Picotte (106p) rates very much the one to beat according to Timeform's weight-adjusted ratings. She created an excellent impression when making a successful debut at the Curragh two weeks ago, blitzing them from the front to win by two lengths in dominant fashion. That was a borderline useful performance and she has the 'Sectional' Flag to highlight that she was just as impressive on the clock. She seems sure to go on to better things and this looks a good opportunity for her to maintain her unbeaten before a possible outing at Royal Ascot.

Comhra (96p) shaped encouragingly when chasing home Matilda Picotte at the Curragh and she didn't need to improve on that form to go one place better at Roscommon on Monday. That maiden was run over seven furlongs and she was well on top at the finish, winning by six and a half lengths with plenty in hand after quickening clear a furlong out. That performance earned her the 'Horse In Focus' Flag and she is sure to progress and win more races, though this trip is probably a bare minimum for her at this stage (will stay a mile).

Aidan O'Brien saddles Meditate (97p) as he seeks his fourth success in this Group 3 since 2016. Meditate showed a willing attitude when making a winning debut at the Curragh five weeks ago, finding plenty after being tackled over a furlong out to land the spoils by three and a quarter lengths. Admittedly, the form of that maiden doesn't look anything out of the ordinary, but she is likely to progress further and this contest has seemingly been her target for a while. O'Brien also has the 'Hot Trainer' Flag to denote that his yard is in top form.

Jessica Harrington is another trainer with a good record in this race following back-to-back wins in 2017 and 2018. This year she relies on It's Showtime Baby (92p), who was out earlier than most of these when making a successful debut at Dundalk at the beginning of April. Again, that wasn't the strongest race of its type, but she too is open to more improvement as she gains in experience.

The other three runners are all yet to win a race, though Treasure Trove (97) ran to a fairly useful level when finishing third in a listed heat at the Curragh two weeks ago. She was beaten less than two lengths on that occasion and a reproduction of that form would be good enough to win most maidens at this time of year. However, it goes without saying that this will be her tougher test yet on her third start for Paddy Twomey, who also has the 'Hot Trainer' Flag.

The field is completed by Comanche Country (95p) and La Dolce Vita (90p), who finished second and third, respectively, in a maiden over this course and distance three weeks ago. Both horses are open to more improvement after just one run, but similar comments apply to a couple of these who have already achieved more.

Matilda Picotte displayed cracking speed when getting off the mark at the first attempt in a Curragh maiden (6f) 2 weeks ago, drawing clear final 1f to win easily, and she gets the nod to back that up and make it 2-2. Aidan O'Brien's Mediate and Comhra are a couple of others fancied to figure.