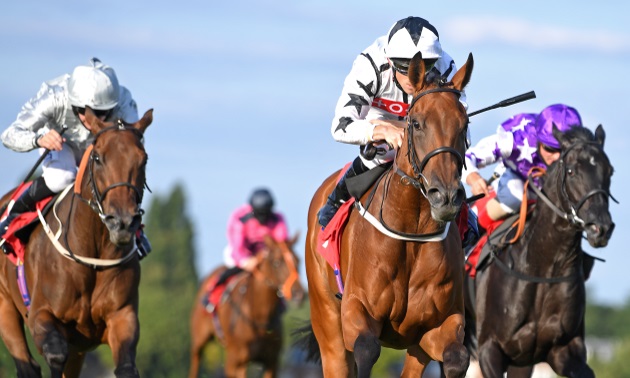 The Star Stakes (14:10) at Sandown on Thursday is available as a free Race Pass, which means you can view all our premium comments and ratings.

Nine two-year-old fillies are set to go to post for the listed Star Stakes (14:10), the feature event on Wednesday’s card at Sandown.

Inspiral (106P) sets the standard on Timeform’s weight-adjusted ratings after making a successful debut at Newmarket last month, an impressive performance which earned her the ‘Horse In Focus’ Flag to highlight that she is a filly to keep on the right side. Held up in the early stages after a slow start, she travelled strongly and made good headway two furlongs out before briefly running green. The most striking aspect of her performance was how well she picked up at the end of a steadily-run race, earning a huge sectional upgrade – and the ‘Sectional’ Flag – as she quickened to lead in the final 50 yards, ultimately winning by a length and a half with plenty in hand.

The large ‘P’ attached to Inspiral’s Timeform rating denotes that she is likely to make significant improvement with that run under her belt, so she is fancied to take the step up in grade here in her stride for John and Thady Gosden, who also have the ‘Hot Trainer’ Flag to underline that their yard is in rude health (87% of horses running to form).

Charlie Appleby, who also has the ‘Hot Trainer’ Flag, saddles the filly who is likely to emerge as the chief threat to Inspiral in the shape of Wild Beauty (105p). She opened her account at the second attempt at Haydock in May and then progressed further to follow up under a penalty at Newbury last month, keeping going well after hitting the front a furlong out to win by a length and a quarter. That form is working out well and Wild Beauty has certainly earned a crack at this level with the prospect of even better to come.

Allayaali (94p) appeals as the pick of the rest in a race full of potential improvers. Bought for €575,000 as a foal, she is certainly bred to be smart (by Dark Angel and a half-sister to the Irish 1000 Guineas winner Just The Judge) and the manner of her debut victory at Doncaster seven weeks ago suggests she possesses her fair share of ability. Admittedly, the bare form of that maiden is nothing flash, but she did well to win given where she came from, racing in mid-division before finishing strongly to run down an experienced rival who dictated just a modest gallop. She also earned the ‘Sectional’ Flag and looks sure to improve for the experience.

Inspiral created an excellent impression when a ready debut scorer in a Newmarket maiden last month and is fancied to take this step up in class in her stride. Charlie Appleby's hat-trick seeking Wild Beauty rates much the biggest threat to the Gosden's choicely-bred Frankel filly, with Doncaster debut winner Allayaali appealing as the pick of the remainder.

Just click here to view the full card and Timeform analysis for the 14:10 at Sandown on Thursday. You can subscribe to Race Passes to access every race here.