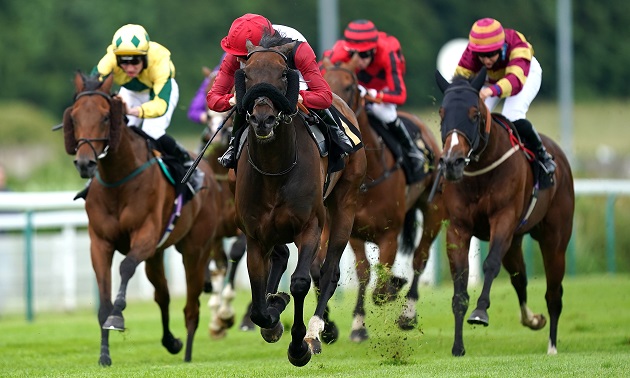 The 14:10 at Nottingham on Tuesday is available as a free Race Pass, which means logged-in customers can view all our premium comments and ratings.

There's a competitive card at Nottingham on Tuesday which features a Grassroots Sprint Series Qualifier at 14:10.

Timeform's weight-adjusted ratings for the six-furlong handicap are headed by the lightly raced King of Jungle (93), who looked unsuited by the drop to five furlongs at Thirsk last month and is better judged on his two previous efforts.

The speedily-bred King of Jungle overcame inexperience to make a successful debut at Kempton in February, impressing with how he asserted inside the final furlong. He was then only fourth under a penalty at Wolverhampton on his next outing, but he can have that effort marked up as he was trapped wider than ideal throughout, and it's worth noting that the form worked out nicely with the first two home both winning next time.

King of Jungle looked well treated based on that form but he failed to make an impact on his handicap debut at Thirsk. However, the drop in trip was an obvious excuse and he is worth another chance back at six furlongs having been gelded in the interim.

One stepping down in distance since last seen is topweight Aristobulus (87). He was a good third in a seven-furlong handicap at Goodwood in October, but we know he's effective at this trip as he bolted up over course and distance on his handicap debut in August, making a mockery of his opening mark. He remains relatively unexposed.

Another with good form at Nottingham is Helvetique (88) and her two runner-up efforts here have earned her the Horses For Courses Flag - that Flag highlights her effectiveness at this venue.

She largely proved consistent last term, one disappointing display at Goodwood aside, and was last seen finishing runner-up at Kempton in October off just a 1 lb lower mark, so she also enters the equation on her return.

Another Flag to note is the Jockey Uplift which was generated by the booking of William Buick on Dora Penny (92). She is well handicapped based on the pick of her form last season, though she has been underwhelming on two of her three outings this term.

Hooked On You (92) is another who needs to bounce back from a below-par display but could prove to be well handicapped if doing so. This half-sister to the very smart Alcohol Free made no impact on her handicap debut at Pontefract last time but had won a novice at the same course on her reappearance, running to a level that suggests a mark of 74 is fair. The good form of the Karl Burke yard is also in her favour.

Richard Hannon has also been among the winners of late and he is represented by Tyson (90), a winner of a Bath maiden when last seen in August. It took Tyson seven goes to get off the mark but he scored in stylish fashion at Bath and it's worth remembering that he had gone close off this mark at Ascot earlier in the summer. Timeform's reported noted last season that Tyson had scope, so it would be little surprise were he to progress at three.

King Of Jungle was unable to land a testing blow on his five-furlong Thirsk handicap debut last month but he ought to be seen to better effect back up at six furlongs and gets a tentative vote in this open three-year-old handicap. Reappearing trio Aristobulus, Helvetique and Tyson may give Ed Walker's charge most to do.