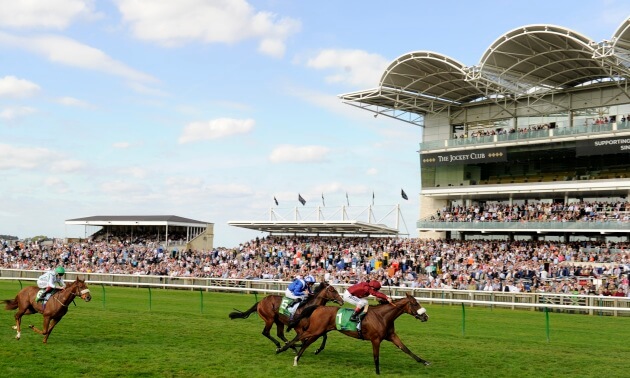 Timeform pick out three two-year-olds who caught the eye recently and ought to be winning races before the end of the season.

Green Team ran out a game winner of this novice event for Kevin Ryan, but his stablemate Marhaba The Champ was arguably the horse to take out of the race, showing a fair level of ability on debut with the promise of lots more to come. Waited with in the early stages, Marhaba The Champ made smooth headway three furlongs out and shaped well by the end after briefly running green under pressure, rallying inside the final furlong to pass the post less than two lengths behind the winner in fifth. His performance was particularly noteworthy given where he came from in relation to the four who beat him, faring best of those held up in a race where track position was key. By Galileo out of the very smart sprinter Lady of The Desert, Marhaba The Champ has a long way to go to live up to his illustrious pedigree, but there is no doubting his potential to progress and win races. He looks banker material for a similar event in the coming weeks.

This wasn’t a strong novice event for the track, at least in terms of current ability, but there should be more to come from several of them, the first two, in particular, appealing as ones to be excited about for next year. The winner Mellow Yellow had the benefit of a previous run and she put that experience to good use to get off the mark at the second attempt, while the runner-up Peripatetic also shaped with plenty of promise amidst clear signs of greenness. Peripatetic missed the break but recovered quickly to race in touch with the main body of the field. She made headway entering the final two furlongs and soon held every chance, but Mellow Yellow just proved the stronger on the uphill climb to the line, digging deep to get the verdict by a neck. The first two will both be suited by middle-distances in time and Peripatetic has a pedigree (by Ulysses out of a US Grade 1 winner over nine furlongs) which suggests she will go on improving well into her three-year-old campaign. Incidentally, Ulysses has already sired eight winners from his first crop of runners in Europe – including the promising debut winners Aeonian (96p) and New Dimension (85P) – and it’s surely only a matter of time before Peripatetic adds her name to that list.

Everyday beat only one rival home on his debut at Chelmsford at the beginning of the month, so it’s hardly surprising that he returned an SP of 50/1 when making his second start in a novice event at Newbury on Saturday. In the event, Everyday was never sighted with a winning chance at Newbury, always having too much to do in a race dominated from the front by the odds-on favourite, but he was still much improved from his debut in third, six and a half lengths behind the winner. The most impressive aspect of his performance was the amount of ground he made up in the final two furlongs, staying on well to be nearest at the finish. He remains open to more improvement, especially with a view to longer trips, and a quick switch to nurseries could also be on the cards before the end of the season. Whichever route he takes, he is unlikely to be 50/1 when he makes his next appearance on a racecourse, appealing as very much one to keep on the right side.