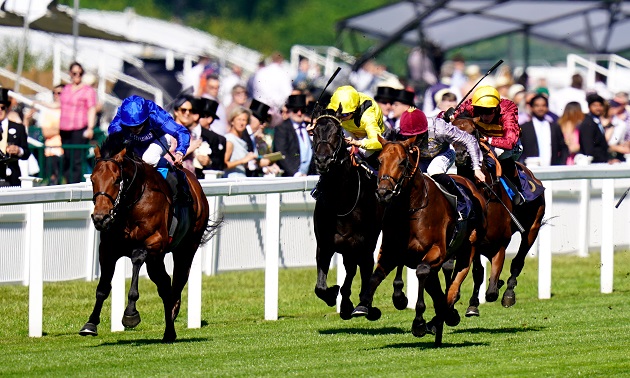 As can sometimes be the case on the round course over a mile at Ascot, luck in-running played a big part in the St James's Palace as the winner, Coroebus, got a break on the rail approaching the final furlong, while the eventual fourth, Maljoom, had to sit and suffer.

Once Maljoom found room he flew home and he was in front of Coroebus a couple of strides after the line, so he will have to go down as an unlucky loser.

He wasn't the sharpest away from the stalls – not for the first time – and as a result he was settled at the rear of the field but travelled through the race well and displayed a smart turn of foot when asked.

This was the first defeat of Maljoom's career and there is no doubt he is at least a very smart colt, one to keep on the right side moving forward, and, for all he doesn't hold an entry in the Sussex Stakes, a rematch with Coroebus somewhere down the line will be intriguing to see.

The draw often plays a factor in the Hunt Cup and it was the low to middle numbers which dominated the finish in this year's renewal, the winner Dark Shift catching the eye throughout and staying on determinedly to hold off the challenge of Intellogent.

The horse who caught the eye in the finish, however, was Sinjaari, who was drawn closest to the stands rail in stall 33 and raced towards the rear in the stands-side group for the majority of the race.

He was also noted travelling strongly, coming off the bridle later than the eventual winner under a very patient ride, but when he was asked for his effort, he finished strongly and easily put distance between himself and those who raced on his side.

Sinjaari has plenty of form over a mile and a quarter and judged on this effort he will be well suited by a step back up in trip, this performance under his big weight suggesting he will have no problem moving back into listed or Group 3 company.

This was a very deep renewal of the Britannia where the majority of runners congregated to the middle to far side and Saga did especially well to run the eventual winner to a neck.

Frankie Dettori tracked Thesis in the first half of the race, but when Ryan Moore pulled his mount out to make his challenge, Dettori was stuck behind horses and briefly had to take a pull.

However, once the gaps appeared, Saga skipped through his rivals making ground up all of the time, but once in the clear, the winner was fully in top gear.

Saga was closing all of the time but the line was always going to come first and he can go down as an unlucky loser. Saga has plenty of back form to make him of interest – he has finished runner-up to Modern Games, Coroebus and Maljoom – and he surely has a big pot in him when everything drops right.