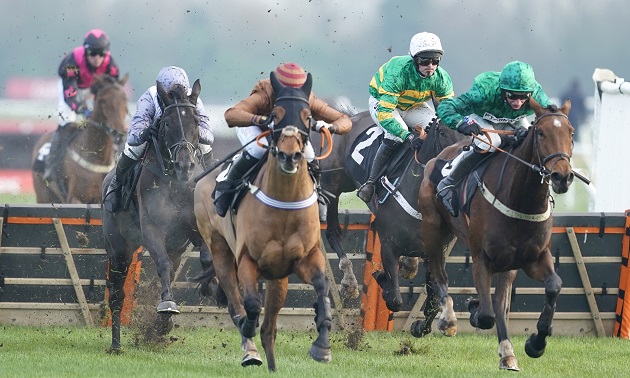 Timeform identify three jumps horses who made a big impression last week and could be worth following.

The bumper that My Drogo contested on debut at Cheltenham in October is usually the strongest race of its type to that point in the season, so it was encouraging that My Drogo featured so prominently, pulling seven lengths clear of the third without being able to overhaul a useful prospect. My Drogo quickly had his attention switched to jumping and he made the perfect start over hurdles at Newbury on Friday, scoring by a length and a quarter after travelling powerfully on the bridle and quickening when asked after the last.

That two-mile maiden hurdle is usually won by a useful prospect, with Buveur d’Air and Lostintranslation both on the recent roll of honour, and Dan Skelton’s charge really looks the part himself, a rangy gelding with plenty of room for improvement. He is sure to go on to better things and is certainly one worth keeping an eye on in the coming months.

MY DROGO picks up well under @harryskelton89 to land the opening maiden hurdle at @NewburyRacing for @DSkeltonRacing!pic.twitter.com/IarNJgyAhp

Zanahiyr was a fairly useful performer on the Flat, but he has more physical scope than the average recruit from that sphere and he has made an excellent start over hurdles. He scored at Ballinrobe in October on his first start for Gordon Elliott and then showed much-improved form on Sunday to win a Grade 3 juvenile at Fairyhouse by 14 lengths, producing the best performance in the division so far and shooting to the head of the betting for the Triumph Hurdle.

Zanahiyr’s performance is worth viewing positively given the runner-up, Saint Sam, had won twice in France and was strong in the market on his first start for Willie Mullins, and an excellent timefigure adds substance to the visual impression.

Gordon Elliott, who also trains Duffle Coat and Quilixios, has a very strong hand when it comes to juvenile hurdlers, but Zanahiyr may just be the pick of the bunch. He will reportedly have one more run in Ireland before heading to the Triumph Hurdle.

The @gelliott_racing-trained Zanahiyr is a very impressive winner of the (Grade 3) Juvenile Hurdle at @Fairyhouse, asserting after the last to pull clear from odds-on favourite Saint Sam!pic.twitter.com/0ZCRUh9xAd

Gowel Road hails from a good jumping family – his dam is an unraced half-sister to the top-class hurdler Mister Morose – and he made a promising start to his career at Ffos Las on Sunday, just bumping into a good prospect in Bear Ghylls whose experience shone through.

Gowel Road raced off the pace and, after making headway after four out, joined the leader with two flights to jump. His inexperience told late in the day on his debut, however, as he hung left on the run-in, allowing the short-priced favourite to get on top close home.

Gowel Road, who pulled eight and a half lengths clear of the third, is sure to have learned from the experience and he has the Timeform ‘p’ attached to his rating, indicating that he is likely to improve. His pedigree and debut effort suggests he’s one to follow.

Battling success - Bear Ghylls digs deep to double his tally over hurdles and remain unbeaten for Nicky Martin and @mattgr1ff1ths at @FfosLasRC pic.twitter.com/6wq5NVZd8u