My Timeform: Four horses who caught the eye at Leopardstown 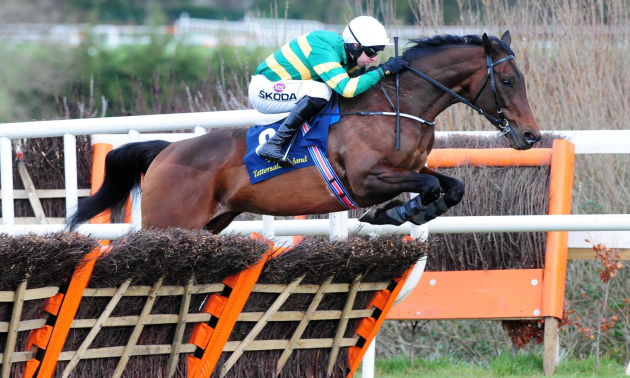 Timeform identify a horse who caught the eye from each of the four days of Leopardstown’s Christmas Festival.

A large field went to post for the four-year-old maiden bumper which concluded Leopardstown’s Boxing Day card and it’s a race that promises to throw up plenty of winners, with the first four home all representing top yards. The first two, Harry Alonzo and Top Bandit, had the benefit of a previous outing but the fast-finishing third, Collins, well-backed as the 5/2 favourite, was making his debut for Joseph O’Brien. He wasn’t seen to anything like best effect, either, having been caught much further back than ideal. Still nearer last than first entering the straight, he stayed on well, despite hanging left in the final furlong, to be nearest at the finish, five lengths behind the winner at the line. A €115,000 purchase, Collins is a son of the top French sire Martaline and out of a half-sister to the fairly useful jumper Yayo who stayed three miles, but he comes from a top Flat family that includes Montjeu. Collins is sure to do better with that initial experience under his belt and is one to look out for in a similar contest.

Ellmarie Holden had a useful hurdler in Ex Patriot who was fourth in the Triumph Hurdle a few seasons back, and French Aseel looks another youngster for the stable capable of making his mark at a high level in juvenile company. Leopardstown’s three-year-old maiden hurdle has a rich history, with its recent winners including the Triumph winner Ivanovich Gorbatov, and French Aseel produced one of the best performances seen in the division so far this season in landing a gamble with ease. Sent off the 7/2 favourite for his hurdling debut, French Aseel travelled strongly, was left in front when the pace-setter folded before the last, and then draw clear on the bridle to win hard held by 22 lengths from the runner-up Coltor. French Aseel had been a fairly useful performer on the Flat in France, where he won over a mile, before being bought out of Philippe Decouz’s stable for €62,000 last summer. Other recent winners of this contest, Mr Adjudicator and Sir Erec, both returned to Leopardstown to win the Grade 1 Spring Juvenile Hurdle and that looks the obvious next step for French Aseel.

🥇🤩 Summer Sale graduate 🇫🇷FRENCH ASEEL turns a few heads on his 🇮🇪 Irish debut for @EllmarieHolden !
The 3yo son of #FrenchFifteen was bought by Michael Shefflin & Paul Holden from @PDecouz.

Four of the last five winners of the Pertemps Final have contested the Leopardstown qualifier in that series and Monday’s race looked a really competitive renewal of a race that’s therefore worth a close look with the Cheltenham Festival in mind. Winner Dandy Mag was one of Willie Mullins’ many successes over the four days, while runner-up The Bosses Oscar shaped well for Gordon Elliott, but it was the Jessica Harrington-trained Morosini who was very much the eyecatcher in sixth, bagging the last of the qualifying places for the series Final. Having only his second start over three miles, Morosini was shuffled back by another of JP McManus’s runners just as the race began to develop and met further trouble, including when short of room as he made headway going to two out, before staying on gradually in the straight. About to turn six, Morosini was successful twice last season and began the current campaign over fences (looks sure to improve in that sphere), but for the time being all roads will surely lead to the Pertemps Final now – McManus’s Sire du Berlais filled the same position in this race two years ago before the first of his two victories in that contest at Cheltenham.

16/1 winners are fairly unusual for these two!

Dandy Mag comes from well off the pace under a well-timed ride to land the Pertemps qualifier for Willie Mullins and @PTownend at @LeopardstownRC pic.twitter.com/sa0Py28TM4

This maiden hurdle was another contest that went to the red-hot Mullins stable with the well-backed Stattler driven out for a three-length win, but stablemate Glens of Antrim attracted support too and shaped like a certain future winner in chasing him home. Having just her second start and therefore still having something to learn, she nonetheless made up a lot of ground on the more prominently-ridden winner through the final third of the race. Not always fluent with her jumping in midfield, Glens of Antrim made smooth headway to chase the leader entering the straight and held every chance over a furlong out before Stattler asserted. Glens of Antrim had finished a promising fourth on her debut at Punchestown just over a month earlier and proved a different proposition here stepping up half a mile in trip. Her useful sister Minella Melody was also runner-up later on the card in the Grade 3 mares’ hurdle, and they are out of a sister to Glens Melody who won the Mares’ Hurdle at Cheltenham for Mullins. Glens of Antrim looks another good prospect for a stable whose record with mares is second to none.

🔷Stattler 🔷 holds off the challenge of stable companion Glens of Antrim to give @WillieMullinsNH and 🥇🥈 in a competitive renewal of the @Pigsback_IE Maiden Hurdle ⏬ pic.twitter.com/lYipM76Ypr