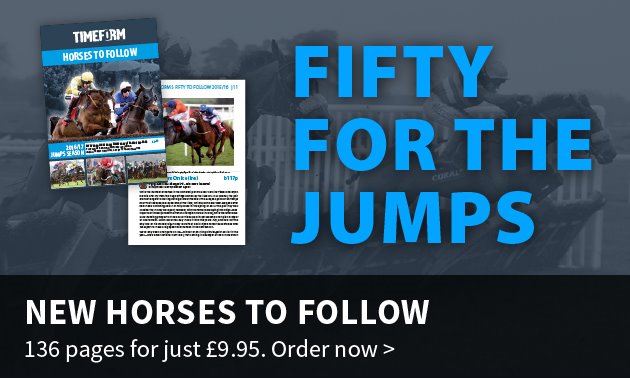 The reappearance of some of the bigger National Hunt names in recent days is a firm sign that the core jumps season is right around the corner. Prepare yourself for the campaign in the best possible way with the latest edition of Timeform's Jumps Horses To Follow.

The mainstay of the book is The Fifty—the 50 best prospects for jumps races in Britain this season chosen. Last year’s Fifty included the likes of Unowhatimeanharry, Bristol de Mai and Camping Ground, and the jumps team at Timeform again spent weeks poring over race replays and form lines to finalise this year’s list, which contains a good blend of hurdlers and chasers, two-milers and stayers, novices and established handicappers. So, order your copy of Horses To Follow 2016/17 today to discover which horse “has the makings of a smart hurdler and can be expected to play a leading role in some of the biggest handicaps”, and which horse “looks set to be a big player in all the big long-distance handicap chases this season, with the Welsh National perhaps at the top of his agenda.”

The Fifty are backed up by 10 top prospects from Ireland, which last year included Empire of Dirt who went on to win at 16/1 (at the Cheltenham Festival) and 8/1. Want to know which horse we feel “could well develop into a live contender for the 2017 Champion Hurdle”? Or which “could even develop into a top-class two-mile chaser”? There’s only one way to find out—buy Horses To Follow 2016/17 now!

As well as the Fifty and the 10 from Ireland, there’s all the usual extra features, too. We’ve again spoken to a number of leading trainers for Talking To The Trainers and asked them for the own personal horses to follow. Get the book to find out which horse Nicky Henderson says has “grown considerably during the summer and looks every inch a chaser”, and which horse Harry Fry says is “a big, imposing five-year-old that we think can go on and be a very decent chaser”.

Last year’s Ante-Post Betting section featured the recommendation to back Thistlecrack at 25/1 for the World Hurdle. We have again recommended ante-post bets for the King George VI Chase, Champion Hurdle, Queen Mother Champion Chase, World Hurdle, Gold Cup and Grand National, including horses currently priced at 66/1 and 33/1. Rising Stars has also been a successful feature in recent years, having flagged up the likes of Dan Skelton, Harry Fry, Sean Bowen and Jack Kennedy, and we’ve again highlighted a couple of up-and-coming trainers and jockeys to keep on your side.

There’s also the Review of 2015/16, which brings you Timeform race reports on a number of the biggest races and all the relevant statistics, while the final section of the book contains all the ratings for the highest-rated performers in each division last season, a list of Promising Horses from a number of yards and the trainers to follow at each of the National Hunt courses.

Horses To Follow is not a one-off either, either—be sure to stay in touch all season long! Subscribe to Horses To Follow Extra and you'll make the best-informed betting decisions throughout 2016/17. Don't miss the big-race previews, features and analysis, covering all the big meetings such as the Cheltenham Festival and Aintree's Grand National fixture. You'll save at least £20 when you sign-up for the series in advance, with the first of 10 issues out for the Cheltenham Open Meeting in November. Order now!