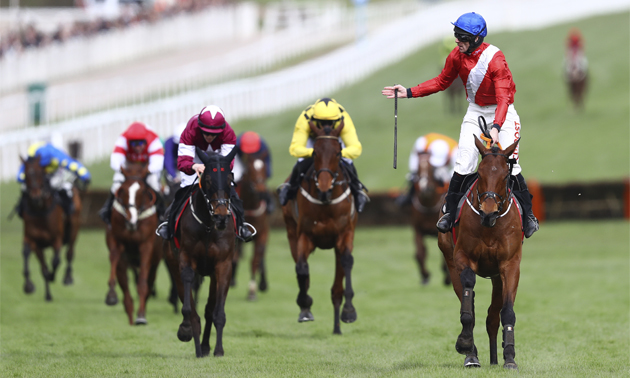 With the final events of the 2019/20 jumps season officially cancelled, Adam Houghton dishes out some end of season awards to the standout performers on Timeform ratings - plus a few personal highlights.

The latest renewal of the Dublin Chase didn’t boast the same depth as the Tingle Creek at Sandown earlier in the season, but it still offered up an intriguing clash between two of the very best 2m chasers in Ireland, namely the Willie Mullins-trained pair of Chacun Pour Soi and Min.

The pair soon had the race to themselves as the pace lifted from three out, and the way Chacun Pour Soi swept by his stablemate on the home turn identified him as a chaser of the very highest order, ultimately landing the spoils readily by three and three quarter lengths from Min. There were another 24 lengths back to the third, Ornua, and the winner’s performance was as eye-catching on the clock as it was to the eye (176 timefigure).

Chacun Pour Soi was sadly ruled out of the Champion Chase at the eleventh hour due to a minor setback, but he should continue to be a big player in this division in 2020/21, with the ‘p’ attached to his rating denoting that he may yet have an even bigger effort in the locker.

Incidentally, the subsequent Ryanair winner Min also recorded a top-class performance rating (171) in defeat at Leopardstown, while the only other horses to achieve a rating of 170+ in the latest season were the first two from the 1965 Chase at Ascot, Cyrname (174) and Altior (171).

Up-and-comers in the 2m division are seemingly thin on the ground, with the likes of Notebook (155) – who was unbeaten over fences before flopping in the Arkle at Cheltenham – still having plenty to find to come up to the level of Chacun Pour Soi and co.

The same cannot be said about the staying novices in the latest season, however, and Champ certainly appeals as one with the raw ability to make a significant impact in open company in 2020/21, having gone unbeaten in his three completed starts over fences to date.

Admittedly, the eight-year-old looked an unlikely winner for much of the RSA at Cheltenham last time – he still had eight lengths or so to make up at the last – but it was impossible not to be struck by the way he responded to lead in the final 50 yards, beating a pair of similarly bright prospects in Minella Indo (160p) and Allaho (158p).

Still totally unexposed over 3m+, Champ certainly showed enough to suggest he will relish the longer trip of the Gold Cup, for which he must be considered a leading contender in 2021 if brushing up on his jumping.

The three novice hurdles at the 2020 Cheltenham Festival were all above-average renewals according to Timeform ratings, and the respective winners each have plenty to recommend them for the future, with the Supreme hero Shishkin (159p) and the Albert Bartlett winner Monkfish (150p) both appealing as exciting recruits to the chasing ranks in 2020/21.

Plans for Envoi Allen (160p) are seemingly open to more debate, but, whether he stays hurdling or goes chasing next season, he should continue to prove very hard to beat if the evidence of his dominant success in the Ballymore is anything to go by.

The unbeaten run stretches to EIGHT!

Sent off the 7/4-on favourite after winning each of his seven previous starts under Rules, Envoi Allen briefly looked in trouble to these eyes on the home turn, with the first two appearing to have stolen a march. Those doubts were only fleeting, though, such was the irresistible run he produced to take off upsides at the last, drawing clear from there with such authority that he can only be considered a top-class prospect.

Indeed, the fact he only ever seems to do enough in his races means we don’t yet know just how good he could be, with the potential there for him to become a true great of the sport.

As touched upon previously, the latest renewal of the Tingle Creek attracted as deep a field for the race as there has been in many years, with six of the eight runners coming into the Grade 1 rated within 5 lb of one another on Timeform’s figures.

It took a top-class display to win it, too, courtesy of a rising star in the division, Defi du Seuil. A high-class novice in 2018/19, he improved again to deny the 2016 winner and 2018 runner-up Un de Sceaux in a thrilling finish, keeping going well after the last to hold off Willie Mullins’ rallying veteran by a neck, with the fast-finishing Waiting Patiently only three quarters of a length further back in third.

There were similarities to be drawn with the epic 2004 renewal, when the first three home – Moscow Flyer, Azertyuiop and Well Chief – all produced performances of outstanding merit.

Yes, the quality was down on that high benchmark, but Defi du Seuil still posted one of the best efforts in the race in the intervening period. The seven-year-old followed up on his next start in the Clarence House at Ascot, and, though a major disappointment when sent off the 5/2-on favourite for the Champion Chase, he’ll still be remembered fondly for the role he played in my favourite race of the 2019/20 campaign.

Barry Geraghty might count himself unlucky to miss out after his never-say-die effort aboard the aforementioned Champ at Cheltenham, but great rides don’t have to come on such a high-profile stage, with no finer example than the heroics Jack Tudor produced to get Buster Edwards home in front at Haydock in late-December.

Sent off favourite for the Bryn Gates Conditional Jockeys’ Handicap Hurdle, Buster Edwards took little interest for much of the race and came off the bridle a long way out. Matched at the maximum price of 999/1 in-running on the Betfair Exchange, he still had no fewer than six rivals to pass at the last and was seemingly treading water himself at that point.

Buster Edwards, the 7/2 favourite, comes from out of the clouds to win the 3m handicap hurdle @haydockraces under Jack Tudor.

£289 was matched on the winner at the maximum price of 999/1 on Betfair! 👀 pic.twitter.com/FAscHJFRI1

Even now, the second wind he found on the run-in has to be seen to be believed, staying on strongly out wide to collar Strike West – who reached an in-running low of 1.01 – on the line.

His promising young rider deserved the utmost credit for managing to get Buster Edwards motivated, and it wasn’t the only time that Tudor was seen to great effect in the latest season, notably belying his inexperience to guide Potters Corner to an assured success in the Welsh Grand National at Chepstow.

By Gordon Elliott’s own admission, Samcro has been a difficult horse to train since sweeping all before him as a novice hurdler in 2017/18. Comfortably held in his three starts the following season, he looked much more like his old self when making a successful chasing debut at Down Royal in November, but it was back to the drawing board after another comprehensive defeat at the hands of Faugheen at Limerick over Christmas.

“Samcro is a very hard horse to keep right,” Elliott conceded at a Cheltenham press day in February. “We had problems with him last season not scoping right, and he did not scope great after Limerick.”

Elliott also revealed the extraordinary lengths he had gone to in his attempt to restore Samcro to his former glories. These included building the eight-year-old his own custom-made stable with an outdoor area at the back, whilst he had also undergone another breathing operation since Limerick.

The fruits of Elliott’s labour were there for all to see when Samcro resumed winning ways in the Marsh Novices’ Chase at Cheltenham last time, by which point many people had written him off.

Admittedly, a nose-defeat of Melon didn’t represent much in the way of improvement in bare form terms. However, in other ways he was a different horse to the one we saw earlier in the season, looking a picture in the preliminaries and finding far more under pressure than has often been the case, both developments for which his trainer rightly received plenty of plaudits.