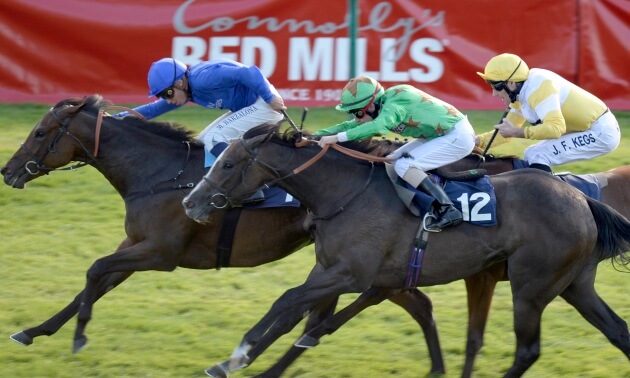 Given the current unprecedented situation of a prolonged period of no racing, the most obvious starting point is trainers’ records with horses returning from a break, with a minimum of 180 days chosen. At this stage it should be pointed out that a year’s worth of data provides an insufficient sample size from which to draw firm conclusions, so data from the start of 2015 has been used in the analysis for this article.

Saeed Bin Suroor tops this particular list, sorted by Impact Value (winners expected by chance), with an IV of 2.75 and a very impressive near-33% strike rate (54 winners from 164 runners) to go with very positive Profit/Loss (P/L) figures too. With Charlie Appleby also coming out quite positively on this front, runners in the blue of Godolphin can be backed with some confidence of being fit and ready to do themselves justice when racing does resume.

It is largely the same names that appear at the top of this list if the criteria is limited to runners in handicap company, though Daniel Kubler is also worth a mention here, admittedly with quite a limited sample size but with a couple of placed horses at big prices to go with the winners (4-20; IV 2.19; +53.19 BSP).

Trainers to note with new recruits running in handicaps

As well as horses returning from breaks, another factor that is quite common towards the ‘beginning’ of a Flat season is horses starting out for a new yard, so this was an area at which I was keen to look. Restricting this to handicaps only, there are a number of very profitable trainers. Domestically, Michael Appleby has been the king of stable switchers for quite some time. His prowess with new recruits is well known but that hasn’t stopped his runners being very profitable in the past five years, and the evidence of the latest all-weather season (+43.75 LSP) suggests this is likely to continue to prove a significant angle.

Rather shorter on number but with a huge strike rate in this department is Ger Lyons. Of the 20 horses who’ve had their first runs for him in a handicap over the past five seasons, eight have won (IV 4.6). These are staggering numbers, and, it is even more impressive that the three stable debutants in handicaps that won for him in 2019 (from just four such runners) came from big yards, two from Sir Michael Stoute and one from Roger Charlton.

Gavin Cromwell features very prominently but, returning to Britain, this is another area in which Jane Chapple-Hyam does particularly well (7-36; IV 1.73; +72.24 BSP), so any horse having their first start for her reappearing after more than six months off deserves particular attention. Ivan Furtado boasts some good numbers (14-82; IV 1.67; +29 BSP), and it’s worth pointing out that he also fares extremely well with handicap debutants. In the North, horses that have joined Keith Dalgleish are well worth a second look (12-62; IV 1.68; +20.8 BSP), while John Mackie is someone who punches well above his weight in this regard.

The first big handicap of the season goes to Karawaan who wins the Tote Irish Lincolnshire under Colin Keane 👏 pic.twitter.com/4BK0pPKdX0

However, delving into trainers’ records with horses having their second start in a handicap (irrespective of how they performed in their first) reveals some interesting stuff. The theory behind this is more solid, maybe a horse wasn’t particularly competitive and didn’t learn much in maidens/novices and their first experience of a handicap might have taught them a good bit more.

The Irish pair of Gavin Cromwell (again) and Willie Mullins come out very well on this front, while there are several British-based trainers worth highlighting and delving into in more detail.

David Menuisier is the first to mention as an overall record in the timeframe of 8-36 with an IV figure around 2 was boosted by a particularly good 2019 in which he had four winners and a second from just seven such qualifiers. Marcus Tregoning’s figures are just as good from a bigger sample (15-62; IV 1.99; + 41.12 BSP) and with 12 second places to boot - nearly 44% of his runners having their second start in a handicap finished first or second.