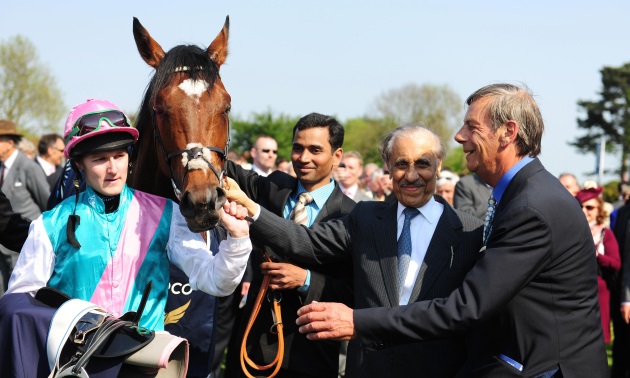 Following the news of Prince Khalid Abdullah’s death, read about the three highest-rated horses to have carried his iconic green, white and pink silks.

Frankel was unbeaten in all 14 of his starts and is the highest-rated Flat horse in Timeform’s history, a phenomenon of the sport. The remarkable scenes that followed Frankel's tenth Group 1 win – and ninth in succession – in the Champion Stakes at Ascot provided a fitting farewell for a horse described afterwards by trainer Sir Henry Cecil as "the best I've ever had, the best I've ever seen, I can't believe that in the history of racing there has ever been better".

Dancing Brave’s Timeform rating of 140 puts him in a select group of outstanding racehorses. Others have reached the same level – most recently Sea The Stars and Harbinger – but only the same owner’s Frankel has surpassed that benchmark in the decades since Dancing Brave. Dancing Brave’s best performance came when winning a vintage renewal of the Prix de l’Arc de Triomphe in 1986, where he produced an electrifying burst to sweep past the best middle-distance horses in Europe as though they were standing still.

Arrogate fell from grace towards the end of his career, but that shouldn’t detract from what he achieved up to that point, once being described by trainer Bob Baffert as "America’s dirt version of Frankel" and "possibly the greatest horse we’ve seen since Secretariat." Arrgogate ended his career as the highest-earning horse in history at that point, with wins in the Breeders’ Cup Classic, Pegasus World Cup and Dubai World Cup helping him to a total haul of $17,422,600.