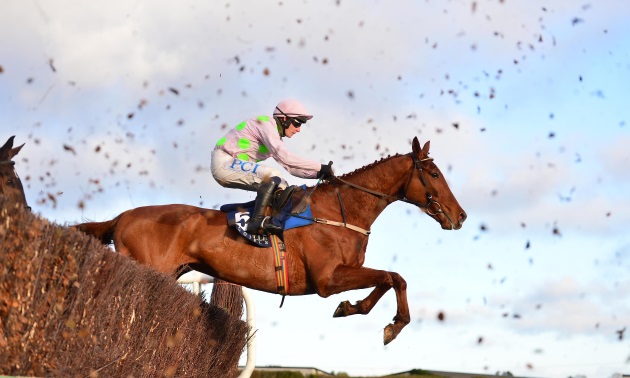 In the latest of our series profiling the claims of a leading Cheltenham Festival candidate, Adam Houghton assesses the chance of Monkfish winning at the meeting for the second year in a row in the Brown Advisory Novices' Chase.

The case for Monkfish

Monkfish (Timeform rating c164p) proved steadily progressive in four starts over hurdles last season, culminating with a smart performance to win the Albert Bartlett Novices’ Hurdle at the Cheltenham Festival. That was a strong renewal in which he showed a good attitude to withstand the challenge of a previous Grade 1 winner in Latest Exhibition by a neck, with the third Fury Road and fourth Thyme Hill also being beaten less than a length and a half in a thrilling finish.

Both Fury Road and Thyme Hill feature prominently in the ante-post betting for the Stayers’ Hurdle at the 2021 Cheltenham Festival, but that race was never on the agenda for Monkfish, whose future was always going to lie over fences given his background (point winner) and physique (tall gelding). That future certainly looks a bright one judged on the evidence of his brief chasing career so far.

To summarise, Monkfish has won all three starts over fences this season by a cumulative margin of 18 lengths. He’s taken to chasing at least as well as could have been expected, nothing exemplifying that better than the showreel round of jumping from the front he put up when winning the Flogas Novice Chase at Leopardstown last time. He had a lead of a couple of lengths at the last and barely needed to come off the bridle to draw right away on the run-in, ultimately winning by 11 lengths from old rival Latest Exhibition, who had pushed Monkfish closer in the Neville Hotels Novice Chase at the same course six weeks earlier.

All roads now lead to the Brown Advisory Novices’ Chase at Cheltenham, for which Monkfish is as short as 11/8-on in the ante-post betting. He has already shown form that would be good enough to win an average renewal of the race, while the small ‘p’ attached to his Timeform rating denotes that he is still open to more improvement.

🐠 Monkfish - what an incredible talent

The case against Monkfish

It’s obviously very hard to find fault with what Monkfish has achieved over fences, looking a natural jumper and a very straightforward ride (usually races prominently). However, it’s always worth remembering that no horse is bombproof in a novice chase at the Cheltenham Festival, as the race formerly known as the RSA Chase has demonstrated on numerous occasions over the years.

Admittedly, Monkfish possesses a higher Timeform rating at this stage of the season than any horse to have contested the RSA since the turn of the century (Denman had a rating of 160p before his victory in 2007). However, there have been several others who looked head and shoulders above their rivals but were still beaten, including Time For Rupert (7 lb clear on pre-race ratings) and Grands Crus (5 lb clear on pre-race ratings).

Monkfish is already shorter in the ante-post betting than any of them were sent off on the day, which is testament to the regard in which he is held. However, it’s hard to argue that there’s any mileage in his price with a little over three weeks between now and the Festival.

The Tank was sent off 5/4 favourite for the 2007 RSA Chase and duly powered home under Ruby Walsh.

Trainer Willie Mullins said after Monkfish’s win in the Flogas Novice Chase at Leopardstown: “Today I was more impressed than any day. It looks like he might be getting better with each run, it was the ease with which he did it. Everything is just so effortless. He just goes down, jumps and gallops. He seems to always be in the right position, he has huge scope. No matter where he is he gets his shoulders off the ground and bends his back. Paul [Townend, jockey] never looked worried, he looked like he was a lead horse for the others, turning for home. It’s as easy watching him as any horse, he just does everything so easily.”

The race now known as the Brown Advisory Novices’ Chase may have provided some shock results over the years, but a defeat for Monkfish in the 2021 renewal would potentially top them all, such is the impression he’s created since embarking on a chasing career.

His jumping has been faultless, earning the ‘j’ (jumped well) or ‘J’ (jumped very well) in-play symbols on all three starts over fences, while the fact he’s already proven his effectiveness at Cheltenham in winning last season’s Albert Bartlett is also a big plus.

Royal Pagaille (163p) would be a big rival if lining up here, though that seems unlikely given that he represents the same owner as Monkfish. That leaves the likes of Sporting John (154), Next Destination (153p), Eklat de Rire (150p) and The Big Breakaway (149p) to head the opposition, but they all have plenty to find on Timeform ratings to come up to Monkfish’s level.

Indeed, it’s well worth underlining the point that Monkfish is rated higher at this stage of the season than any other horse to have contested this Grade 1 since 2000. With further improvement on the cards, he rates a top-class chaser in the making and banker material for the Brown Advisory Novices’ Chase at the 2021 Cheltenham Festival.