Memorable moments from the racing world in 1996 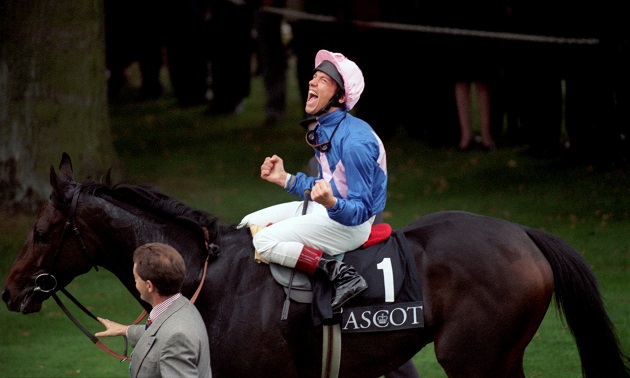 Football fans are reliving Euro 96 thanks to ITV's coverage of the tournament, and here's what was happening in the racing world that year.

Mick Fitzgerald and Rough Quest had to settle for second behind Imperial Call in the Cheltenham Gold Cup. However, connections would not have to wait long for their day in the sun.

Only 27 runners - an unusually small amount - went to post for the 1996 Grand National, and they included Rough Quest, who was turning out at Aintree just 16 days after his valiant effort at Cheltenham. He held an obvious chance at the weights at Aintree, not only based on his Gold Cup second but also on his Racing Post Chase success off the same mark, and he had plenty of supporters, being sent off as the 7/1 favourite.

Rough Quest had fallen in the John Hughes two years earlier on his only previous start at Aintree, but he had developed into a much better horse by the time of the Grand National and was essentially a very good jumper.

The race panned out ideally for Mick Fitzgerald’s mount, who crept closer from the Canal Turn. Encore un Peu, who was 9 lb out of the handicap, quickened ahead at the second-last, but Rough Quest loomed up travelling powefully and there with a sense of inevitability about the result. Rough Quest passed his rival after the elbow, edging left as he did so, but any interference looked accidental and ultimately made no difference to the result. That did not stop the stewards reviewing the replays for 15 minutes but Rough Quest was eventually announced as the winner.

After the race Fitzgerald was asked about his emotions by BBC broadcaster Des Lynam, to which he famously replied: “After that, Des, even sex is an anti-climax.”

How good was this @mickfitzg? 😏

The emergence of Pivotal - star sire of the future

Pivotal had created a favourable impression as a juvenile, winning a maiden at Newcastle and a minor event at Folkestone, and he took the huge step up in class in his stride to win the King's Stand Stakes - then a Group 2 - at Royal Ascot on his reappearance.

The race attracted a huge field of 17, with Pivitol really catching the eye beforehand. The Sir Mark Prescott-trained three-year-old had no trouble going the pace towards the stands' side and moved up to lead that group a furlong and a half out. Mind Games had dominated on the far side and still held an overall lead as the line approached. However, Pivotal dug deep to peg back his rival close home, confirming himself as one of the best sprinters around.

Pivotal was beaten in the July Cup over six furlongs but quickly bounced back over five furlongs in the Nunthorpe, once again coming out on top in a tight finish and impressing with his strength in the latter stages. That was a career-best performance from Pivotal, who earned a Timeform rating of 124, but his greatest legacy is what his progeny have gone on to produce.

Pivotal developed into an excellent sire, responsible for a whole host of pattern-race winners over a variety of trips, including Farhh, who won the Champion Stakes over 1m2f, and Kyllachy, who emulated his sire by winning the Nunthorpe over five furlongs.

Sire of 30 Group 1 winners, the great Pivotal (@Timeform rated 124) still looks in great shape at 27yo (one year older than me!) and is once again set to cover a small book of mares @CPStudOfficial in 2020 pic.twitter.com/q0Un9jxuXY

Halling wins a second Eclipse as Godolphin continue on the up

Halling went from strength to strength in ’94 for John Gosden, winning the Cambridgeshire on his final start, before being sent to Saeed bin Suroor, who had recently been appointed the main trainer for Sheikh Mohammed’s Godolphin operation.

After wintering in Dubai, where he won all three of his starts, Halling returned to Britain in 1995 to land his first Eclipse, continuing the unprecedented success for the Godolphin team. Having won the Prix d'Ispahan on his first start in Europe in 1996, Halling returned to Sandown, bidding to retain his Eclipse crown. Similarly to the previous year, Halling was allowed to dictate the gallop, setting no more than a fair pace.

St James’s Palace winner Bijou d’Indie was ridden prominently as usual, and ran on bravely to challenge Halling, who found plenty under pressure. Halling was a neck in front when he edged quite sharply right virtually on the line, hampering his rival slightly, but not enough to affect the result, taking his winning run on turf to seven.

Halling’s victory provided Saeed bin Suroor with yet another major win in what was rapidly turning into another golden summer for the Godolphin man. By the time Halling landed his second Eclipse Bin Suroor had already that year won the Queen Elizabeth II Cup in Hong Kong (Overbury), the 2000 Guineas (Mark of Esteem), the Queen Anne (Charnwood Forest) and the Ascot Gold Cup (Classic Cliche).

It was a day that still brings bookmakers out in cold sweats. Ascot's high-class card, headlined by the Queen Elizabeth II Stakes, started with the Cumberland Lodge Stakes, in which the genuine and consistent Wall Street was ridden to a half-length success by Frankie Dettori. Next up for Dettori was Diffident, who, like Wall Street, was also owned by Godolphin and trained by Saeed bin Suroor. It was a messy running of the Diadem Stakes and Diffident, a relatively unfancied 12/1 shot, was a rather fortuitous winner, just holding off the late thrust of Lucayan Prince to give team Godolphin the perfect start to the day before Mark of Esteem's assignment in the QEII.

Diffident may have been fortunate but Mark of Esteem was an authoritative winner, quickening magnificently to leave his rivals trailing in his wake.

As the bookmakers licked their wounds, Decorated Hero hacked up in the Festival Handicap under Dettori, producing a very smart performance to win conceding weight all round, before Fatefully overcame a rise in the weights herself to take Dettori’s run to five in the Rosemary Rated Stakes.

Excitement was now building and the once-raced Lochangel - a half-sister to the top-class sprinter Lochsong - was sent off the 5/4 joint-favourite for the Blue Seal Conditions Stakes. She duly obliged, leaving Dettori just one win away from completing the unprecedent feat of landing every contest on a seven-race card.

Only Fujiyama Crest remained. He had been available at double-figure odds in the morning but, with off-course bookmakers determined to reduce their liabilities, he was backed in the ring and sent the 2/1 favourite in the Gordon Carter Stakes. Splendidly ridden from the front, Dettori’s final mount of the day was given a breather at halfway before winding it up again from five out and battling on gallantly up the straight to hold off Northern Fleet, ensuring that he would be a quiz question for many years to come.

For Dettori it meant a slice of history and joyous celebrations in the winner's enclosure; for the bookmakers it meant a huge payout, estimated at more than £30 million. Fujiyama Crest would eventually spend his retirement as a pet for the Dettori family.

Rewind to THAT day in September ’96, when Fujiyama Crest kept his head in front to win the last and Frankie went 7/7 at #Ascot! 👏 pic.twitter.com/mL8DIhojoo