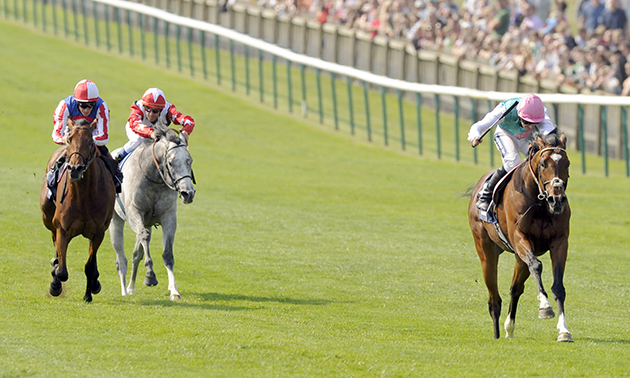 Timeform revisit some of the most iconic races of the 2010s. Here we take a look at Frankel’s breathtaking victory in the 2011 renewal of the 2,000 Guineas.

Frankel started his career in fine style, winning a Newmarket maiden by a half-length, creating a very good impression in beating a fellow top prospect in Nathaniel. He also looked something special when dispatching two rivals in no uncertain terms at Doncaster, before stepping up to Group company in the Royal Lodge at Ascot, where he produced one of the best performances from any juvenile in recent years to record a ten-length success.

🗣️ "This was something very special, not only jumping to the head of the 2-y-o division in 2010 but producing one of the best performances from any juvenile in recent years"pic.twitter.com/0siFjcF5y8

His clash with fellow unbeaten rivals Dream Ahead and Saamidd made the Dewhurst one of the most eagerly awaited races for a long time, and, though his chief rivals failed to meet expectations, the manner in which Frankel maintained his unbeaten record was again impressive.

On his return in the Greenham Frankel brushed aside Excelebration – a rival he would be seeing plenty more of – to cement his odds-on status for the 2,000 Guineas.

Sporting his usual noseband, Frankel looked class, full of condition and muscle, and perfectly relaxed before the 2000 Guineas

Rider Tom Queally adopted an attacking policy, which was refreshing to see but needed a special horse to pull it off as Frankel was more or less let loose from the start, rolling along at a speed that looked comfortable to him but at which none of the other could cope, to the extent that he was well clear by halfway.

Just as impressive as Frankel’s early acceleration was the way he maintained the gallop, the field spread out at wide margins behind him, amongst them several Group 1 winners, including Roderic O'Connor, Casamento and Pathfork. They tried to give chase but all finished tired and down the field, a testimony to Frankel’s ability.

It takes something extraordinary to do what Frankel did - Dubai Millennium in the World Cup and Hawk Wing in the Lockinge spring to mind - but Henry Cecil’s charge was still only a three-year-old, and went much harder, much sooner in what was at that point his defining race.

A performance in which even the huge rating from the bare facts of the result doesn't do him full justice.

It takes something extraordinary to do what he did here.pic.twitter.com/veW7of4uNv

The race will go down in history, and all because of the phenomenal performance put up by Frankel, not only the form he showed, putting him in the elite bracket of Guineas winners, but also the manner in which he achieved the feat, bossing a classic in a way that has rarely, if ever, been seen.

Frankel’s victory represented a 25th British classic success for trainer Henry Cecil, who deserves a huge amount of credit for his role in the Frankel phenomenon, the horse being produced in immaculate shape for that race, enabling him to serve up an explosive performance that will continue to be talked about for years to come.

Even in something of a golden age, with the likes of Canford Cliffs and Goldikova around, it was difficult to see anything beating Frankel over a mile, and there was even a suspicion that he could outrun the best sprinters.

Frankel extended his unbeaten record in the St James’s Palace Stakes at Ascot, but he had to work hard after doing too much too soon. He was much more authoritative in the Sussex Stakes at Goodwood, accelerating away from the top-class Canford Cliffs in a few strides, and he lit up the inaugural Champions Day at Ascot on his final start, landing the QEII by five lengths.

His four-year-old campaign saw him break yet new ground, however, as he won the Lockinge at Newbury before producing the greatest performance by a Flat horse in Timeform’s history in the Queen Anne Stakes at Ascot. In a well-run race, Frankel tanked to the front with over two furlongs left before bursting 11 lengths clear, earning a rating of 147.

Frankel had produced many astonishing performances already but this one broke new ground, achieving the highest Timeform rating ever on the Flat, surpassing Sea-Bird's 1965 Arc rating by 2 lb.pic.twitter.com/FIDZ32t3Kx

After landing a second Sussex, Frankel’s stamina was put to the test in the Juddmonte International Stakes at York. If there was anything left to prove, Frankel proved it there, making light of the longer distance and looking equally as effective as he had been over a mile.

His swansong came in the Champion Stakes at Ascot where he made it a perfect 14 wins from 14 races, bringing the curtain down on an extraordinary career and one which racing fans will talk about forever.