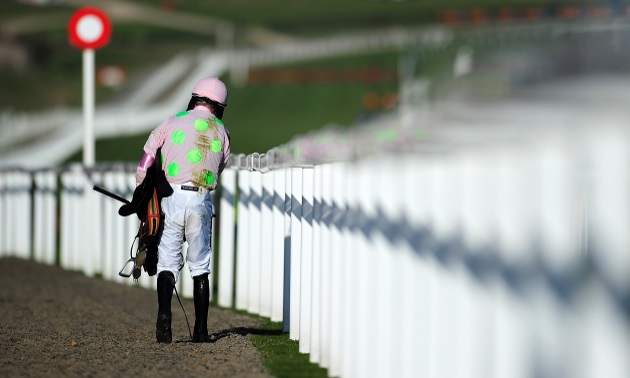 In a new series of articles, Timeform revisit some of the most iconic races of the 2010s. Here we take a look at Annie Power’s agonising fall at the final flight in the 2015 Mares’ Hurdle, which saved the bookmakers a huge payout.

With Quevega bidding for her sixth successive victory in the Mares’ Hurdle at the 2014 Cheltenham Festival, it was decided that Annie Power – a rapidly emerging force – would step up in trip to tackle the World Hurdle rather than face her stablemate. She may have lost her unbeaten record, on her 11th start, but she emerged with her reputation intact, finding only More of That too strong, and she quickly bounced back to winning ways in mares’ company at Punchestown.

After missing the early part of the 2014/15 season through injury, Annie Power arrived at Cheltenham after 10 months off as part of a powerful Willie Mullins quartet that had the bookmakers on edge.

What a performance from Faugheen in the 2015 Champion Hurdle! 😍 @CheltenhamRaces @WillieMullinsNH

Things quickly went from bad to worse for the bookmakers as Un de Sceaux, sent off at 4/6, won the Arkle, while the unbeaten Faugheen confirmed his superstar status with victory in the Champion Hurdle.

Next up was Annie Power…

In terms of form achieved, Annie Power was in a different class to any other mare in training, and she was sent off the 1/2 favourite – the shortest-price runner on the card.

The race was run at a true gallop from the outset as Bitofapuzzle forced the pace, with Carole’s Spirit and Emily Gray pressing her hard early on. Annie Power was always in touch, travelling powerfully under Ruby Walsh.

Annie Power moved into a handy position three furlongs out, making good headway, and she put in a great jump at the second-last to propel herself forward, before she produced an electric turn of foot that saw her quicken clear approaching the last. She was in full control as she neared the final flight, approximately six lengths clear of her rivals, and only had to jump it to secure the Mullins/ Walsh four-timer.

👿Trick: If you backed Annie Power – the final leg of the Willie Mullins Awesome Foursome.
😈Treat: If you were on Glen’s Melody, her stablemate.#TrickOrTreat #Halloween 👻 pic.twitter.com/gvDKx3xb58

However, with the race at her mercy, Annie Power clipped the final flight and came down in dramatic fashion, leaving a trio of smart mares to fight out a thrilling finish up the hill, a battle which Glens Melody eventually won.

The dramatic fall saved the bookmaking industry from a reported £50 million payout due to the liabilities they had racked up on various multiples involving the Mullins runners.

Annie Power quickly got back to winning ways, landing the Grade 1 mares’ race at the Punchestown Festival for the second year in succession.

After a ten-month break, she made the most of a simple task on her return at Punchestown and, with Faugheen ruled out of the Cheltenham Festival due to injury, connections opted to supplement her for the Champion Hurdle.

Annie Power didn’t need to improve on her best form to become the first mare since Flakey Dove to win the Champion Hurdle, proving a more than adequate substitute for Faugheen, and gaining some compensation for her agonising exit the previous year.

Her final race was in the Aintree Hurdle in April 2016, which she turned into a procession, retiring with only one defeat from 16 completed starts.