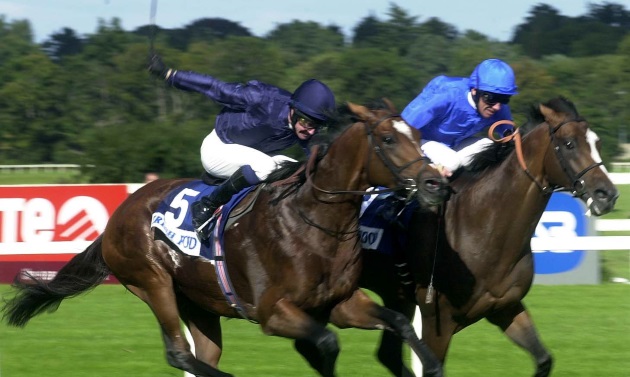 Timeform revisit some of the most iconic races of the first decade of the 2000s. Here we take a look at the fantastic duel between Fantastic Light and Galileo in the 2001 Irish Champion Stakes.

Galileo had carried all before him in the first part of the 2001 season, notable wins including the Derby and Irish Derby, before taking the scalp of Fantastic Light on his first start against his elders in the King George VI and Queen Elizabeth Stakes at Ascot. It was a fabulous renewal of Britain’s most prestigious all-aged prize, 11 of the dozen runners all pattern winners, with six of those at Group 1 level.

The race itself didn’t disappoint, either, Galileo becoming the first horse to complete the treble of Derby, Irish Derby and King George since Generous in 1991 when beating Fantastic Light by two lengths. However, Galileo didn’t do it with the authority of other outstanding winners of the race, essentially outstaying Fantastic Light in the 1m4f event.

It was the eighteenth and surely the most keenly anticipated renewal of the Irish Champion Stakes, and it certainly lived up to its billing, with Fantastic Light and Galileo providing a finish to savour as they raced almost head to head throughout the final two furlongs.

However, the result wasn't quite what the majority of the big crowd at Leopardstown were hoping for. Galileo's pacemaker, Ice Dancer, set off at a furious gallop and soon had six or seven lengths to spare over Give The Slip, who in turn raced three to four lengths ahead of stable-companion Fantastic Light with Galileo just behind him.

Fantastic Light was as tough and genuine a top-level performer as you would come across, and, dropped back to 1m2f, what was almost certainly his optimum trip, he turned the tables on his King George conqueror in thrilling fashion. In the process, he provided Godolphin with their third success in the last four runnings of the Irish Champion Stakes (all with older horses).

Galileo tracked Fantastic Light but never quite appeared to be travelling with the fluency which had been a feature of his previous successes. He was forced a little wide by Give The Slip turning in and, though responding valiantly to Mick Kinane's urgings, he was never quite able to get his head in front, meeting with a first defeat on his seventh start.

Fantastic Light rounded off an excellent career with victory in the Breeders’ Cup Turf at Belmont on his next start, not inconvenienced with the step back up to a mile and a half on a tight, turning track, still cruising into the straight then kicking clear before the runner-up started to cut him back late on.

Galileo also only had one more start, his in the Breeders’ Cup Classic, where he perhaps didn’t act on the surface trying dirt for the first time. He was immediately retired to stud and has since developed into one of the all-time great sires, his progeny including Frankel, the highest-rated racehorse in Timeform’s history.