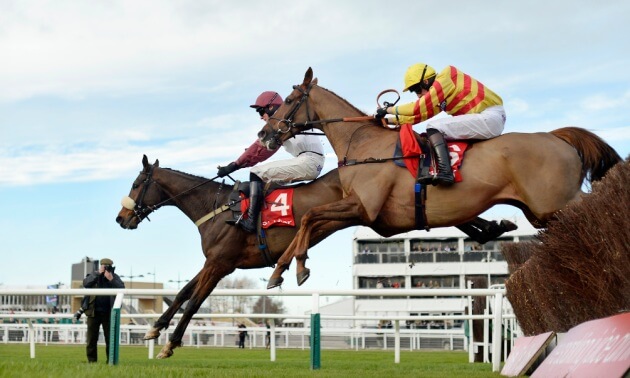 Graeme North explains how you can rate a horse's jumping ability and reveals which of Saturday's Paddy Power Gold Cup contenders are the most fluent over a fence.

On the eve of Cheltenham’s three-day November meeting, it’s an appropriate time to return to the topic of ‘jumpability’ – for want of a better term – and see how we can apply it (hopefully profitably!) to Saturday's Paddy Power Gold Cup. For those readers unfamiliar with the concept, ‘jumpability’ is an attempt to assign a ‘jumping’ rating to a chaser that expresses its jumping prowess, much as a form rating expresses its merit, and is calculated by utilising data that exists within the Timeform database.

For a long time now, Timeform has recorded for every performance (where one is deserved) ‘in-play symbols’ – effectively a short-hand notation that indicates positive or negative aspects of a horse’s performance such as responding very gamely to pressure (R) or travelling strongly through a race (K). The two symbols that interest us for 'jumpability', however, are x (or X) and j (or J). Long-time readers will be familiar with the x as it sometimes appears alongside a rating (or by itself) in the Timeform racecard, denoting a poor jumper. In contrast, a j (which like k or r isn’t a racecard symbol) signifies that the horse jumped well or, if awarded a J, outstandingly well.

Without divulging the exact methodology that underpins the process, ‘jumpability’ ratings are prompted by allotting a 0 or ‘jump neutral’ value to the horse if it has neither an x or j in-play symbol for a particular race and didn’t fall or unseat; a negative value that correlates to the positive value it gets given for a j if it attracts an x (and double that for xx or J); while falls or unseats are negated or overridden by a j or J symbol and x's and falls/unseats are not counted twice within the same race.

Those values are then referenced against all the tracks at which the horse has run, as falls, unseats or errors (or good rounds of jumping) have to be viewed less harshly (or more favourably) at some tracks than others. A horse might have accrued a series of J’s after running up a sequence at Lingfield Park, for example, but that horse wouldn’t have done enough to be rated an equally good jumper as one who has done the same around the Old Course at Cheltenham. After all, the Old Course at Cheltenham (over which the Paddy Power is run) is far harder to jump round cleanly than Lingfield, as we showed in our table of hardest and easiest jumping tests.

So how can we account for a good round of jumping at Cheltenham and an error-strewn round at Sligo? Leaving aside for the now the speed at which the horses approach the fences, which is almost certainly relevant on occasions (a disproportionate number of horses fall or unseat at the first in the Grand National, for example, or the first into the straight on the final circuit at Ludlow) but is difficult to quantify, the four most important factors that affect the ability to jump around cleanly are field size, race distance, race type (‘novice’ or ‘beginners’ event as opposed to handicaps) and underfoot conditions.

The likelihood of a mistake-ridden round of jumping is greater the larger the number of runners, the longer the distance of the race, the less experienced the horses in opposition and the softer the ground; an experienced handicapper that runs mostly in small-field chases at short distances against other seasoned horses on good or faster ground is less likely to make mistakes, other things being equal, than a novice that regularly lines up in long-distance beginners' events in the mud. These four main contributory factors (there are many others such as weight carried, assistance from the saddle and preparedness at home, but are hard to quantify) can be adjusted for and once this is done we can calculate an overall ‘jumpability rating’ for each horse.

Every time a horse runs over fences it has the opportunity to add to or diminish its ‘jumpability’ rating. Horses that have had fewer than five races are treated as jump neutral for each ‘missing’ race so as not to wrongly label a horse as either a superb or a lousy jumper on the basis of just one or two runs. ‘Jump neutral’ or neither good nor bad jumpers by definition have a rating of 0; how high or low a horse’s rating goes is dependent on how many x’s, J’s or falls and unseats it has accumulated and at which courses it has accrued them.

The 10 ‘best jumpers’ since 2010 that have had at least 10 starts over fences are shown in the table below. 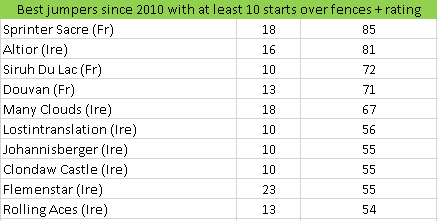 The joint-worst jumpers in the same period measured by this method both have figures of -90.

The figures for the horses declared to run in the Paddy Power are shown below. 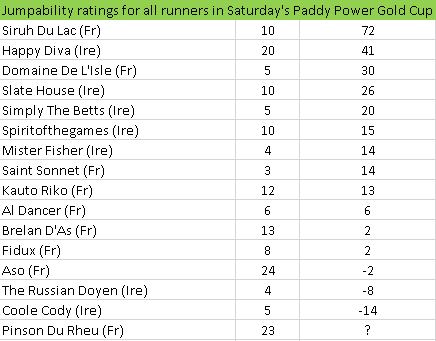 What is noticeable straight away is that one horse – Siruh du Lac - appears in both tables. His exalted position in the overall table might come as something of a surprise given he fell when disputing the lead when last seen here in March, but his record before that in well-run large-field handicaps (he usually forces the pace himself) around some of the toughest jumping courses has earned him the Timeform comment ‘usually a superb jumper of fences’. Siruh Du Lac has left Nick Williams since that fall and is now with David Pipe who has been among the winners with his better fancied runners in the last week, so one would expect him to be fully wound up.

Last year’s winner Happy Diva is next in the ‘jumpability’ ratings. She’s 8lb higher than she was last year when taking full advantage of the re-opposing Slate House’s fall two out. Slate House (who has also fallen here over hurdles) has been a bit of an underachiever and comes here with a bit to prove having finished last season under a cloud, but he leaves the impression he still has a bigger performance in him, goes well fresh and his stable has started to hit a bit of form.

Saint Sonnet wasn’t exactly blemish free here and at Catterick, while Coole Cody is respected on form – indeed he is Timeform’s top rated – but  might well find his jumping coming under greater scrutiny than in the small-fields novice events he has contested so far (two of his three runs this year have been at Newton Abbot, the only track in Britain and Ireland where the ratio of falls/unseats to runners is less than 4%).

Sound jumper Domaine De L’Isle has a likeable profile but might well find this trip too short, which brings us to Simply The Betts. In the top five on ‘jumpability’, his defeat of subsequent Festival winner Imperial Aura here in January was probably the strongest piece of novice handicap chase form last season.

Imperial Aura looked a potential Ryanair candidate when making a winning reappearance at Carlisle earlier this month, so a mark of 157 might not be beyond progressive second-season chaser Simply The Betts given that he gave Imperial Aura a 6lb beating in the aforementioned novice handicap before fending off Happy Diva in the Plate at the Festival.

Which courses pose the toughest test of jumping

Simon Rowlands: the value of sectionals over jumps