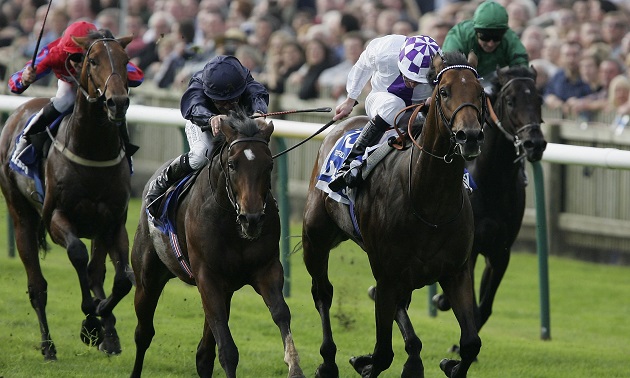 Timeform look back at four Flat horses who had extraordinary talent but didn't show the full extent of their ability.

There’s no doubt that Gorytus looked hugely promising for Dick Hern at the start of his two-year-old career in 1982, but quite why he never fulfilled classic hopes remains something of a mystery. He made such a good start that he was ante-post favourite for the 2000 Guineas after winning the Acomb Stakes at York by seven lengths in course-record time and then the Champagne Stakes at Doncaster by five lengths. He frightened off all bar three rivals in the Dewhurst Stakes, which looked a near formality at odds of 2/1-on, but Gorytus was beaten in a matter of strides and virtually pulled up.

His jockey Willie Carson said that he’d “run like a horse that had been got at” and while there had been no obvious signs of anything wrong before the race, theories circulated that he had indeed been doped in some way, though tests proved negative and no evidence of foul play was ever found. There was still enough confidence in Gorytus for him to be sent off the 7/2 second favourite in the following year’s Guineas, but he finished fifth there and failed to win another race, including when sent to the States as a four-year-old.

Kneller tends to be a forgotten horse because of his all-too-brief career, but as a three-year-old in 1988 he looked a future Gold Cup winner for Henry Cecil. He won his only start at two and remained unbeaten in four more starts at three when making into a high-class stayer. On only his third start all told, he landed an ante-post gamble in the Ebor, carrying just 7-10 and breaking the course record with a three-length victory. Kneller wasn’t entered in the St Leger, so ran in the Doncaster Cup instead where he proved himself more than just a handicapper by beating Sadeem (awarded that year’s Gold Cup), and then followed up by eight lengths in the Jockey Club Cup at Newmarket.

A flashy chestnut, Kneller had plenty of room to improve physically from three to four but sadly died just three weeks after his runaway win at Newmarket. He underwent surgery after suffering a bout of colic but couldn’t be saved. Sadeem, incidentally, went on to win the following year’s Gold Cup on his own merits.

Not only did Queen’s Logic make it through her two-year-old season in 2001 unbeaten, she also had a successful warm-up for the 1000 Guineas when reappearing with an odds-on success in the Fred Darling Stakes at Newbury. But having been ante-post favourite for the classic for months, she was found to be lame on her near-fore the day before the Guineas and had to miss the race. In fact, that was the last that was seen of her on a racecourse as coughing put paid to plans to run her in the Irish 1000 Guineas and she was retired later that summer.

Queen’s Logic therefore never had a proper chance to build on her high-class two-year-old form which had seen her win the Queen Mary at Royal Ascot, the Lowther at York and the Cheveley Park at Newmarket. She was particularly good in the Cheveley Park which she won impressively by seven lengths, putting up the best performance by a two-year-old filly in fifteen years. Queen’s Logic’s trainer Mick Channon had the misfortune to lose another leading 1000 Guineas contender just three years earlier when Bint Allayl, she too a Queen Mary and Lowther winner, broke a shoulder on the gallops.

“If he wants to be the next triple crown horse, I’m not going to stand in his way.” Those were the words of Teofilo’s trainer Jim Bolger after the colt had completed an unbeaten two-year-old campaign of five races in 2006. Like the latest unbeaten champion two-year-old Pinatubo, Teofilo’s last two wins came in the National Stakes at the Curragh and the Dewhurst Stakes at Newmarket. He beat the odds-on Ballydoyle colt Holy Roman Emperor, winner of the Phoenix Stakes, by a length and a quarter at the Curragh and then needed to rally to ensure a head win over the same rival at Newmarket.

As a son of Galileo, there was confidence in Teofilo staying the Derby trip, as well as having a favourite’s chance in the 2000 Guineas, hence his trainer mentioning the triple crown. Teofilo certainly had the physical scope to do well at three but he never got the chance to contest one classic, never mind three, as injury prevented him racing again. Holy Roman Emperor didn’t get to fulfil his two-year-old promise, either, but for very different reasons, being rushed off to stud to replace the previous year’s Guineas winner George Washington who was suffering fertility problems.