Five horses to look out for this weekend 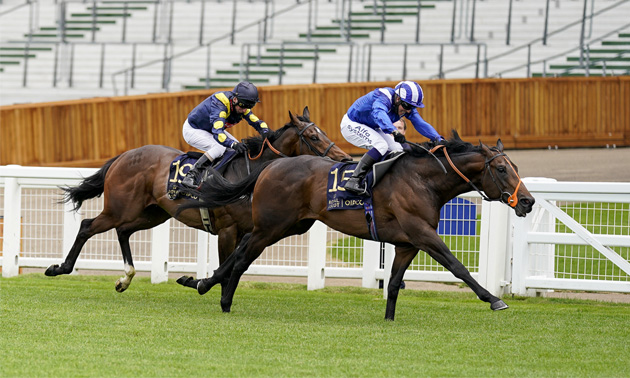 Timeform pick out five horses to follow in Britain this weekend.

Acklam Express has come a long way in a short space of time, winning three times since his career started in June, including when showing a good attitude to land the odds in a listed race at York in August.

He received plenty of weight and was well supported in the Scarbrough Stakes at Doncaster last time, but he didn’t really have the chance the market suggested up against some seasoned campaigners, and with a penalty to boot. He ran a blinder, however, shaping the best of those to have been on the speed, really laying it down to his older rivals but running just out of steam late on.

This looks an easier assignment for him, back against his own age group, and he remains an exciting sprinter well worth following.

Three on the bounce!

The Scottish Sprint Fillies’ Stakes hasn’t always been the strongest contest of its type, but this year’s renewal looks to boast some good performers, and the horse catching the eye at this stage has to be Keep Busy.

Keep Busy has stood plenty of racing to say she is still only a three-year-old, already having run 19 times in her career. A listed winner at Chantilly as a juvenile, she deservedly got off the mark for the season when showing improved form to win at Hamilton last month, and she has since hit the frame in the Sky Bet Fillies’ Sprint at York, the Beverley Bullet Sprint at Beverley, and the Flying Five Stakes at the Curragh on Sunday, producing a career best on the latter occasion, only going down to a proven Group 1 performer.

She is currently 8 lb clear of the next best in this field on Timeform weight-adjusted ratings, and she will likely take plenty of beating if turning up at Ayr.

Motakhayyel made his reappearance after eleven months off in the Buckinghamshire Stakes at Royal Ascot in June, and he looked determined to make up for lost time, handling the demands of a big-field handicap with aplomb, sustaining his run all the way to the front inside the final furlong, not stopping as he maintained his advantage.

He improved again to make it two big wins from two starts when landing the Bunbury Cup at Newmarket in July, winning a strong renewal of the race in relatively routine fashion and looking a sure-fire pattern-race winner in the making. He wasn’t in anything like the same form when well beaten in the Sovereign Stakes at Salisbury last time, the entirely different scenario seeming his undoing, but he remains lightly raced, and is worth another chance at this level.

✅ Unbeaten this season
✅ Unbeaten at @NewmarketRace

A Showcasing colt whose dam was a winner in Italy up to six furlongs, Alkumait is bred to make a speedy two-year-old, and heshaped with encouragement on his debut over this course and distance in July, getting the message late on and finishing well for fourth from further back than ideal. He was strong in the betting at Goodwood subsequently, and he duly built on his debut promise to get off the mark at the second time of asking, quickening to lead over a furlong out and winning with plenty in hand. This is obviously a stiffer task, but he will go on improving, is potentially useful and looks worth his place at pattern level.

Nice colt - Alkumait (Showcasing) takes a good step forward from debut to open his account in smooth style at @Goodwood_Races.

A winner for Marcus Tregoning before a certain Mohaather in the Sussex tomorrow! #QatarGoodwoodFestival pic.twitter.com/mZhLFKUbUe

After finishing down the field in a couple of big handicaps this season, Mr Lupton was given a chance by the handicapper in the Great St Wilfred at Ripon last month, and he very nearly took advantage, running his best race of the season up to that point, just finding two too good on the day.

He then confirmed the promise of that effort at the Curragh on Sunday, looking just about as good as ever in justifying favouritism, produced to lead over a furlong out and keeping on well to win a valuable sprint handicap in decisive fashion.

He was promoted to favourite for the Ayr Gold Cup in the aftermath of that performance and, while a break of less than a week perhaps isn’t ideal, it’s worth noting that he has won off the back of a quick turnaround in the past.

A Group 2 winner at this track in May last year, MR LUPTON bounces back to form with victory in the big sprint handicap at the @curraghrace for @RichardFahey and @ctkjockey!pic.twitter.com/1oFMiSNIyU