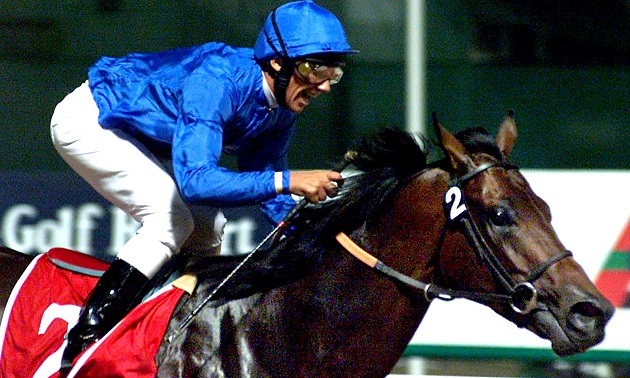 On what should have been the eve of the Dubai World Cup, Timeform look back on five stunning performances put up at the meeting.

Click here to read about the punting pointers that can help you turn a profit when the Flat season commences.

Almond Eye arrived at Meydan with a huge reputation having won the Japanese fillies’ Triple Crown and Japan Cup the previous season. Her success in the Japan Cup, which was achieved in an extraordinarily fast time, had really enhanced her reputation, and her presence at the Dubai World Cup sprinkled plenty of stardust on the meeting.

Sent off the 6/5 favourite in a field of 13, which also included two other Japanese raiders, Almond Eye was always travelling sweetly under Christophe Lemaire and made eye-catching headway into the straight before unleashing a powerful turn of foot that carried her into the lead.

Vivlos – who was also trained in Japan – and Lord Glitters gave valiant chase but they never looked likely to threaten Almond Eye, who effectively had the race sewn up from the moment she surged into the lead, eventually scoring by a cosy length and a quarter.

No European horse has ever won the Kentucky Derby but, following a destructive eighteen-and-a-half-length success in the UAE Derby, hopes were high in some quarters that the Aidan O’Brien-trained Mendelssohn would finally deliver that elusive victory.

In the event, Mendelssohn’s race at Churchill Downs – on a wet and wild day – was all but over upon leaving the stalls as he was cannoned into by a rival and could never get into a rhythm, eventually trailing home last of all. However, Mendelssohn did go on to prove that his explosive effort at Meydan was no flash in the pan as he finished placed in the Travers Stakes and the Jockey Club Gold Cup.

Hopes had been so high for Mendelssohn after he delivered such a crushing win in the UAE Derby. As a half-brother to Beholder, a multiple Grade 1 winner in the US, Mendelssohn was bred to handle the dirt, and he could hardly have taken to it better at Meydan. He was sent straight into the lead and quickly put his rivals to the sword, the margin between him and the remainder widening with every stride inside the final furlong.

By the time Arrogate signed off with a tame fifth in the 2017 Breeders’ Cup Classic he was a shadow of his former self, so lacklustre that it’s easy to forget that just eight months beforehand he had produced a truly top-class performance to land the Dubai World Cup and cement his status as the best in the world.

Arrogate was unraced as a two-year-old but quickly made up for lost time during his three-year-old campaign, racking up five successive victories, the sequence culminating with a game success over the top-class California Chrome in the 2016 Breeders’ Cup Classic.

Arrogate had shown his class with a thirteen-and-a-half-length success in the Travers Stakes, but a hard-fought victory over a rival as talented as California Chrome showed there was plenty of substance to go with the style.

After readily landing the inaugural Pegasus World Cup, Arrogate was expected to easily extend his winning streak in the Dubai World Cup, but things did not go according to plan as he was slowly away and had to chart a wide passage throughout. He still had plenty to do as they turned for home, but stayed on strongly under a hands-and-heels ride to power two and a quarter lengths clear, proving his champion credentials.

It was an astonishing performance – and it’s just as astonishing that he failed to win again in three starts.

Gladiatorus did win a Group 1 in Europe – the Premio Vittorio di Capua – but he was essentially a massive flop during the second half of 2009, posting dismal efforts in the Queen Anne and Prix Jacques le Marois after expectations had been so high following a stunning success in the Dubai Turf.

A prolific winner in Italy as a juvenile, Gladiatorus did not make the track as a three-year-old but showed he retained all ability when making a successful reappearance in a handicap at the Dubai Carnival, before bolting up in the Group 2 Al Fahidi Fort on his next outing.

That was a hugely impressive victory but the Dubai Turf represented a much stiffer task, over a slightly longer trip and against a top-class field. However, Gladiatorus quickly seized the initiative, opening up a clear lead over the chasing pack, and he never looked like relinquishing the advantage as he continued to pour on the pressure, eventually passing the post with three and three quarter lengths to spare.

The most iconic performance in the history of the meeting was posted by the best horse to have ever run at the Dubai World Cup.

Dubai Millennium was always regarded as an outstanding talent and, after pulling too hard and failing to stay in the Derby, he progressed sharply during the second half of his three-year-old campaign, making a breakthrough at Group 1 level in the Prix Jacques le Marois before signing off with a wide-margin win in the QEII. However, the best was still to come.

Few Flat horses in Timeform’s history – seven to be exact – have posted a performance better than the one Dubai Millennium conjured on World Cup night, when he smashed the course record and was chased home at wide intervals, beating the runner-up by seven lengths with a further six back to the third.

If any further proof were needed that Dubai Millennium was a horse of exceptional ability, he pulverised his rivals in the Prince of Wales’s Stakes, putting on a hugely impressive display of front-running, grinding his rivals into submission.

Sadly, that was Dubai Millennium’s final racecourse appearance and he only sired one crop of foals before dying of grass sickness. However, his legacy lives on through Dubawi, who was a three-time Group 1 winner and has developed into one of the leading sires in the world.