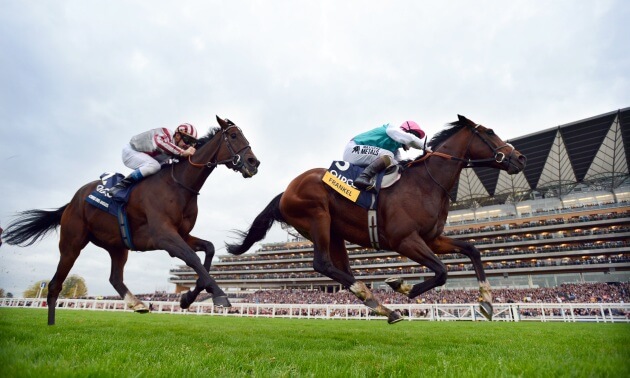 On the anniversary of the tenth British Champions Day staged at Ascot, Adam Houghton remembers the ten winners who have produced the best performances at the fixture according to Timeform ratings.

The Queen Elizabeth II Stakes has produced any number of top-class winners over the years, but the 2011 renewal, at the inaugural British Champions Day at Ascot, was won by a horse like no other in Frankel, who put up another scintillating performance to extend his winning sequence to nine on his final three-year-old start.

The eight-strong field included four other individual Group 1 winners and Excelebration showed top-class form himself to emerge as best of the rest. However, they were all made to look ordinary in the wake of Frankel, who quickened on request to run down pacemaker Bullet Train two furlongs out and then gradually drew clear of his pursuers, ultimately beating Excelebration by four lengths, with Immortal Verse – herself a dual Group 1 winner – another three and a half lengths back in third.

It was the most substantial of Frankel’s wins to that point, earning a Timeform rating of 143 that put him behind only Sea Bird, Tudor Minstrel and Brigadier Gerard amongst Flat horses in Timeform’s history. There would be more to come at four…

9️⃣ years ago today, one of the greatest of all time captured his first QIPCO British Champions Day victory… 🤩

Frankel had already surpassed Sea Bird by the time he made his second Champions Day appearance and swansong in the Champion Stakes, with his astonishing performance in the Queen Anne Stakes at Royal Ascot earlier that season earning him a Timeform rating of 147.

He had proved his stamina for a mile and a quarter when recording another breath-taking success in the Juddmonte International at York two months earlier, and the only lingering concern on Champions Day was the soft ground, the most testing surface he had encountered since his debut.

In the event, Frankel overcame the challenge like he did every other during his career, making it all look fairly routine after recovering from a slow start. He led on the bridle entering the final two furlongs and just needed to be shaken up to assert and win by a length and three quarters from Cirrus des Aigles, whose performance would have been good enough to win an average renewal of the Champion Stakes comfortably.

The tenth Group 1 win of his exceptional career, this victory ensured that Frankel retired with the race record to match his status as the greatest racehorse in Timeform's history, a perfect 14 from 14.

Frankel is now well established as a leading sire, with Cracksman standing out as comfortably his highest-rated runner to date, thanks in no small part to his wide-margin victories in the Champion Stakes in both 2017 and 2018.

Placed in the Derby on just his third career start, Cracksman made giant strides in the second half of his three-year-old season, culminating with a top-class performance to win his first Champion Stakes. He had been a controversial absentee from the Prix de l’Arc de Triomphe but fully vindicated that decision by running away from the opposition at Ascot, relishing the testing conditions as he forged clear in the final two furlongs to win by seven lengths in a style reminiscent of his sire.

Cracksman was kept in training at four, but a prolonged dry spell that summer meant that he saw less action than expected due to his preference for rain-softened ground. Nevertheless, he still ended his career as Timeform’s highest-rated horse of 2018, earning a rating of 136 – for the second year in succession – with an easy win in the Champion Stakes, beating the Hardwicke Stakes winner Crystal Ocean by six lengths in first-time blinkers.

Here's something to get the juices flowing ahead of QIPCO British Champions Day...@Ascot

Two victories that will live long in the memory! pic.twitter.com/MISVQ0OK5C

The first running of the Champions Sprint Stakes as a Group 1 attracted a representative field, including two previous winners of the race. However, the market was dominated by a pair of three-year-olds who had already won four Group 1s between them in 2015, the Sprint Cup winner Twilight Son beating the rest convincingly but ultimately proving no match for Muhaarar.

Muhaarar had won the Commonwealth Cup, July Cup and Prix Maurice de Gheest earlier that season, proving himself a high-class sprinter in the process. Those efforts saw him sent off favourite to bring up a brilliant four-timer on Champions Day, and his supporters never really had a moment’s concern, always travelling strongly and quickly putting the race to bed in the final furlong to land the spoils by two lengths in ready fashion.

That performance surpassed even the pick of his sire Oasis Dream's efforts and identified Muhaarar as the best European-trained sprinter since at least Mozart around the turn of the century – before stablemate Battaash came along, of course!

Muhaarar’s burst of speed 🚀
+ the roar of the crowd 🙌
= an unforgettable QIPCO Champions Sprint for Paul Hanaghanpic.twitter.com/bNN6fP0QX5

This was a deep renewal of the Champion Stakes, featuring a rematch between Almanzor and Found, the first two from the Irish Champion Stakes at Leopardstown five weeks earlier, the latter having won the Prix de l’Arc de Triomphe at Chantilly in the intervening period.

Almanzor was well backed to uphold the form and duly confirmed himself a top-class performer with another clear-cut success. Slowly into his stride, he again demonstrated an impressive turn of foot to lead over a furlong out and kept going well to beat Found by two lengths, with the previous year’s Irish Derby winner Jack Hobbs a length and three quarters further back in third.

The proximity of several of the also-rans prevented an even higher view being taken of the bare form, but a Timeform rating of 133 was still good enough to ensure that Almanzor ended the season as Timeform’s highest-rated horse in Europe.

Who will land it in 2018? pic.twitter.com/QdbLdTYIKf

The first edition of the Champion Stakes at Ascot featured no fewer than seven individual Group 1 winners. In the event, however, it was a horse recording his first win at the highest level who took the spoils, Cirrus des Aigles going one place better than when filling the runner-up spot in the Prix d’Ispahan and Grand Prix de Saint-Cloud earlier that season.

The race panned out ideally for him, tracking the pace on the inside and getting a clear passage when switched out in the penultimate furlong, readily moving up to the multiple Group 1 winner So You Think and then mastering him late on. Three quarters of a length split them at the line, leaving the prolific mares Snow Fairy and Midday to complete the frame in third and fourth, respectively.

Cirrus des Aigles needed to show significant improvement to win such a hot Group 1, ending the season rated a stone higher than on his reappearance. It was a remarkable achievement for a five-year-old who had already made 37 starts before Ascot, and he wasn’t finished yet – he made another 30 starts and retired with a haul of seven Group 1 wins.

He won 22 of his 67 races and earned his connections more than £6 million in prize-money. 🐎

The French ace beat a star-studded field in the 2011 Champion Stakes and was runner-up in the next two renewals.#RacingTVFlashback pic.twitter.com/BtBz1DSdbK

Excelebration lived in Frankel’s shadow for most of his career but built up a highly impressive record of his own along the way, retiring with three Group 1 successes to his name, including a decisive victory in the Queen Elizabeth II Stakes in 2012.

He went about it with a style and swagger that hadn't really been present for his previous Group 1 wins, too, tanking along just behind the pace and only briefly looking in trouble when it seemed like a gap wasn’t going to appear around two furlongs out. He quickly settled matters once in the clear, though, demonstrating a sharp turn of foot to move to the front entering the final furlong, ultimately beating Cityscape by three lengths (well on top at the finish).

It was one of the best performances in the QEII in recent memory and showcased his talents as an elite miler, exceeding anything achieved by the likes of George Washington, Raven's Pass and Canford Cliffs, for example.

Testing conditions, the application of first-time blinkers and a strongly-run race proved the catalysts for a much-improved display from Olympic Glory in the 2013 Queen Elizabeth II Stakes. Still virtually on the bridle as he picked his way through the field to lead over a furlong out, he then drew clear to beat the mud-loving Top Notch Tonto by three and a quarter lengths. He may simply have handled the conditions better than most – including the 2000 Guineas winner Dawn Approach – but it was still hard not be impressed.

That performance has been surpassed in the QEII by only Frankel and Excelebration in the last 10 years, and he proved there was no fluke out it when returning as a four-year-old, also winning the Lockinge Stakes and the Prix de la Foret to retire with a total of four Group 1s on his CV.

Champions Day went ahead at Ascot without the presence of Frankel for the first time in 2013, but a barnstorming renewal of the Champion Stakes filled the void, with Farhh edging out the 2011 winner/2012 runner-up Cirrus des Aigles and Derby hero Ruler of The World in a thriller.

The gallop was relatively steady and the field bunched until approaching the straight, at which point Farhh was the first to act, chased hard first by Cirrus des Aigles and then Ruler of The World, making for a memorable climax. Farhh found plenty to repel the challengers and land the spoils by a neck and half a length, with the fact the first three home put so much distance between themselves and the others – even on heavy ground – highlighting their quality.

Farhh himself had been a bit-part player in the Frankel show in 2012, but at either end of 2013 he showed his brilliance, winning the Lockinge Stakes by four lengths and then returning from five months on the sidelines with another top-class display to win this race, just reward for a horse whose early career had been plagued by injury.