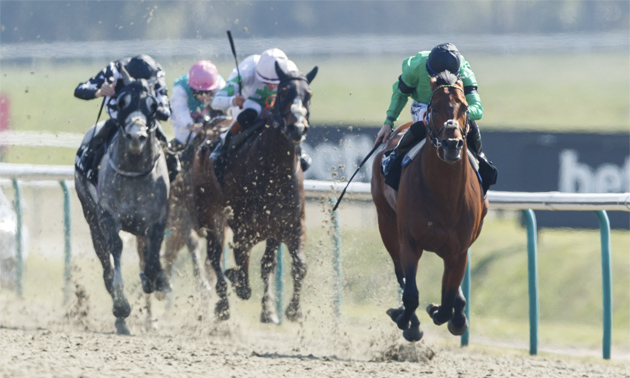 All-Weather Championships Finals Day has been cancelled due to the outbreak of COVID-19, but we’ve decided to crown our own champions based on the best performance in the division this winter.

Sceptical, who is by Exceed And Excel and out of Queen Mary winner Jealous Again, cost only £2,800 as a three-year-old, and that now looks a very shrewd purchase by connections.

He was sent off at odds of 25/1 for his debut at Dundalk in October, but wasn’t beaten far in third behind an Aidan O’Brien-trained hotpot, and he easily landed the odds returned to Dundalk just three weeks later. Sceptical then proved himself a smart performer when winning a handicap (from a mark of 90) in the manner of one well ahead of his mark, travelling with consummate ease and quickening up in good style to assert in the final furlong.

Sceptical took his form to another level on his latest outing at Dundalk, turning a useful handicap into a procession, scoring by six and a half lengths from an 11 lb higher mark. It is unusual to see a sprint handicap won in the manner that Sceptical managed, putting up a performance of rare merit.

Sceptical is an exciting sprinter who is well up to holding his own in pattern company, and would have been incredibly hard to beat in the All-Weather Championship Sprint final.

Urban Icon was an impressive winner of both of his starts as a juvenile in 2018, and kept good company on the turf last season without winning, making his return in the Greenham Stakes at Newbury and going on to run in the 2000 Guineas at Newmarket, developing into a smart performer. His best effort came when beaten a neck by Space Blues in a listed event at Epsom on Derby weekend, form bordering on very smart.

That form made him the one to beat on his all-weather debut at Wolverhampton in a listed event in March, and he duly came out on top, beating a solid all-weather performer in the shape of Documenting.

Urban Icon clearly lacked nothing for fitness on his first start for eight months, travelling well in touch on the inside, before being angled out by Ryan Moore turning into the straight, picking up well to lead inside the final furlong and edging right after. A strong, compact colt he is the type that could progress further on the all-weather, and, still lightly raced for his age, has the profile to go onto even better things.

Finals Day ticket booked for @rhannonracing and Urban Icon as he wins the Lady Wulfruna in impressive fashion under Ryan Moore at @WolvesRaces pic.twitter.com/ntbQ3dpoD6

Dubai Warrior is a brother to Hugo Palmer’s very smart all-weather performer Mootasadir, so is bred to excel on artificial surfaces, and he looked something out of the ordinary when winning a minor event at Chelmsford on debut in 2018. He has largely been kept to the all-weather since, too, his only start on turf coming in a Group 3 at Longchamp last season.

He has won all three starts on the all-weather over the winter, landing a handicap from a mark of 103 at Chelmsford and then a listed race at Lingfield to set him up for a crack at the Winter Derby, in which he started second favourite to Bangkok, who had recently produced a very smart performance to win the trial over the same course and distance on his previous start.

However, Bangkok wasn’t in the same form, and Dubai Warrior improved further to complete a hat-trick, given an excellent ride by Frankie Dettori, kicking off the home turn and drawing clear in the straight. There is little doubt he was seen to good advantage, but he still produced the best performance this all-weather season on Timeform ratings, and was rightly made the ante-post favourite for the Easter Classic on the back of it.

A brilliant ride from @FrankieDettori, who steers DUBAI WARRIOR to victory in the (Group 3) Winter Derby Stakes at @LingfieldPark, kicking clear from the front to put the race to bed! 🏇🏆

Invitational broke her maiden on the all-weather at Kempton last year and looked a useful prospect when following up under a penalty at Wolverhampton on her next start. She wasn’t at her best during the summer last year, but returned to form in the autumn when finishing second in a listed event at Newmarket and winning a similar event at Fontainebleau in November.

Invitational defied a 3 lb penalty to win a minor event at Wolverhampton, looming up over two furlongs from home and winning with more in hand than the one-and-three-quarter-length margin suggests (wandered in the final furlong).

That win qualified her for the Fillies’ and Mares’ race on Finals Day, and she would have taken all the beating, the level of form she had achieved already good enough to have won any of the previous renewals of the race.

INVITATIONAL builds on her French Listed success, claiming victory in good style at @WolvesRaces for @Mitchelljack77 & @varianstable - booking her place in the £150,000 Fillies’ Championship final in the process! 🏇

Mildenberger been beaten by Raymond Tusk at Newcastle and Rainbow Dreamer at Kempton, but he was visually impressive when recording his first success at two miles at Lingfield in January, and proved at least as good as ever when following up at Chelmsford on his final start.

Following his easy win at Lingfield in January, connections confirmed that Mildenberger would be aimed at the Marathon on All-Weather Champions day. It was his Chelmsford victory where he recorded the highest performance of a stayer on the all-weather, though, never far away from the pace and produced to lead entering the straight, hanging left once clear but keeping on well. Admittedly, both of those wins came in four-runner fields, and he would have faced a different test in the Marathon on Good Friday, but given his unexposed profile over staying trips, he would have been a big player in the race.

The final @awchamps qualifier of the season goes to the progressive Mildenberger for @Johnston_Racing, making it two victories in as many starts under Franny Norton @ChelmsfordCRC

He qualifies for the Marathon Final on Finals Day (April 10)

Kachy developed into one of the most popular horses in training over the past two years, his achievements on the all-weather in that time second to none. Kachy won a handicap from a mark of 105 on his first all-weather start at Lingfield in 2018, and went on to win a listed event back there before finishing second to the very smart City Light in the All-Weather Sprint Championships.

The following year Kachy won the same listed event before going one place better in the All-Weather Sprint Championships with a typically authoritative display, leading from pillar to post, and marking himself down as the best all-weather sprinter in Britain.

Kachy was due to make his comeback in the same listed race he had won for the past two seasons, but he was a late withdrawal, and he made a belated return from eight months off in a handicap over the same course and distance. He was in the process of showing he retained all his ability and enthusiasm until meeting a sad end, still in front when suffering a fatal injury at around halfway.

Kachy was one of the stars of the all-weather over the last couple of seasons, with two listed races, an All-Weather Sprint Championship and two course records, among the highlights of his five wins, while his front-running style earned many admirers.

Justified his position as the best all-weather sprinter around in the UK with a typically dominant performance in the Sprint at @LingfieldParkpic.twitter.com/rFZ147N5Xx