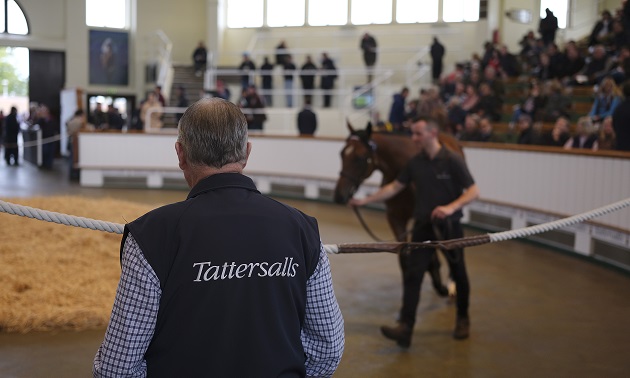 Timeform’s John Ingles examines the pedigrees of the most expensive lots sold at Book 1 of the Tattersalls October Yearling Sale last week.

Filly by Galileo out of Shastye – 3.4m guineas

The brothers Mogul and Japan were denied the chance to contest this year’s Prix de l’Arc de Triomphe due to the contaminated feed issue, but just days later it was their younger sister who made the headlines as the top lot from Book 1 of Tattersalls October Yearling Sale. The filly, who will be joining her brothers at Ballydoyle, fetched exactly the same price as Mogul two years earlier. But they’re not their dam’s most expensive yearlings. Sir Isaac Newton, who also began his career with Aidan O’Brien, had been a 3.6m guinea yearling but failed to live up to his price tag, though he did win the Wolferton Handicap at Royal Ascot and the Group 3 International Stakes at the Curragh as a four-year-old. That makes Japan, the highest-rated (127) of his dam’s offspring to date, seem like a bargain at ‘only’ 1.3m guineas. His wins last year included the Juddmonte International and Grand Prix de Paris, the latter contest also won by Mogul this season. Shastye has bred six winners in all, including Oaks runner-up Secret Gesture, also by Galileo. Shastye was a useful middle-distance performer for John Gosden, with her two best performances coming in defeat, a neck second in a listed race at Pontefract and then a close fifth in the Lancashire Oaks. She was always going to be a valuable broodmare, being a half-sister to the 1998 Arc winner Sagamix.

Filly by Galileo out of Prize Exhibit – 2.8m guineas

Coolmore’s M. V. Magnier also bought the sale’s second most expensive yearling, another filly by Galileo. This one’s pedigree received a major boost in the summer when her dam’s full brother Mohaather put up high-class performances to win the Summer Mile at Ascot and then the Sussex Stakes at Goodwood. Mohaather isn’t the family’s first Group 1-winning miler, either, as he’s a half-brother to the dam of the 2018 Queen Anne Stakes winner Accidental Agent. This filly is the first foal out of Prize Exhibit who began her career with Jamie Osborne at two before enjoying plenty of success as a graded-stakes performer on turf in California in the next couple of seasons. Her biggest wins came in a couple of Grade 2 contests, the San Clemente Handicap at Del Mar over a mile and the Monrovia Stakes at Santa Anita over six and a half furlongs.

Colt by Kingman out of Galicuix – 2.7m guineas

Kingman has quickly established himself among the most sought-after stallions, and news that Enable’s broodmare career starts with a visit to him next year is further proof of his high status. This colt, who is reportedly to go into training with Roger Varian, is not only by a 2000 Guineas runner-up, he’s a half-brother to Galileo Gold, winner of the 2000 Guineas in 2016. All five of the dam’s foals to have raced so far are winners, the latest one being useful three-year-old Eshaasy who won a seven-furlong handicap at Sandown in the summer. Galicuix actually failed to beat a rival in either of her starts, shaping as if amiss both times, but had an eyecatching pedigree to take to stud as a daughter of Galileo from the family of Montjeu. But this is a speedier family than that breeding might suggest as Galicuix is a half-sister to the King’s Stand and Prix de l’Abbaye winner Goldream.

Colt by Dubawi out of Cushion – 2.1m guineas

Godolphin snapped up no fewer than six of the top ten lots at the sale and this colt, by their flagship stallion Dubawi, was the most expensive of them. His dam Cushion might not be a familiar name to many, but his grandam Attraction certainly will be. In fact, the 1000 Guineas winner in 2004 had her own yearling in the sale (by Frankel), and he too was on Godolphin’s shopping list, bought for 1.1m guineas. Cushion is one of eight winners Attraction has produced to date, the pick of them being the very smart Elarqam (a 1.6m guinea yearling himself, also by Frankel) whose latest win came in the Group 3 Legacy Cup Stakes at Newbury last month. As for Cushion, a daughter of Galileo, she won a Newbury maiden over a mile and a quarter for John Gosden and was placed in listed races before gaining a second win at four in the USA where she was placed at Grade 3 level. Her first foal Bright Idea has been placed in three of his four starts in Ireland for Joseph O’Brien, showing fairly useful form.

Filly by Frankel out of Fleche d’Or – 2m guineas

This Frankel filly was another purchase by Godolphin who had to go to 3.1m guineas to secure her full brother Dhahabi at the same sale last year. That colt has made a promising start to his career, winning a maiden on the Newmarket July course on his debut in the summer and more recently finishing third in the Autumn Stakes on the Rowley Mile. Dhahabi became the fifth winner for his dam whose foals have become hot property since she produced a top-class colt early in her broodmare career, the Derby and Arc winner Golden Horn. Fleche d’Or was unraced herself, but she had no fewer than ten winning siblings, including the Coronation Stakes winner Rebecca Sharp and the Cheshire Oaks winner Hidden Hope. Frankel has already had success with this family as he’s the sire of Hidden Hope’s smart three-year-old filly Frankly Darling, winner of the Ribblesdale Stakes and third in the Oaks.