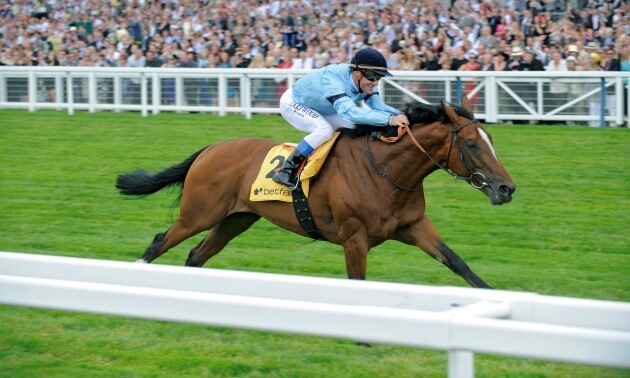 Harbinger didn’t meet expectations as a three-year-old after his easy Gordon Stakes win, but he developed into an outstanding performer as a four-year-old, starting with a smooth success in the John Porter at Newbury.

Another step forward followed as Harbinger produced a high-class effort to land the Ormonde at Chester, before making it three from three for the season with a dominant display in the Hardwicke, proving himself well and truly ready to take on the very best. He got that opportunity on his next start, when coming up against his strongly-fancied stablemate and Derby winner Workforce in the King George at Ascot.

In the event, it was Harbinger who produced one of the greatest performances in the 60-year history of the race, cruising to the front in the straight before drawing right away in the final furlong to win by a record 11 lengths, crowning his relentless progress for the year with a flawless display.

Sadly he met with injury and never raced again, but his King George performance is considered one of the finest in Timeform's history. Sir Michael Stoute

On this day nine years ago, we witnessed one of the most awesome performances in the history of the King George... take it away Harbinger! @Ascot pic.twitter.com/Wu03kkT7QU

Rail Link’s first win came at the third attempt, in a Saint-Cloud maiden, and was quickly followed by his first success at pattern level as he recorded an easy victory in the Prix du Lys at Longchamp.

He handled the step up to Group 1 company, showing improved form to win the Grand Prix de Paris, the one-and-three-quarter-length success marking the progressive colt down as a contender for the Prix de l'Arc de Triomphe.

He wasn't particularly impressive when beating Youmzain in noted Arc trial the Prix Niel, but he always appeared to be doing enough to win. The level he showed in the Prix Niel was some way short of that required to win an Arc, but he was clearly a horse on an upward curve, whose progress was being overseen by master trainer Andre Fabre, and he peaked on the big day, getting the better of three of the best middle-distance colts in the world in Deep Impact, Hurricane Run and Shirocco, as well as holding off a late rally from the high-quality racemare Pride. Andre Fabre

Flintshire didn't race as a juvenile but he quickly reached a high level as a three-year-old, landing the Group 1 Grand Prix de Paris on just his fourth start. He was promoted to the head of the betting for the 2013 Prix de l'Arc de Triomphe on the back of that success but he was beaten in the Prix Niel and disappointed in the Arc itself, finishing only eighth on ground considered softer than ideal.

He showed improved form the following season, though, running well in defeat on a number of occasions, including when runner-up in the Arc and Breeders' Cup Turf, before breaking his duck for the campaign with a win in the Hong Kong Vase.

As a five-year-old Flintshire continued to often find one too good, finishing second in five of his seven outings of 2015, including when beaten by Golden Horn in the Arc.

He was then sent to trainer Chad Brown to continue his career in the States, and he enjoyed a good deal of success, winning three of his five starts, including twice at Grade 1 level. His career finished, almost fittingly, with another runner-up finish in the Breeders’ Cup Turf. Andre Fabre

The Fugue was successful once in Group 1 company as a three-year-old, showing a sparkling turn of foot to win the Nassau in ready fashion, but she was unlucky not to have enjoyed more success at the highest level as she did well to finish third in the Oaks having been badly hampered and shuffled back, while she also shaped best when getting no sort of clear run in the Breeders' Cup Filly & Mare Turf.

She added to her Group 1 haul as a four-year-old, though, landing the Yorkshire Oaks before producing a career best to win readily in the Irish Champion Stakes. The Fugue was kept in training as a five-year-old and proved at least as good as ever when a smooth winner of the Prince of Wales’s Stakes at Royal Ascot, where she got the better of Magician and Treve. John Gosden

The Fugue was narrowly denied in the Yorkshire Oaks in 2012, but returned 12 months later to destroy her rivals 💪 What a performance! @yorkracecourse #ClassicEbor #YorkshireOaks #HappyHour pic.twitter.com/pIhXS3N1Oz

Zacinto’s juvenile season encompassed an eight-length maiden success and a promising second in the Champagne, which marked him down as a leading Guineas candidate until he suffered a setback in March.

He posted an impressive success on his reappearance in a listed event at Goodwood and then enhanced his reputation when finishing second past the post behind Delegator - Zacinto was subsequently awarded the race after Delegator tested positive for a banned substance.

Having quickly made up into a high-class performer, Zacinto took a further big step forward in the Queen Elizabeth II Stakes, beaten only by a horse of the highest calibre in Rip Van Winkle. Unfortunately, however, Zacinto failed to progress from that effort, and was all but pulled up in the Breeders’ Cup Mile on his last appearance as a three-year-old before completely regressing the following season. Sir Michael Stoute

Bated Breath quickly made up into a promising three-year-old, winning three of his five races in his debut campaign, before continuing to progress in good style the following season, claiming a minor event a Haydock before disposing of some smart opposition in ready fashion in a listed event at Windsor.

Roger Charlton’s charge found just one too good three times at Group 1 level that season, in the July Cup, Sprint Cup and Nearctic Stakes (in Canada), but he deservedly opened his account in pattern company the following year, landing the Temple Stakes on his return.

He matched his Temple form in the King’s Stand but found Little Bridge just too strong, while he was also placed at the highest level on his final outing in the Sprint Cup. Roger Charlton

Delegator was perhaps somewhat unfortunate to be around at a time when so many impressive milers were at the top of their game. After winning the Craven in taking style, Delegator was beaten by Sea The Stars in the 2000 Guineas, before Mastercraftsman got the better of him in the Irish 2000 Guineas (Delegator was well below form in eighth) and the St James’s Palace.

After his second to Mastercrafstman on the latter occasion, Delegator was purchased by Godolphin and moved from Brian Meehan's yard to Saeed bin Suroor. He made what appeared to be a cracking start for his new owners when runninh out a comfortable winner of the Celebration Mile, though he was subsequently disqualified after a prohibited substance appeared in his sample.

He stood very little racing over the following three seasons, running just nine times, winning on three occasions, notably when dropping back to six furlongs to land the Duke of York. He showed smart form for Bin Suroor but couldn't quite recapture the level he had shown in the early months of his classic campaign. Brian Meehan

Delegator, runner-up to Sea The Stars in the 2000 Guineas in 2009, finished with a flourish to land the Duke Of York Stakes two years later.#DanteMeetingMemories #RacingTVFlashback @yorkracecourse 🐎 pic.twitter.com/FnYGTirhT1

Famous Name was one of the most prolific, reliable performers on the scene and a real credit to connections.

He showed talent from the outset, winning his maiden by seven lengths at Naas, and he was also impressive on his first start as a three-year-old, justifying odds-on favouritism in the Leopardstown 2000 Guineas Trial. Firm ground meant he was pulled out of the Irish 2000 Guineas but he very nearly rewarded connections' patience when an excellent second in the French Derby.

His season turned into something of an anti-climax, winning just one listed race from three subsequent outings, but he was an improved performer the following year, rattling up a hat-trick at the Curragh and finishing runner-up in the Prix du Moulin.

Famous Name would continue to mop up Group 3 and Listed contests, winning eight in total across 2010 and 2011, and he gained a first victory at Group 2 level when successful in the 2012 Royal Whip Stakes as a seven-year-old during what would be his final campaign. He won seven of his nine starts that season, bowing out with 21 wins to his name, including 13 at Leopardstown, where he was especially effective. Dermot Weld