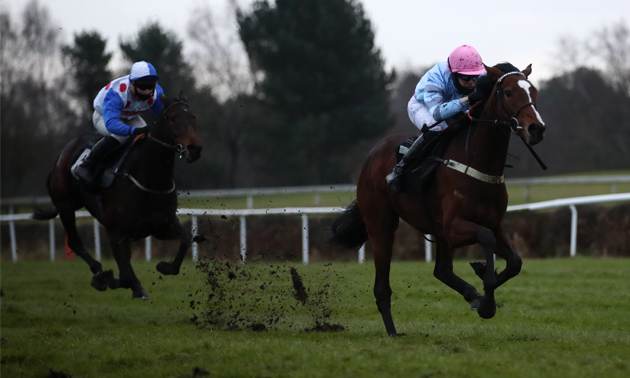 Pam Sly is likely to bypass the Cheltenham Festival with Eileendover – with Aintree and then a Flat campaign instead at the forefront of her mind.

The granddaughter of Sly’s 1000 Guineas winner Speciosa stretched her winning run in bumpers to three in impressive fashion at Market Rasen on Saturday.

Not surprisingly quotes were flying around for the championship event in March in the aftermath, but Sly favours keeping the filly to her own sex at Aintree before aiming for some nice prizes on the level.

“She’s fine and out in the field, not a bother,” said the Cambridgeshire trainer.

“I was surprised how well she won given the (heavy) ground, really. She’s not bad.

“I know she was getting the weight, but I don’t think it would have made a difference. She’s not even four until March.

“I was already thinking of the Flat for her before this – I only ran her in her first bumper because I ran out of time on the grass, but we didn’t know she was this good.

“That might sound ridiculous, but I don’t gallop mine a lot at home – she just worked with the other jumpers, and I thought she’d be OK to have a run round.

“I think the Aintree mares’ bumper is the ideal race for her – I’m not over-keen on the Cheltenham one, especially with a four-year-old filly. I think that race can knock them off their perch, and they have a job to come back from it.

“With Aintree, I can let her off for a whole month now and bring her back in the middle of February.

“After that, I don’t know whether I’d go for a handicap or even a Listed or a Group Three. I might be flying my kite a bit high, but you just don’t know until she is beaten.”

Unsurprisingly Sly, along with her son Michael, has had to resist some fairly big-money offers since Eileendover burst on the scene – but she reiterated the filly is not for sale.

She added: “Paul O’Brien came to ride her out last week and felt she’d grown. I suppose because I see her every day, you don’t notice, but she’s filling out and getting stronger.

“We’ve had lots of messages, and I did have one man ring, but she’s not for sale. My son doesn’t want to sell – we want the fun ourselves, (and) also we breed as well. We’ve a few of her relatives to come.”