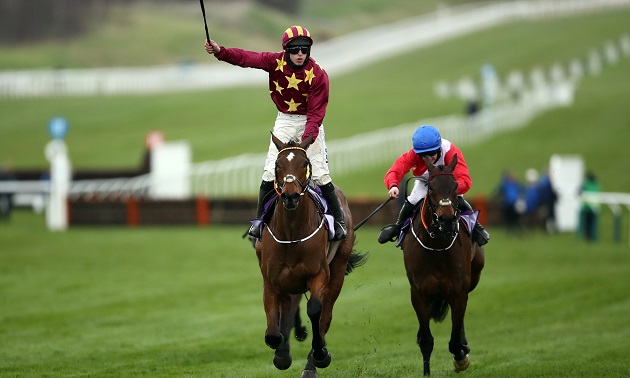 John Ingles takes a long-range look at the 2022 Gold Cup at the Cheltenham Festival and gives you Timeform's best ante-post bet.

While Al Boum Photo failed in his bid to become the first horse to win three Gold Cups since Best Mate, the form he showed in finishing third was very much on a par with his successful efforts in the two previous renewals. That’s cold comfort, of course, for those who had made him favourite to win it again, but it serves as a reminder that there are always younger, and potentially better, rivals coming through and it accounts for why repeat winners of the Gold Cup are relatively rare.

Al Boum Photo met two such horses in the latest Gold Cup, and winner Minella Indo sets a high standard for any challengers to his crown next season. While his last two starts at Leopardstown, including a fall, had dented confidence in his Gold Cup chances, he bounced back at a track where he had twice run well at past Festivals. He jumped as well as any in the Gold Cup bar Frodon, crucially so at the last couple of fences, and he saw the trip out well to beat stable-companion A Plus Tard by a length and a quarter. Minella Indo is young enough to build further on an already excellent record and seems sure to go well in another Gold Cup bid.

A @HenrydeBromhead 1-2 as Minella Indo sees off stable companion A Plus Tard in the 2021 WellChild Cheltenham Gold Cup for @jackkennedy15 #CheltenhamFestival pic.twitter.com/3eMx5vOWKm

A Plus Tard, a year younger than Minella Indo, took his form up another notch tackling the longest trip he’s yet faced, and it clearly wouldn’t take much for the placings of the first two to be reversed in any future encounters. It’s harder to see any of the rest of the latest Gold Cup field winning the race another year. Admittedly, Champ stormed home to beat Minella Indo and Allaho – outstanding winner of the Ryanair at the latest Festival – in the 2020 RSA, but fresher in the memory now is  his contrasting performance when the first beaten in the Gold Cup, with his jumping letting him down from an early stage.

Minella Indo’s greatest threats to retaining his title could well come from the current novice division, even though neither Monkfish nor Envoi Allen, two of its stars, produced performances to match the reputations they brought with them to the Festival. Monkfish got the job done in the Brown Advisory Novices’ Chase (the old RSA) but didn’t jump as well as he can and certainly didn’t need to run to his best to keep his unbeaten record over fences in a weak race. But it’s not hard to see why he’s ante-post favourite for the 2022 Gold Cup judged on his impressive performances in Ireland which leave him with only a little more improvement to find to trouble the Gold Cup principals.

🐎Envoi Allen remains unbeaten after landing the @SkyBet Killiney Novice Chase in the hands of @jackkennedy15 for @gelliott_racing 👏 pic.twitter.com/HUyB8c5cHo

Available at longer odds, though, is Envoi Allen, following his fall in the Marsh Novices’ Chase won by Chantry House. But for that setback he could well be challenging for Gold Cup favouritism himself, but that was the first time he has put a foot wrong in his career so far.  His enormous potential is still intact and as Al Boum Photo proved, it’s quite possible to fall at the Festival one year and win the Gold Cup the next. With plenty of scope for his odds to contract, Envoi Allen looks the value option among the three Gold Cup contenders that Henry de Bromhead now has on his hands.