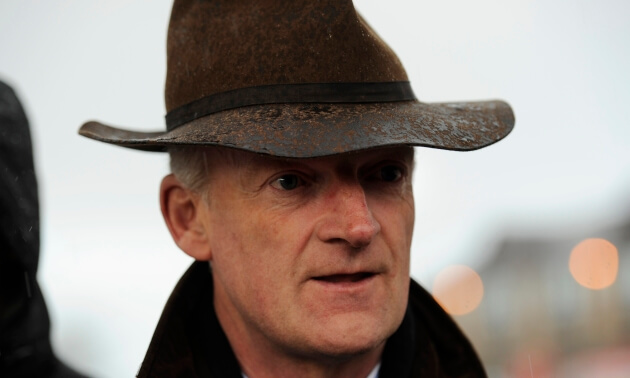 We profile three trainers who could be fighting it out for top honours at the 2020 Cheltenham Festival.

Willie Mullins has won the leading trainer award at the Cheltenham Festival on six occasions since 2011 – including when saddling a joint-record eight winners in 2015 – and he again took top honours with four wins at last year’s meeting, namely Klassical Dream in the Supreme, Duc des Genievres in the Arkle, Eglantine du Seuil in the Dawn Run and Al Boum Photo in the Gold Cup.

That was Mullins’ first success in the blue riband, but he has enjoyed much more success in several of the other Grade 1 events. The Festival’s all-time leading trainer, his 65 wins include nine in the Champion Bumper, six in the Supreme and four in the Champion Hurdle. Mullins is responsible for only two of the 31 entries for the 2020 Champion Hurdle – Aramon and Sharjah – though he still has the option of supplementing the very smart mare Benie des Dieux.

One notable omission from Mullins’ CV is the Champion Chase, but he looks to have leading claims of putting that right in this year’s renewal with Chacun Pour Soi, who features prominently in the market after an impressive defeat of stablemate – and leading Ryanair contender – Min in the Dublin Chase at Leopardstown last time.

Defending champion Al Boum Photo and Kemboy lead a formidable challenge for their trainer in the Gold Cup, while Mullins will also be hoping to add to his remarkable tally with the likes of Carefully Selected (National Hunt Chase) and Appreciate It (Champion Bumper), both of whom head the market for their respective races at the Festival.

Gordon Elliott won the leading trainer award at Cheltenham for the first time when saddling six winners in 2017, and he reached even greater heights when repeating the dose 12 months later, matching the feat achieved by Mullins in 2015 by hitting the target eight times.

Elliott was also responsible for three winners at last year’s Festival and that trio are all set to bid for further success at the meeting in 2020. Sire du Berlais has been quietly campaigned as he attempts to repeat his win in the Pertemps Final, while Envoi Allen and Tiger Roll both look banker material for their respective races.

Also the winner of the Triumph Hurdle in 2014 and the National Hunt Chase in 2017, the great Tiger Roll has won the last two renewals of the Cross Country and looks to hold standout claims in his hat-trick bid – en route to Aintree, of course – while Envoi Allen was a determined winner of last year’s Champion Bumper and is currently a short-priced favourite for the Ballymore after sweeping all before him in the novice hurdling division so far this season.

Other key runners for Elliott at this year’s Festival include Abacadabras (Supreme) and Champagne Classic (National Hunt Chase), not to mention Delta Work in the Gold Cup, a race his trainer won with Don Cossack back in 2016.

Delta Work won the Pertemps Final in 2018 and has established himself as a top-class chaser with wins in the Savills Chase and the Irish Gold Cup on his last two starts at Leopardstown; he is now as short as 5/1 to complete a high-profile hat-trick in the blue riband.

Nicky Henderson (64) is only one winner behind Willie Mullins in the list of the Festival’s all-time leading trainers, and there was even less to separate them at the meeting last year, when both men saddled four winners – Mullins eventually landed the spoils with his five seconds against Henderson’s four clinching it.

As a result, you have to go back to 2012 for the last time Henderson won the leading trainer award at Cheltenham, with his seven wins that season including the Arkle with the outstanding Sprinter Sacre, who would return to the Festival to land the Champion Chase in both 2013 and 2016.

Altior wins the Win Bigger On The Betfair Exchange Chase at @NewburyRacing and is back on track!

Henderson is the joint-most successful trainer in the history of the Champion Chase with six wins overall, and he will take the lead outright if Altior can complete a hat-trick in the race at this year’s Festival. Admittedly, it looks likely to be a tougher test for Altior than when successful in 2018 and 2019, but he looked as good as ever when getting back to winning ways at Newbury last time and remains very much the one to beat.

The team at Seven Barrows for Cheltenham also includes exciting up-and-comers such as Shishkin (Supreme) and Champ (RSA), not to mention leading contenders for both the Champion Hurdle and the Gold Cup.

Epatante is no bigger than 10/3 for the first-named event after her impressive Kempton win on Boxing Day, while Santini got his blue riband claims back on track with a gutsy success in last month’s Cotswold Chase and now has only Al Boum Photo ahead of him in the ante-post betting.

HUNTINGDON 13:41
21% Kim Bailey's strike rate at HUNTINGDON since the start of the 2014/15 season (saddles LADY OF THE NIGHT)
£10.92 Olly Murphy's profit to a £1 level stake with hurdling debutants (saddles DEL DUQUE)
21% Harry Fry's strike rate with hurdlers at up to 2m2f (saddles SHALL WE GO NOW)
Tweets by @Timeform